Construct of the Week #30 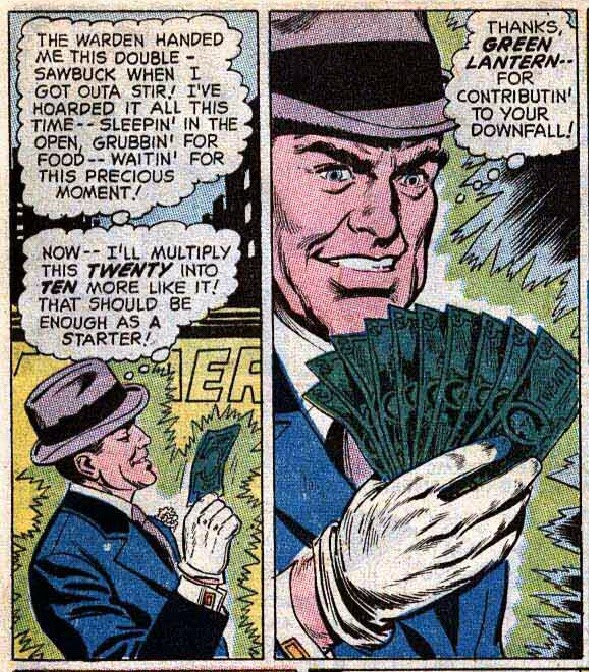 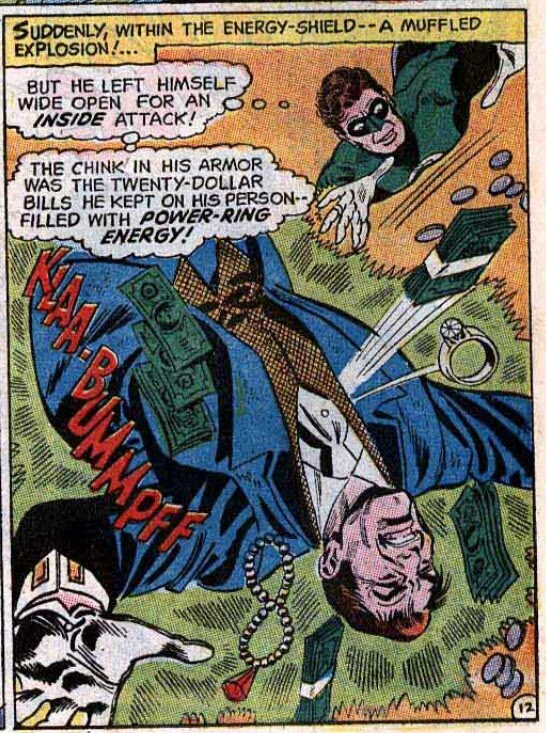 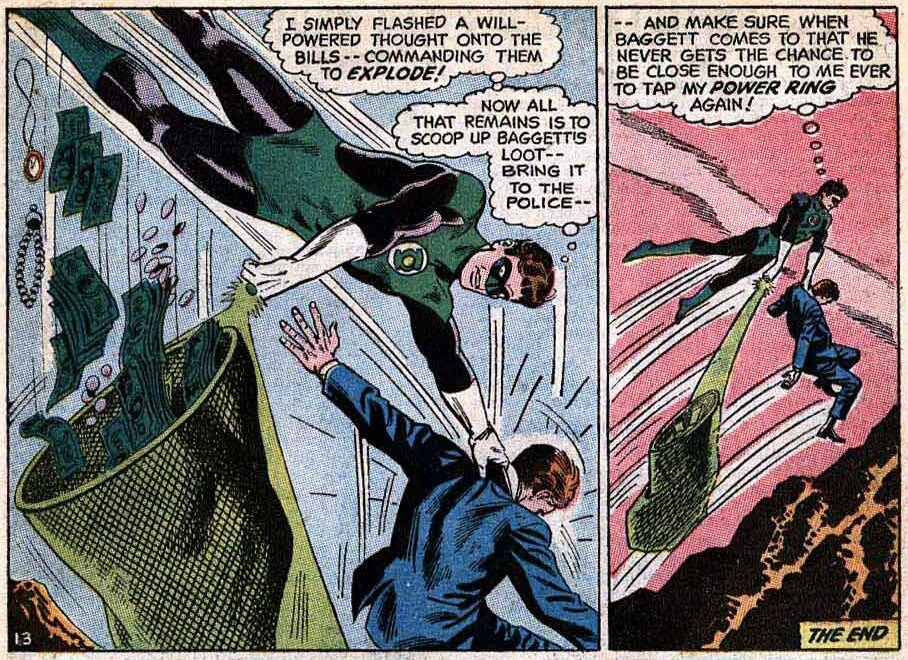 Email ThisBlogThis!Share to TwitterShare to FacebookShare to Pinterest
Labels: Construct of the Week, Hal Jordan

The Wearin' o' the Green 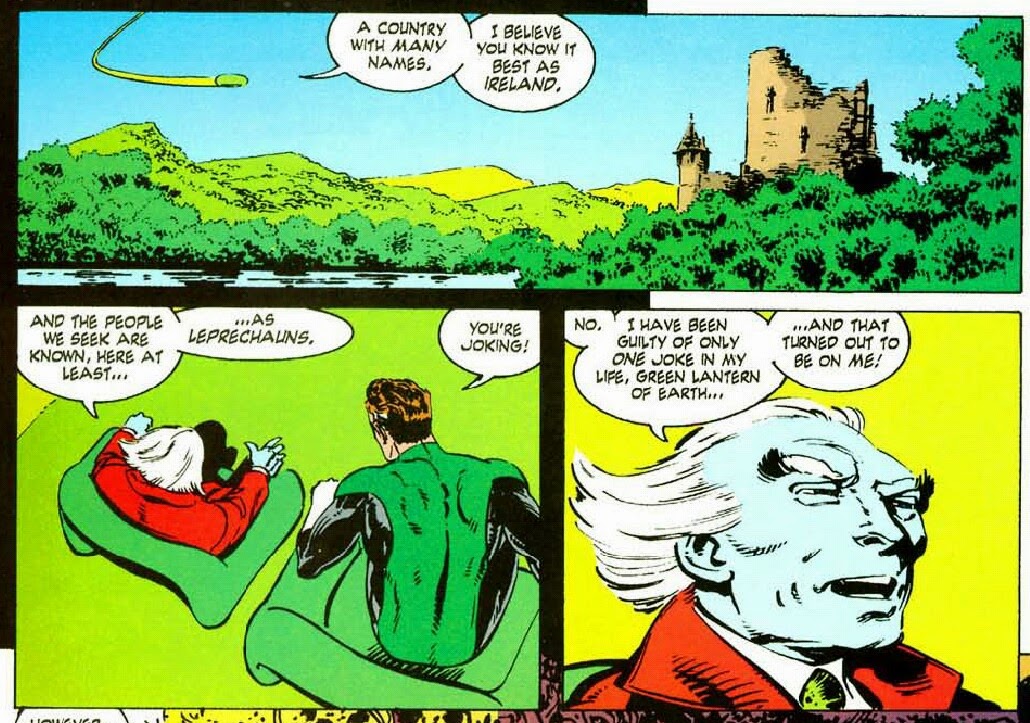 It's not surprising that Green Lanterns take their St. Patrick's Day celebrations seriously.  Especially after Ganthet revealed that the Guardians of the Universe and the Leprechauns are long-lost cousins! 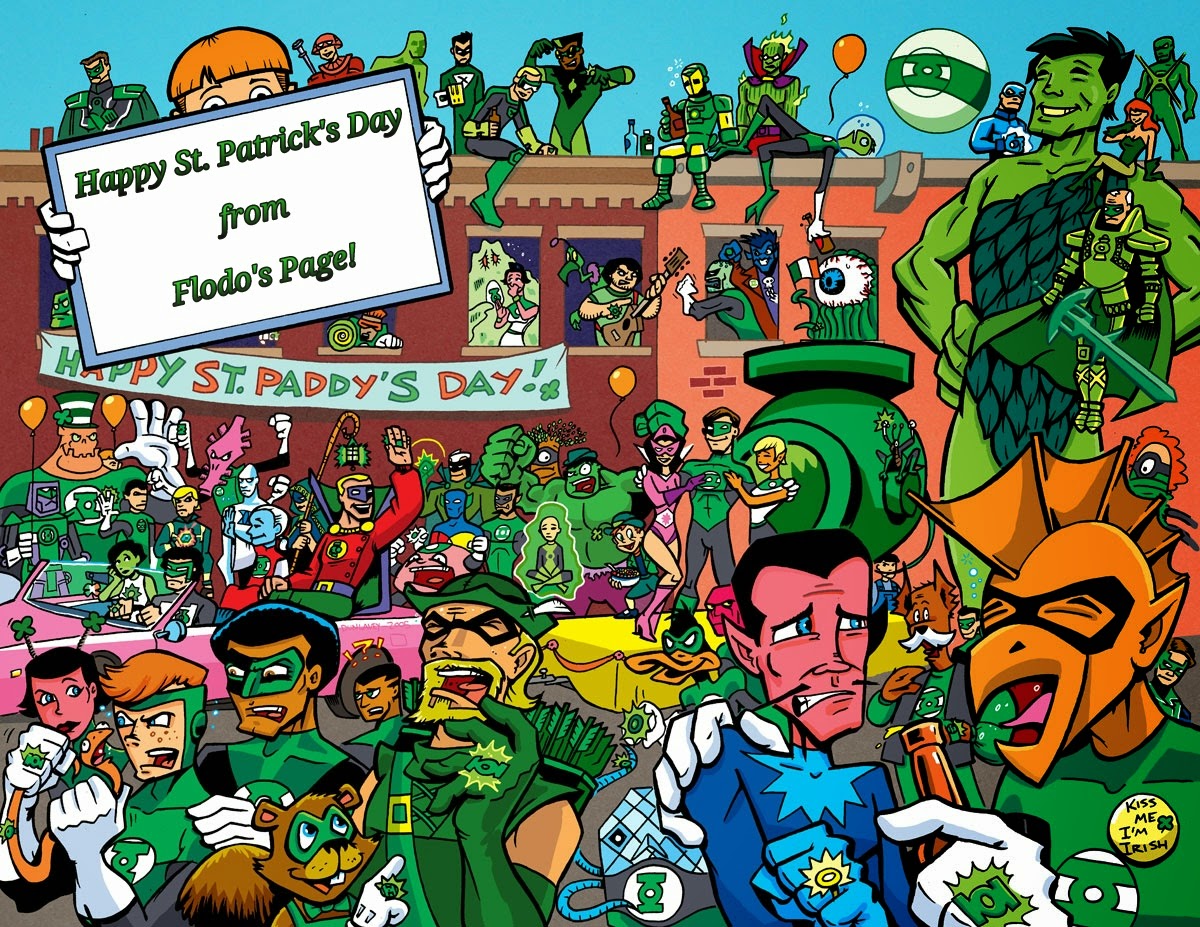 Unfortunately I don't know who to credit for this mighty gathering of the Green Corps and their Green friends but it was too much fun not to share.  I picked it up on TheGreenLanternCorps.com forum thread from back in 2009. 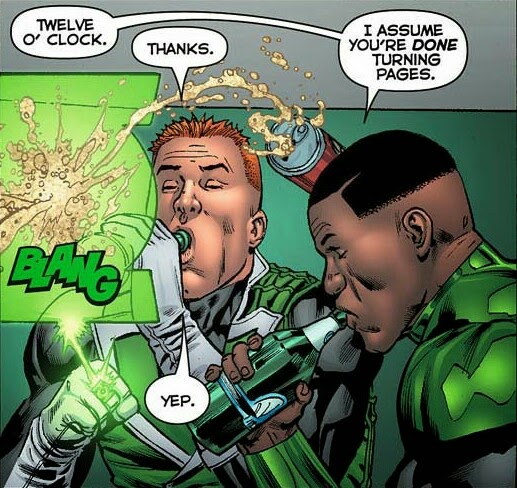 In the world of bags and boards I'd be the first to admit that I am not a massive fan of variant covers.  I'm more of a story guy than an obsessive collector so when my local comic shop retailer offers me a "rare" variant cover edition at "only slightly more" that the regular price I tend to politley decline.  I understand the fascination, particularly for readers whose buying habits are influenced by admiration for a certain artist, but it's not really for me.

Last month, however, DC Comics ran a line of variant covers across a number of their titles that managed to capture both my eye and my imagination.  The theme they had opted for was 'Steampunk'.  For those who don't know, steampunk is a branch of science-fiction that reimagines the world as having evolved on the back of steam-powered machinery and innovation instead of the electronic technology we are are familiar with in our own lives.  The fashions associated with the genre draw from Victorian times, a kind of warped industrial meets formalwear affair. 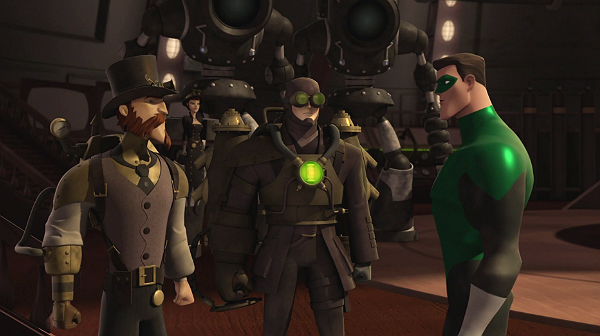 Steampunk is especially relevant to Lantern fans after the much loved and sadly missed show, Green Lantern: The Animated Series produced an episode called 'Steam Lantern' that played joyfully in that toybox.  The episode was a lot of fun!  You only have to 'google' "Green Lantern Steampunk" to see how many fans have incorporated the theme into their GL comic con cosplay.

The first of our books to get the retro-futuristic treatment is Green Lantern Corps #28.  The cover by Howard Chaykin and Jesus Aburtov shows John Stewart and a character who I assume to be Guy Gardner depicted as wealthy engineers.  A stylized setting includes a giant cog-wheel construct in the background.  The power batteries are formed from orbs that convey a distinctive sci-fi quality in their design.

It is interesting that the artist chose to include Guy who now leads the Red Lanterns.  Despite it's thematic presentation I feel a nostalgia for the great adventures these two veterans shared together during Tomasi's run on Corps.  And I've got to wonder how a real life red-blooded male like Guy might take to neck ruffles and coiffured curls.  Not too well I imagine! 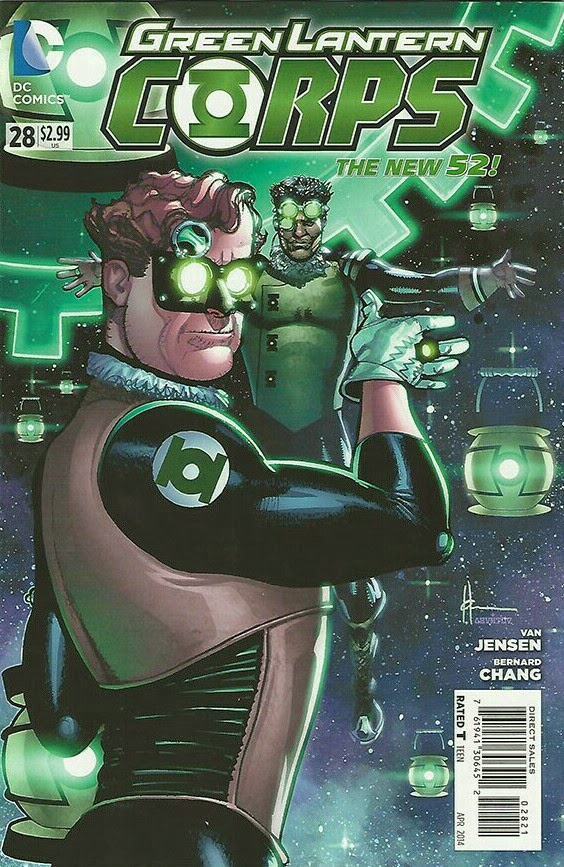 The following week Klaus Janson and Jose Villarrubia gave us a wonderful rendition of White Lantern Kyle Rayner and Star Sapphire Carol Ferris on the cover Green Lantern: New Guardians #28.  This is classic hero stuff with the cut off Kyle's costume being very much reminiscent of a First WWI flying jacket.  I'm reminded of the Rocketeer comics which is odd since stunt pilot Cliff Secord from those books  has much more in common with the Hal Jordans of this world than an everyman like Kyle.  I also really like the shutter signal lamp that forms the white power battery.  Signal lamps like this have been used on naval vessels since the beginning of the 20th century and are still in use today.  Very steampunk! 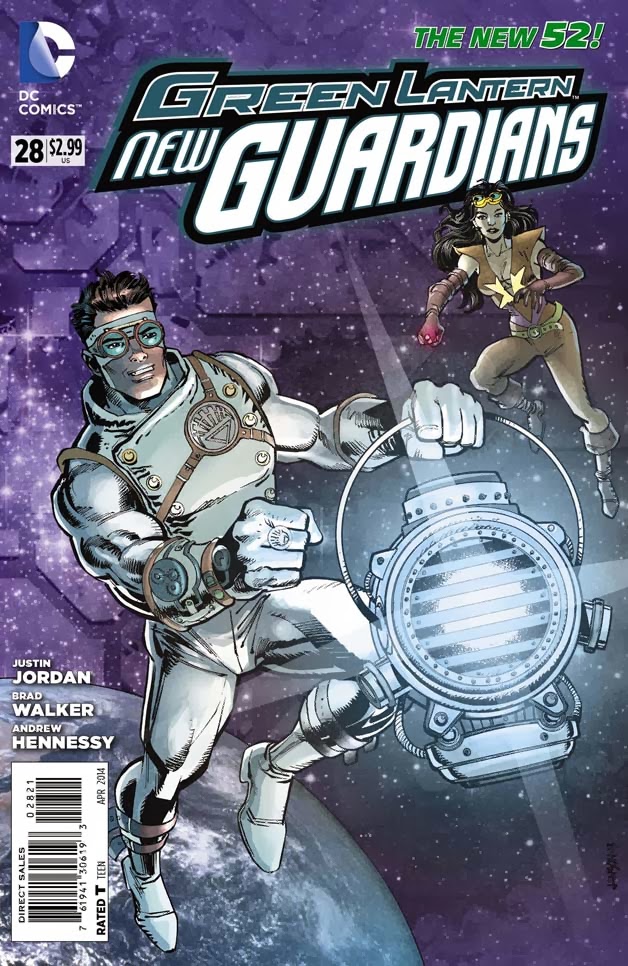 Moving outside the realm of Green Lantern's core universe (I've been looking for an opportunity to drop that pun for months!), the other title that warrants our attention is Earth 2 #20.  The cover, which was first previewed on Comic Book Resources, brings together Earth 2 teammates The Flash and Green Lantern with a character they haven't encountered yet in the actual story, namely Batman.  This image from Dan Panosian is exquisite for so many reasons not least of which is the Batmobile with the huge steam chimney poking out the front of it.  I love how Flash's Mercurial helmet has metal exhaust pipes in place of the traditional feathered wing tips. 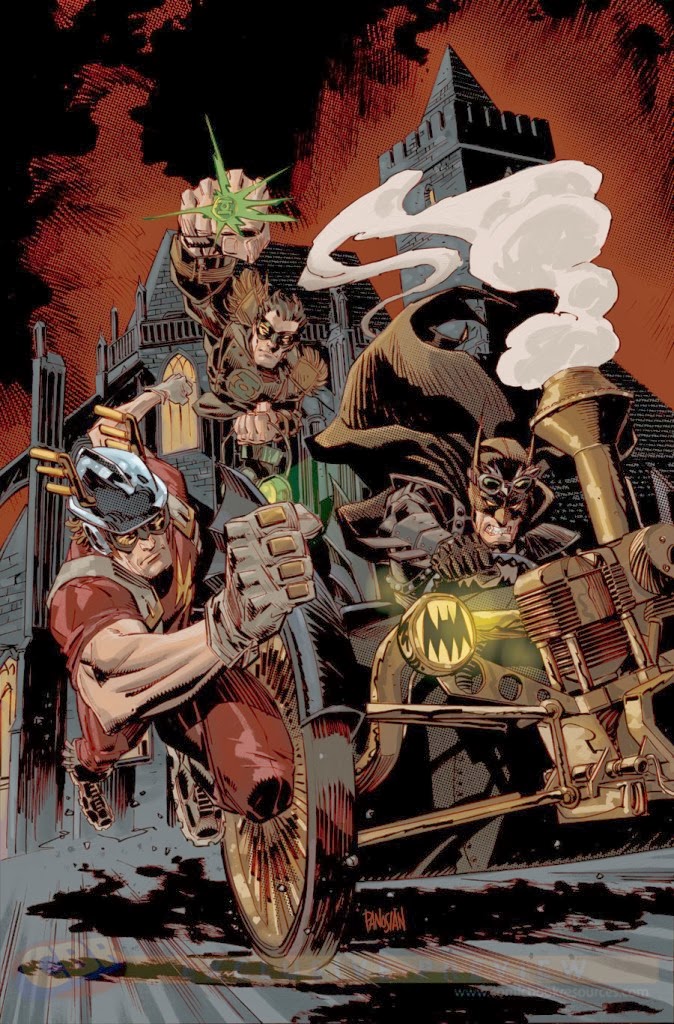 More interesting than all of this for a fan of my particular geeky persuasion is the appearance of Green Lantern in the scene.  Our GL sports a ring and chest patch bearing the emblem of the Green Lantern Corps who, as the continuity currently stands, does not exist in the dimension where Earth 2 is located.  The situation could change very quickly of course but, coupled with the fact that the hero in question bears more of a resemblance to Hal than his E2 counterpart, I would be willing to bet that Panosian hasn't been keeping up with his New 52 properly.

Imagine my surprise when I finally clapped eyes on #20 when it hit the stand at my LCS.  The Green Lantern character had been flipped on his axis and had his hair recoloured blonde a lá Alan Scott.  Perhaps the cover was originally intended to dress an issue of Justice League where GL's raised right hand might have created more space for the longer title logo.  The left hand in the air fits snugly against the numerical element of Earth 2's header. 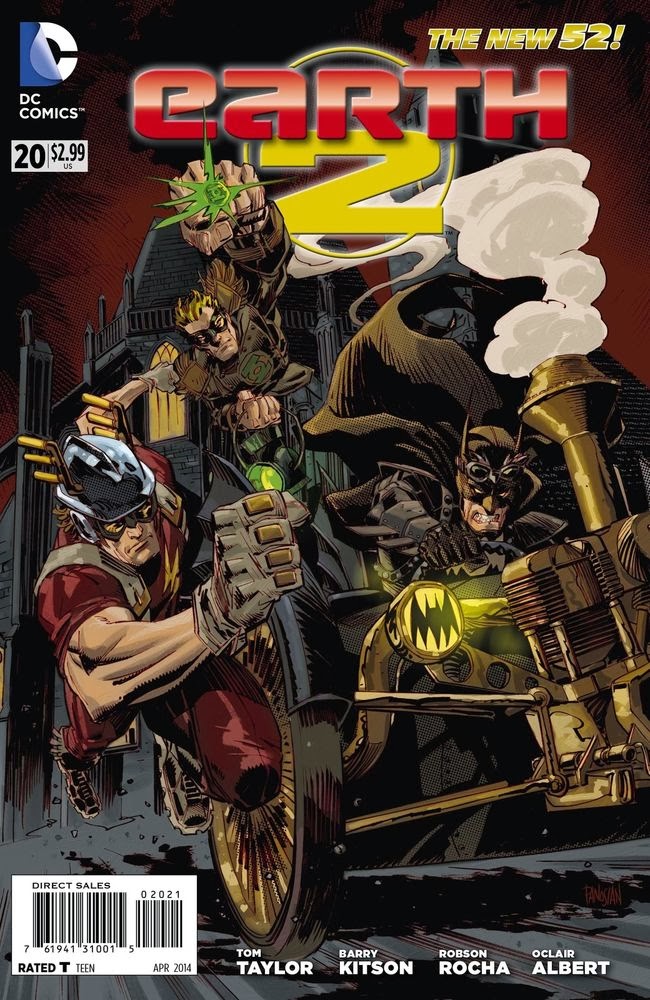 The power battery here in our final image is much closer in appearance to the lanterns we encounter every week in normal DCU continuity.  Mind you, it's perhaps not such a strange an occurrence when you consider it in context.  The lantern of Golden-Age Alan Scott was cast in the shape of a regular, old-fashioned railway lamp found during the heyday of steam powered transportation.  This was one of the few things about GL that survived into the Silver-Age under the guiding hand of legendary editor Julius Swartz.  In fact, it could be said that Green Lantern has always led the field when it comes to superhero steampunk!

Love it or loath it, it's fair to say the 2011 Green Lantern film didn't exactly capture the imagination of the wider movie-going public.  My own hope is that it will take on a cult status to be watched and treasured by a discerning following for many years to come.

Lantern fans are well known for their love of history, whether real or fictional.  In these days of multi-million dollar budgets and stunning CGI special effects there are few outside of our little group who give much attention to the 1951 classic Green Lantern and the Menace from Planet Qward.  Not only is the film a B-movie science-fiction masterpiece but it is also famous for being Warren Beatty's very first appearance on celluloid, a full ten years before Splendour in the Grass brought him critical acclaim and box-office success. 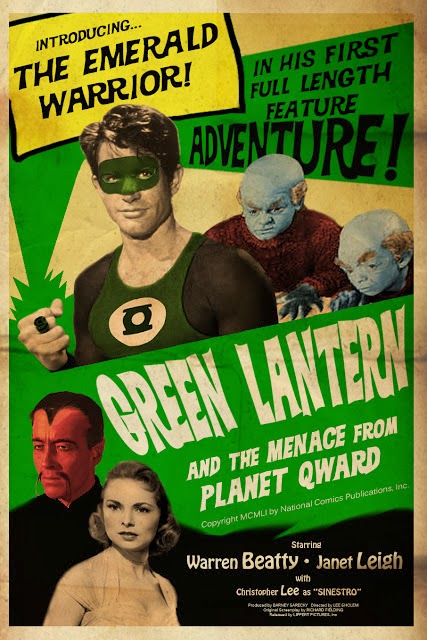 OK, ok.  The eagle-eyed amongst you will have spotted that our poster depicts a Silver-Age GL and his masters, the Guardians of the Universe. These characters, whilst inspired by the rising popularity of 1950s sci-fi, did not make their débuts in comics until late 1959 and mid 1960 respectively.  This wonderful image is actually the creation of Photoshop aficionado Paul Cornish who produced it in the 50s/60s style as a tribute anticipating general release of the previously mentioned Green Lantern, 2011.

I think you'll agree Paul has captured all the best elements that make movie posters of that era so collectable today.

You can read Paul's original post here.  I highly recommend you check out his blog, Last of the International Fanboys, for a plethora of comic book curiosities and all things geek, and follow him on Twitter @PaulGCornish.