THE AGE OF IMAGINATION

Ask any DC Comics fan "What is the most powerful weapon in the universe?" and you will invariably get the response, "A Green Lantern's power ring."  This tag-line that has been associated with the rings for a good many years, along with, "limited only by the wearer's imagination".  In modern times the ring has four main functions: invulnerability, flight, communication and creating constructs.  It is these constructs that are affected by the potential of a Green Lantern's imagination. (Check out my regular 'Construct of the Week' posts for more mind-boggling GL constructs).  Occasionally the rings are seen to do other things, like when Simon Baz brought his brother in law out of a coma, but such occurrences are rare.

Back in the Silver-Age, however, things were very different.  In those days the rings abilities were literally limited only by imagination - the writer's imagination that is.  I've previously posted brief observations of Green Lantern mimicking the power sets of his Justice League colleagues, and this is something I want to look at in more detail in the future.  For now I’d like to share my enjoyment of one particular story that has all the hall-marks of a Silver-Age classic.

Green Lantern #36 (vol. 2) has a cover date of April 1965.  The issue contains virtually every element you might look for in a Gardner Fox/Gil Kane GL original.  Flipping past its gripping cover we are treated to two complete super-hero adventures.  It's the first story that has captured my imagination and illustrates the limitless gifts of the power ring perfectly (except on anything yellow of course!).  I'll recount the bones of the story itself for those of you who haven't been lucky enough to read it but I heartily recommend you track down the reprint in Showcase Presents: Green Lantern vol. 2 and a whole lot more of Hal Jordan's other Silver-Age antics while you are at it! 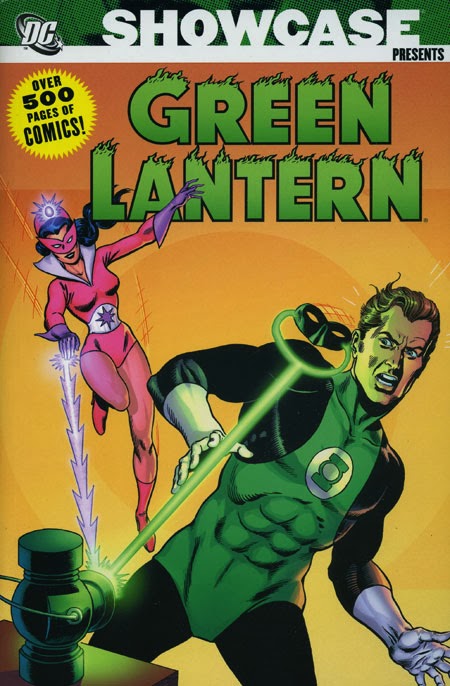 The tale is introduced, as was so often the case back then, with a teaser page showing Hal Jordan in seemingly inescapable peril.  The scene is set and the action fully joined within the opening three panels.  A small mechanical clown pogoes across Carol Ferris’ office and steals the plans to a multi-million dollar fighter jet right out of her hands.  It leaps out of the aircraft boss' window and springs over the head of a hapless Hal Jordan to make its getaway.  Carol and Hal speed after it in a convertible two-door roadster with the Green Lantern having to hide his secret abilities from his feisty companion.  Following an “invisible trail” from his power ring, Hal hurtles through fields, smashing fences that the morally stout Miss Ferris promises to pay for later.  They skid to a halt on the edge of a cliff as their animated quarry throws itself into the waters below.  Then, in a complete reversal of character-type, Carol happily follows Hal’s suggestion to drive back home leaving him stranded alone to “somehow contact the police”.  Keep in mind this was 20 odd years before the invention of the mobile phone. 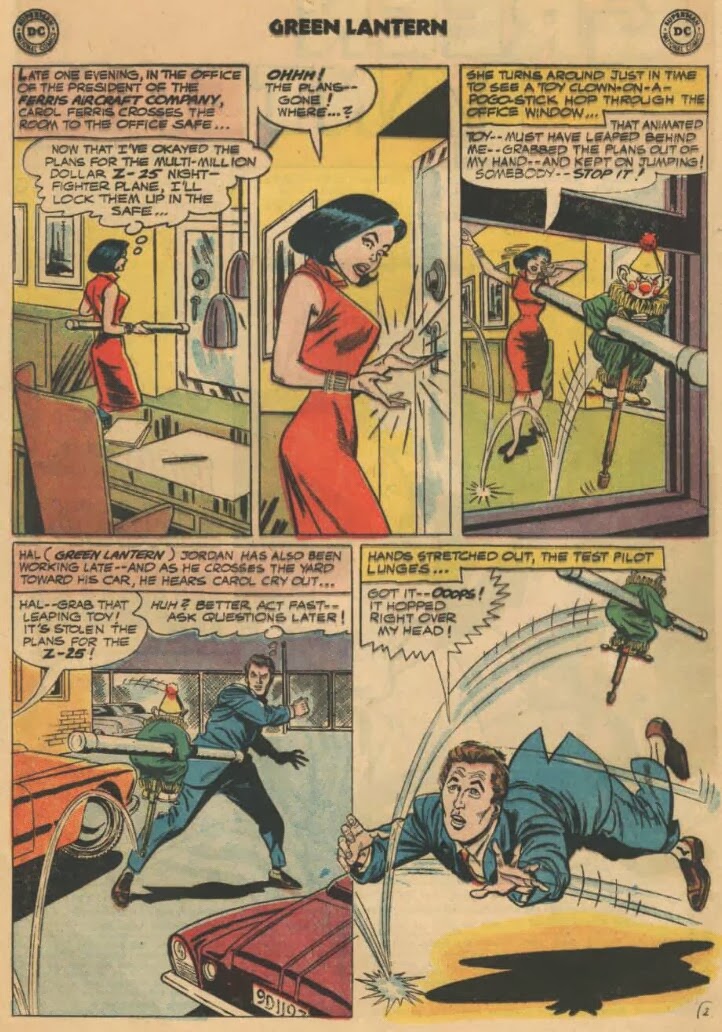 Finally free to change into his Green Lantern costume, Hal flies off in pursuit and trails the bouncing figurine to a house occupied by a crooked toy-making mobster and his henchmen.  In a move that screams of mad professor the toy-maker has filled the room with radiation that only he and his cronies are immune to so as to kill anyone that tries to disturb them.  Hal’s failure to conjure an invisible microphone inside the room leads him deduce that the radiation has a yellow base, his power ring’s one weakness. 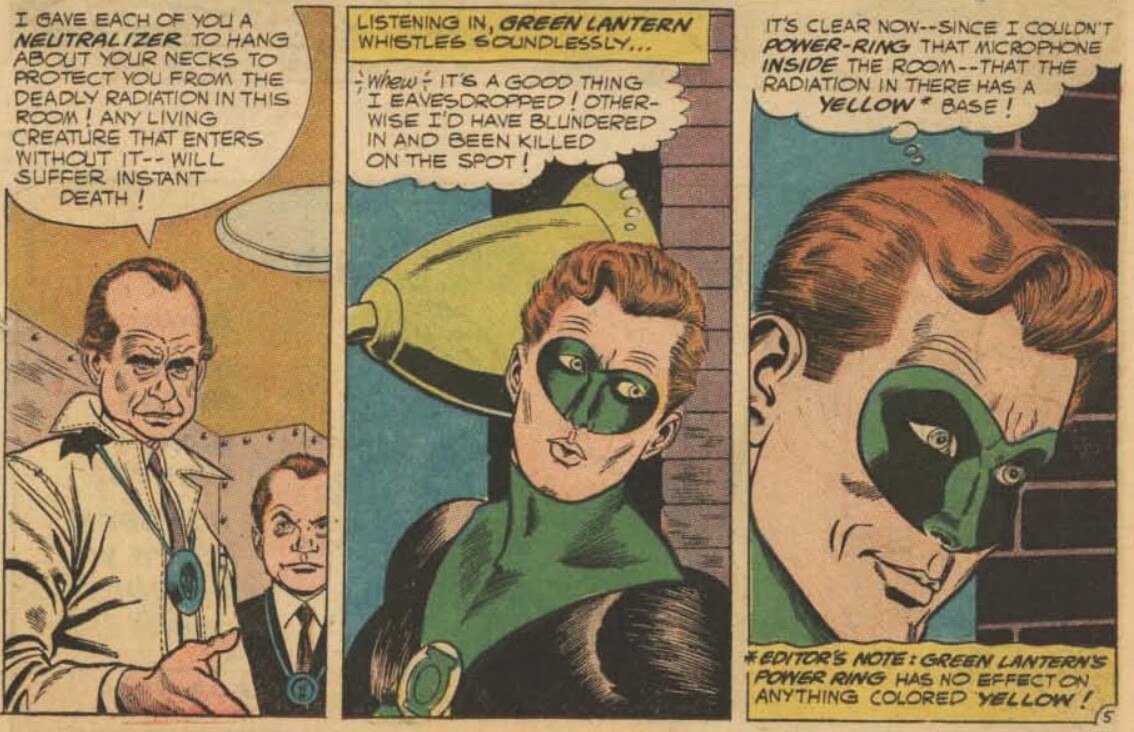 Hal comments that it would be easy enough to wait for the robbers to leave the building and round them up but he is in rather a hurry and comes up with a mysterious plan to storm the place instead.  He smashes through a window and swashbuckles in fine style for three pages seemingly unaffected by the deadly yellow radiation around him.

The big reveal is a joy of science-fiction gold.  Green Lantern punches his opponent so hard in the jaw that his own hand comes off.  It is immediately obvious to everybody that the ring-slinger is actually a robot!  Inspired by his recent pursuit Hal realized that a mechanical man would not have to breathe in poisoned air and used his rings extraordinary powers to transform himself.  I am very willing for a clever modern day creator to prove me wrong and script this into a future GL story but I’m fairly certain that DC New 52 Green Lantern cannot rewrite his or her biological make-up on a whim.  In those fabulous innocent days when realism was not an issue this was entertainment at its finest.  I bet every kid who bought this 12 cent comic wished they had a ring that could turn them into a robot too! 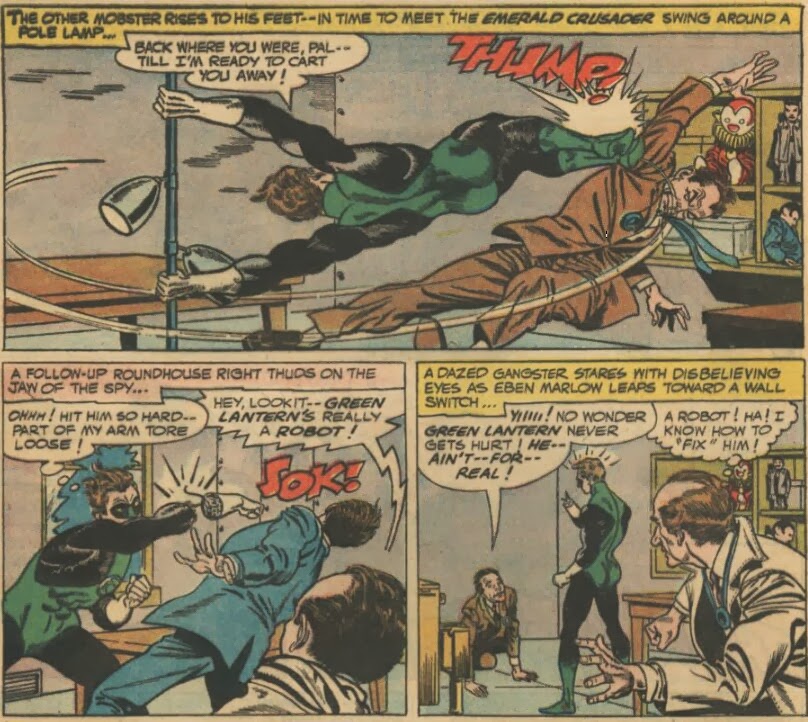 The mobsters realize they are outclassed and flee in their getaway car.  Hal is left with the minor dilemma of elctro-magnetic walls clamping his metal body in place because, you know, every toy-making gangster likes to ensure their radiation room is electro-magnetically protected.  The quick thinking Lanterrn makes short work of the trap and sets off after the villains once more.  Employing the veil of invisibility for the third time in this adventure, Hal creates a solid wall which the unsuspecting crooks plough straight in to. 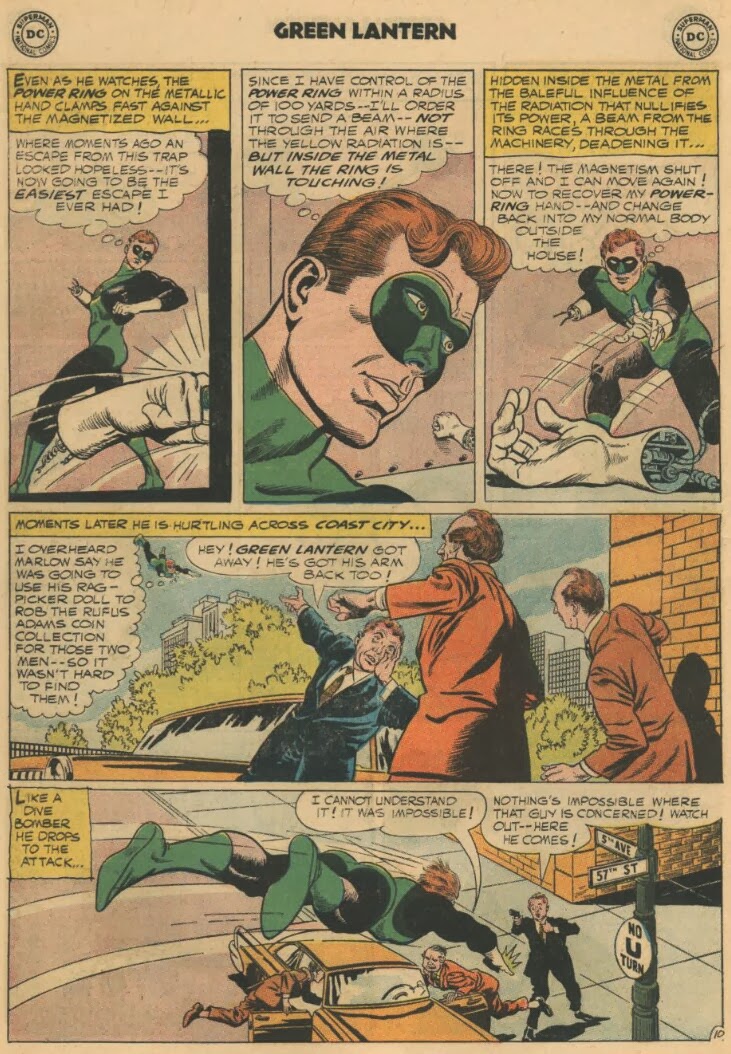 He scoops them up by the scruff of their necks with his trademark giant green hands and deposits them back at their hideout were the police have conveniently cleared out all noxious radiation.  Our hero outsmarts his prisoners by letting loose another robot robber who deposits his stolen booty right at the feet of his criminal creator thus proving the toy-maker was the beneficiary of the toy’s ill-gotten gains. 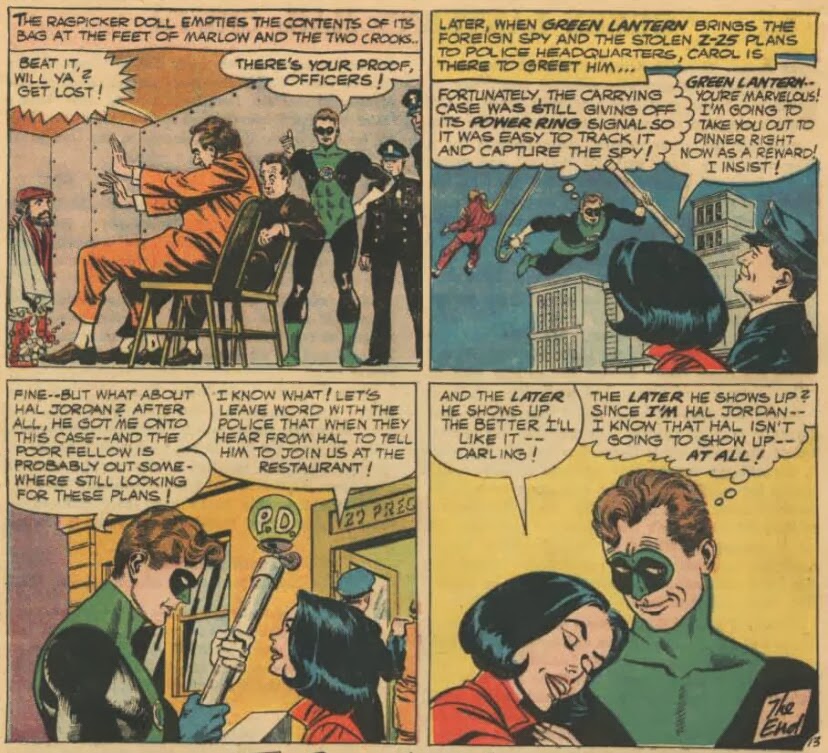 So there you have it. The composition of Silver-Age comics is unlikely to make a resurgence anytime soon, if ever, but it should not be ignored.  Writers had a chance to explore stories as they saw fit without enduring endless scorn from supposed 'fans' or the tedium of editorial continuity that often plagues their modern day successors.  And to my mind that is right and proper.  The "most powerful weapon in the universe" should be without limits and the 'Secret of the Power-Ringed Robot' strikes a balance between adventure and amusement that reminds me why I started reading superhero comics in the first place. Guy Gardner - Corps to the Core

Whatever else you've got to say about Guy Gardner there is no denying that all he's ever wanted to do is be a Green Lantern.  Even back in the bad old post-Crisis days when he tried to kill Hal Jordan it was only because he didn't want any rival to his title as Green Lantern of Earth.  After he was stripped of his GL status he sought out the next best thing, Sinestro's yellow ring, because he could not imagine a life without ring-slinging. 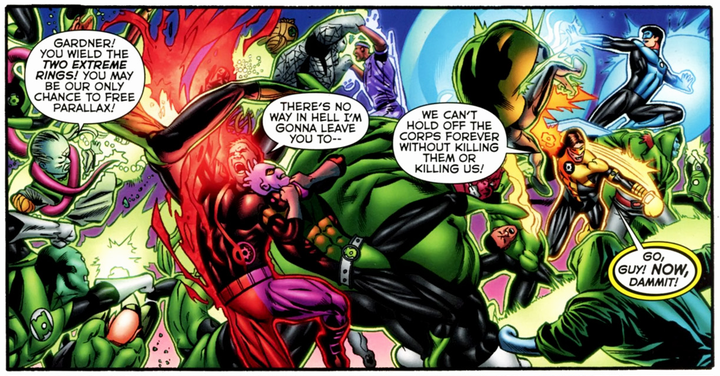 Despite his checkered history and a few too many bumps on the head, Guy has come to epitomise the very best that a GL can be.  He is prepared to roll up his sleeves and get down and dirty for the Corps.  He'll take on the missions that no-one else would consider and get the job done.  He'll defy Guardian edict without a second thought if he holds his actions to be in the best interests of his brothers and sisters-in-arms.  You can be sure he'll be on the front line in every conflict standing shoulder to shoulder with his fellow lanterns.  He'll be the one to provide covering fire while other GLs are getting the hell out of there.

It is ironic then that Guy's greatest moment as Lantern came at a time when he was not even sporting a green ring.  He was in fact wearing two different power rings and neither was green.  During the 'War of the Green Lanterns' when the rogue Guardian Krona restored Parallax, the yellow impurity, to his long-time home in the Central Power Battery on Oa so that he could use the fear entity to corrupt and control the Corps for his own nefarious purpose.  Guy and the Earth GLs had escaped his clutches and, finding their own rings useless in the face of Parallax's  manipulations, had donned rings from the other Corps of the emotional spectrum.  Guy was not particularly happy at having been allotted rings representing opposite ends of the spectrum, red for rage and violet for love. It was only through harnessing the energy of these extreme opposing forces that our heroes could eject Parallax from the battery and restore the Corps' to full cognisance.  To do this Guy has to confront his own fractured psyche but laying bare his innermost feelings, even to himself, does not come easy for a space-cop who thrives on machismo.  The raw emotion leaps from the page as the Green Lantern admits his greatest love and his ultimate rage are inextricably linked  - his love, his life, is the Corps and the idea of that life being denied to him fuels his burning anger.  In that moment Guy does what no other Lantern could.  He smashes through the Power Battery and rips Parallax from its depths. 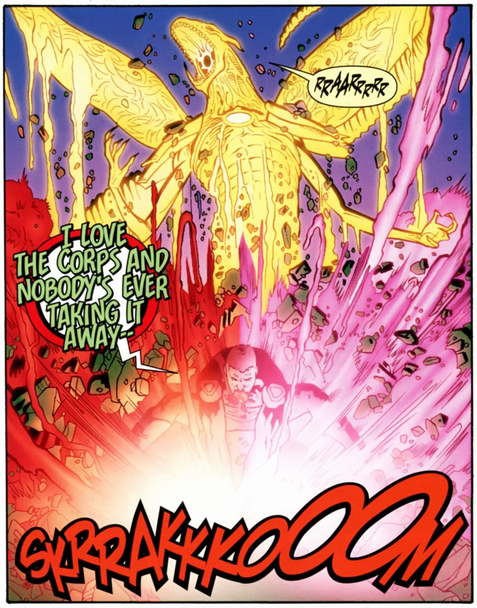 I can read these panels in Emerald Warriors #10 over and over again.  They encapsulate the spirit of everything I hold dear about the Green Lantern series and the mythos it is built on.  They are made all the more poignant now as we find ourselves in DC's New 52 era where Gardner, out of all the Lanterns, has had his backstory most extensively retconned.  In the preboot DCU Guy had lived a tumultuous life  and overcome it all to become an Honor Guard.  He had lived long with the niggling doubt that he was widely considered a second rate lantern, an understudy shrouded in the shadow of Hal Jordan legend.  Having finally earned the unconditional respect of his peers he could not stand to lose it again.  I'm not taking anything away from the character as he is now who has, of course, been through his own trials.  But the Guy who appears here in these pages for virtually the last time is something else altogether - his is an unconquerable force of will forged in the glowing hot embers of life itself.