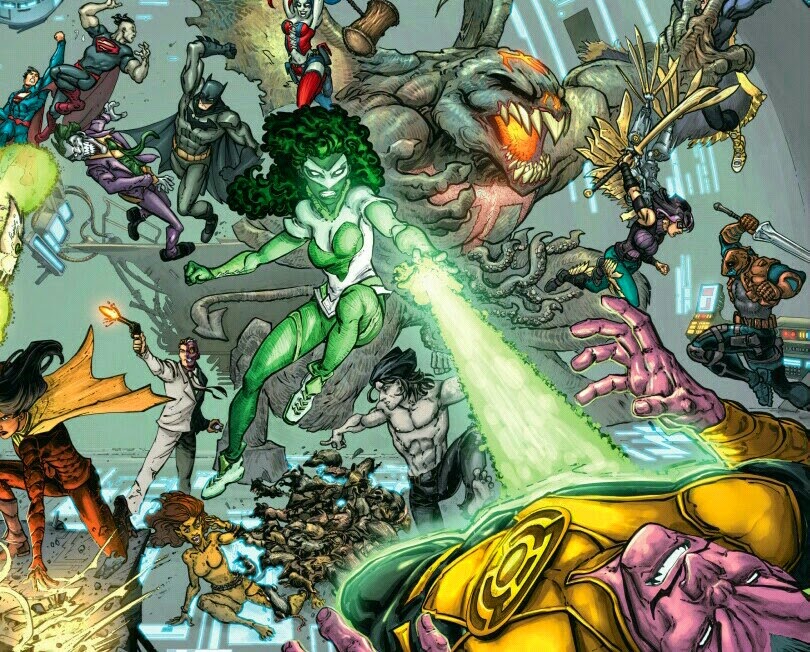 When is a Lantern not a Lantern?

When she’s the inspiration behind a global social resistance movement, of course.

This article is a bit of a first for Flodo’s Page.  It will be the only time in over two years of blogging that I will have featured a DC Comics character that has never appeared in any Green Lantern title.  Ever.

Let me go back to the beginning.  The Movement slipped under my radar when it was released.  It was marketed along with Green Team, a book that I was disappointed to discover had nothing to do with either Green Lantern or Green Arrow.  With that my interest in either title was tossed to the wayside.  It was only with the growing critical acclaim on Twitter (particularly from one Mr. @Fotocub) and with the intoxicating enthusiasm of the Raging Bullets podcast that I started to wonder if I had missed out on something.  Curiosity led me to flip through an issue about half way through the run.  My attention was immediately taken by a masked character who seemed to glow a certain shade of green at one moment and an oddly familiar yellow the next.  Was this some kind of White Lantern? 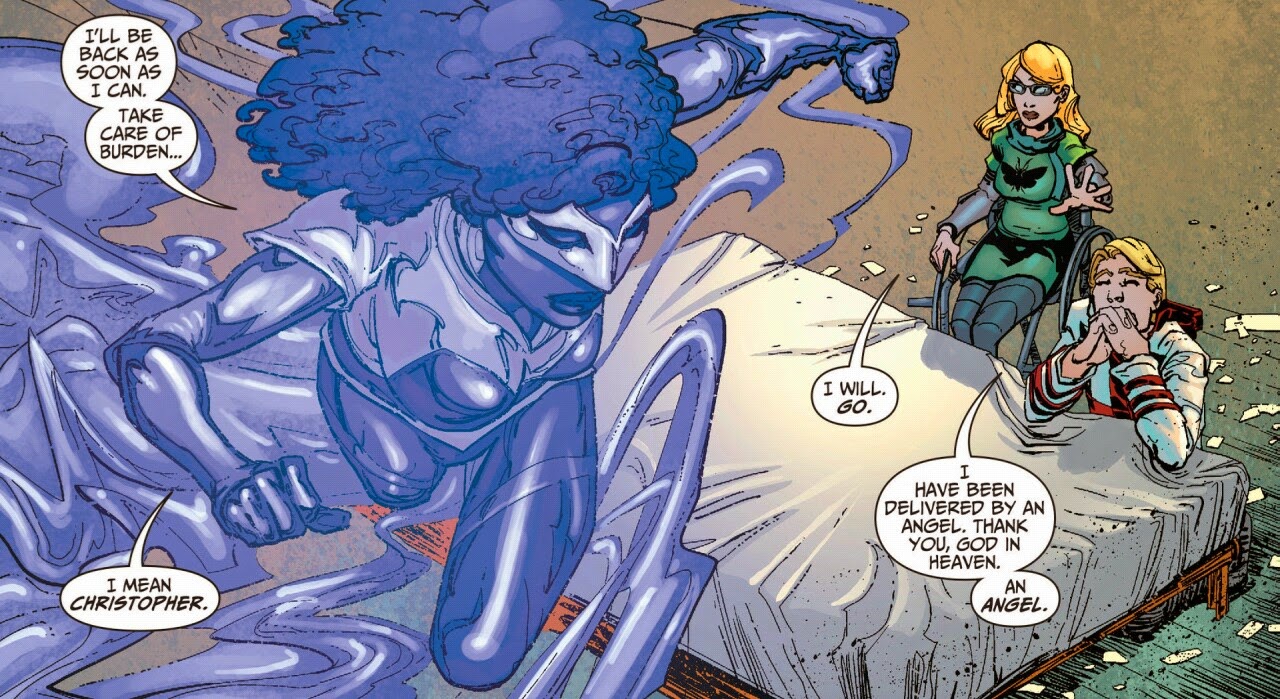 I had just been introduced to the remarkable Virtue.

Virtue is the leader of The Movement, known to the public as Channel M.  At the group’s core is a small band of metapowered young people who come together to protect and be a voice for the disenfranchised.  In creating the character Gail Simone has managed to develop the most original spin on the Emotional Spectrum since Geoff Johns wrote Blackest Night.  And I realise that is no small claim on my part. 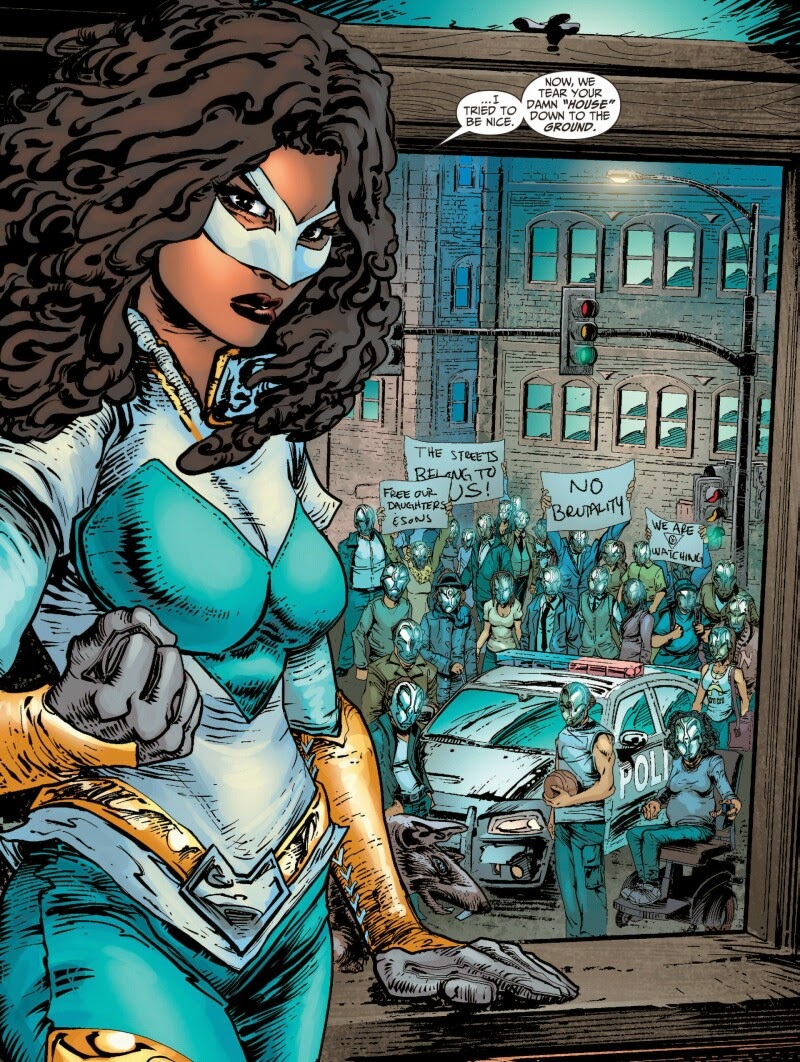 The girl’s superpower is described as “riding emotions”.  Twelve issues is shamefully short for a title as high in calibre as The Movement and not nearly enough to give Virtue’s origins and abilities the attention they deserve.  As a result there is much that is still unclear.  What we do know is that her gift is handed down through the woman in her family from one generation to the next.  She can detect emotions in others and harness them.  Her body is transformed into an essence powered by the people she reads.   In her spirit form Virtue can fly and we’ve witnessed her trail waves of emotion like a bloodhound on the scent.  She has changed her size, growing huge on fuel of red fury.

She can also take control of the feelings she encounters.  She was able to siphon the fear of being buried alive from her friend Vengence Moth and transfer it into a would be attacker, leaving the villain paralysed by terror. 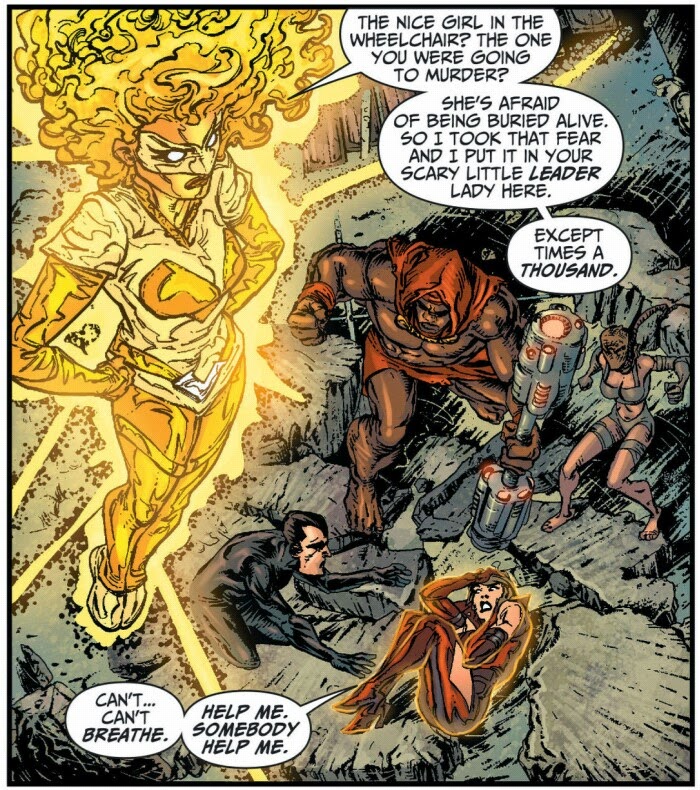 The girl, known as Holly to her friends, does not have to rely soley on her special abilities either.  She is very apt at administering a swift running shoe to the jaw too when the occassion demands it, and leads her team from the front in a conflict.  Mind you, you can't solve every problem with a superpowered light show or a round of fisticuffs.  Virtue shows true leadership quality in her understanding of what can be achieved through dialogue.  Her favourite venue for peace negotiations is the milk and doughnut store! 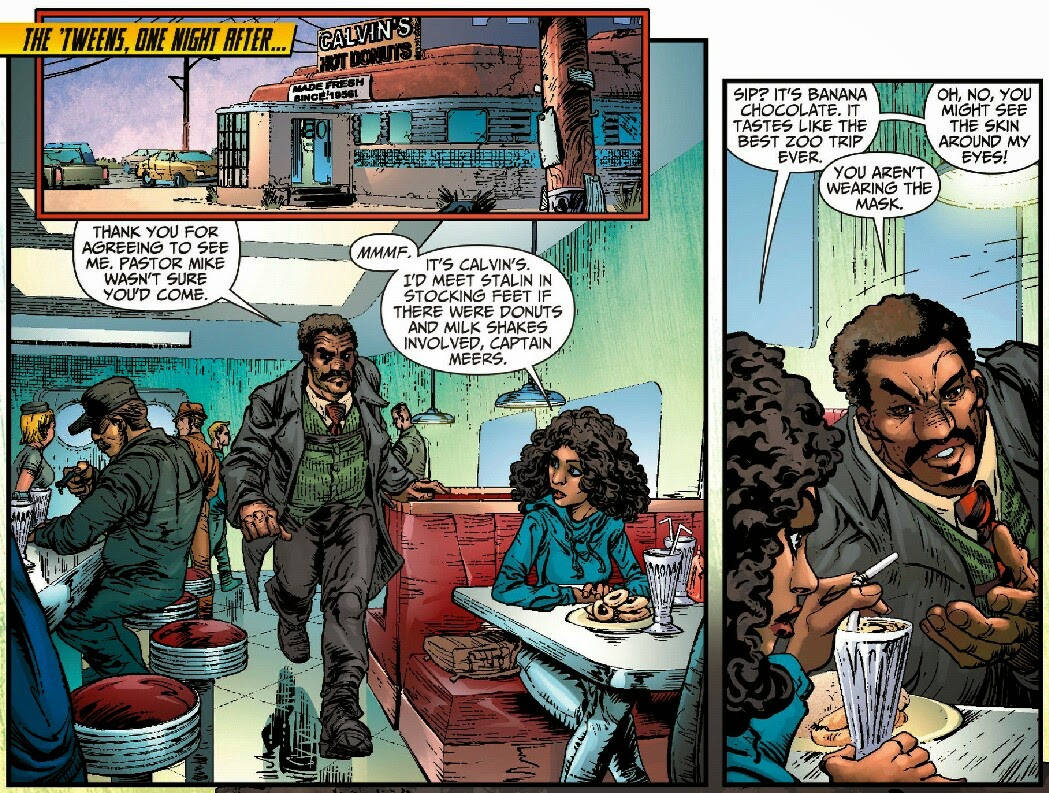 I get the impression that Simone is very fond of her creation.  The character is representative of a number of minority or maligned sections of society but she is not written as a token gesture to any of them.   She stands up proudly for those who will not or cannot stand up for themselves.  In issue #12 Simone takes time out from having to wrap up a story that could have happily gone on for many more months to share some of Virtue’s history with us.  The character’s motivations are integral to the whole premise of this book and it is only fitting that we get to learn some of what shaped her into becoming a heroine for the folks who live on the wrong side of the tracks.  In her own young life she overcame traumas that no child should have to face and betrayals that no child could understand.  Much of this was a dubious consequence of her “gift”.

But against all this, it is also her gift that allowed her to move on.  It empowered her to help those around her.  Emotions are laid bare to Virtue and because of this she can see the smallest spark of love or hope in anybody, even in the worst that humanity has to offer.  While the likes of Superman profess to believe there is good in everyone, Virtue can actually see it.  With this ability as a constant presence in her life how could she not make a stand for the people who are looked down on by society for who they are or the circumstances they have come from?  This, dare I say, is the true virtue of the character, not the fact that she can shoot beams of concentrated energy from her fingertips. 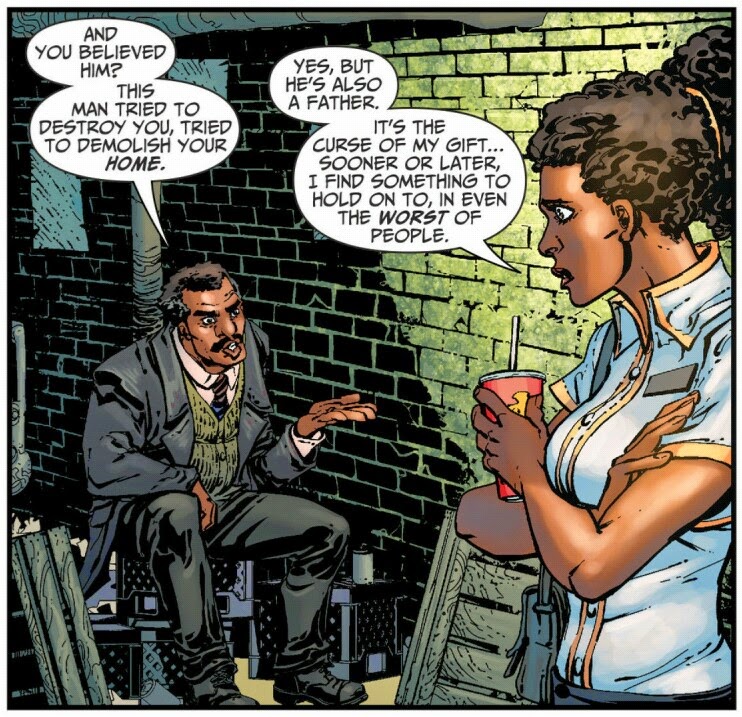 The image at the top of this post of Virtue unleashing Green willpower on a hapless Sinestro is a little deceptive.  In her private moments she dreams of The Movement being accepted by the superhero community and standing shoulder to shoulder in battle alongside the Justice League.  They would quite literally come out of the shadows and into the light.  Her team protect "The Tweens", an area of the city that has been abandoned by the police and it's monied population.  The series ends on a high note when a detective she befriended observes that they will never change enough to fit in with the "justice people".  "Oh, I know...” Virtue replies, "but sooner or later, Captain, THEY are going to have to change to fit in with US."

And I for one hope they do.  It would be a travesty if we do not get to see more from The Movement in the DC Universe.  I want to read another volume of the self-named title and I also want to see the characters popping up in other books.  I am already writing Virtue’s first meeting with Earth’s Green Lanterns in my head.  Each would take to her a little differently and none of them would walk away from the meeting looking at the world exactly as they had before.  In the unlikely event that somebody from DC happens to read this blog I cannot make myself any clearer - Virtue’s debut appearance in a Green Lantern comic has got to happen.  The sooner the better too. The Movement Vol. 1 is available on Comixology and at your local comic book store. 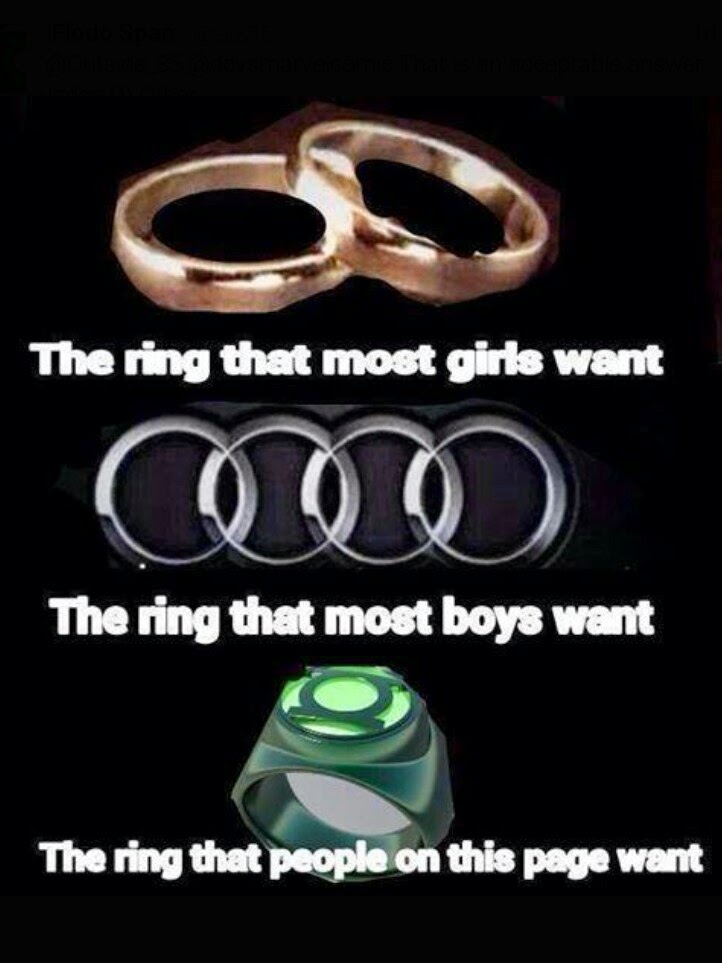 I found this one doing the rounds on Twitter.  I've no idea who to attribute it to but it made me laugh out loud for real so I had to share!

I first came across it on @DCvsMarvelComic.
Give him a follow if you like a geeky giggle.