The Villainous Villainies of the Lamplighter *


In conjunction with Flodo's Page. 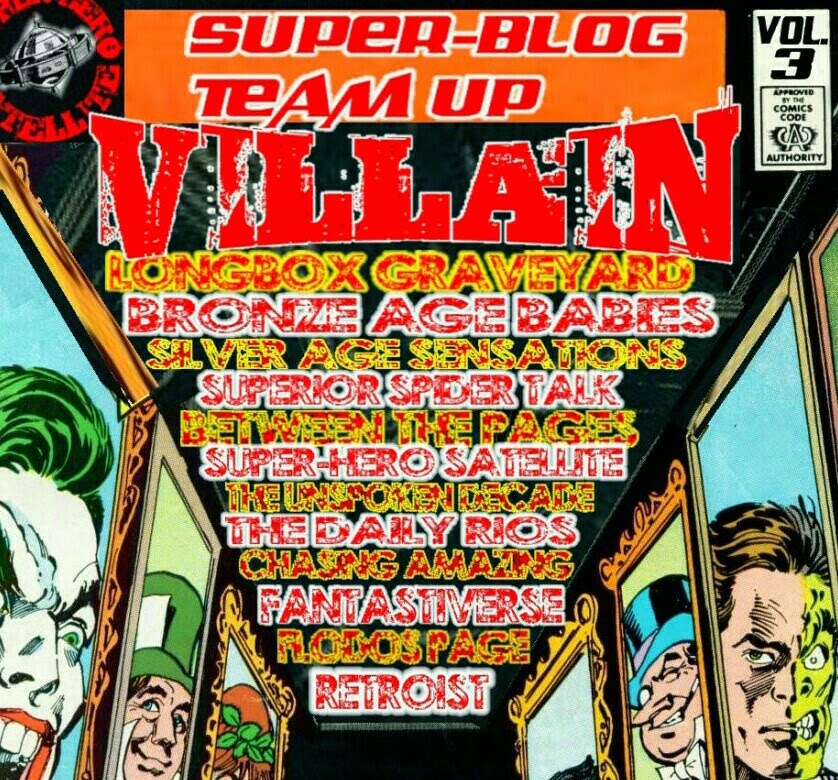 The year is 1968.  The popular comic book Green Lantern is about to hit its landmark 60th issue.  The creative team of Gardner Fox, Gil Kane and Sid Greene lock themselves in a room together to brainstorm ideas.  Clouds of grey smoke fill the air. 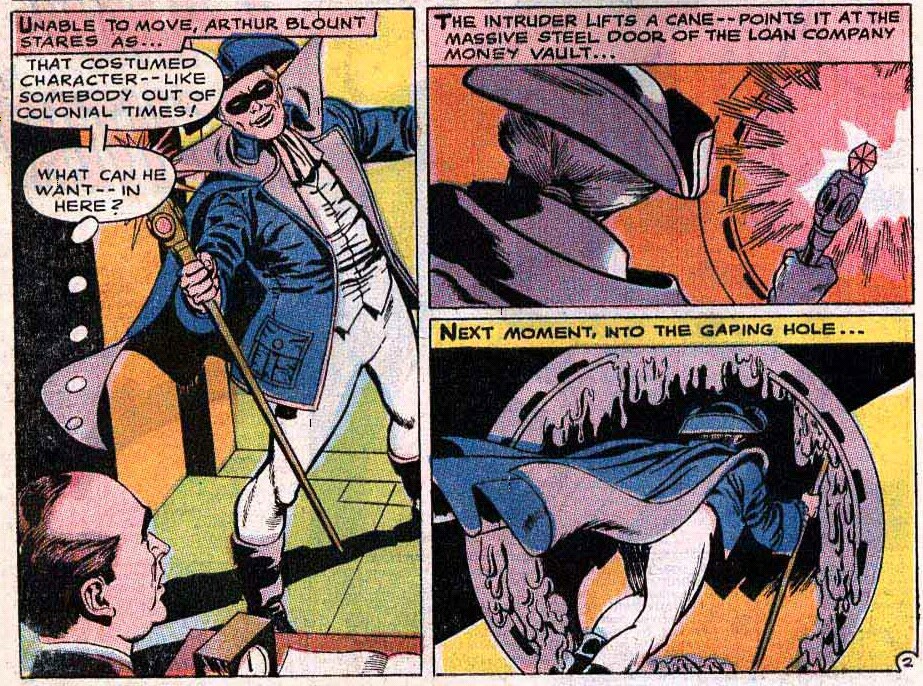 SG:  A stick?  Why’s he gotta put it on a stick?
GF:  You know.  ‘Cos he needs a stick.
SG:  He does?
GF:  Because, you know, because he’s BLIND!
GK:  Hold on.  He’s a super-villain but he’s blind?
GF:  Well yeah.  Why not?  He’s got a magic lantern.
SG:  Lamp!
GF:  Maybe he can only see when he’s got the lamp turned on.
GK:  So what else does this lamp do then?
GF:  Anything.  Green Lantern can do anything with his powers.  So this guy can do even more than anything.
GK:  Works for me.
GF:  So how do you think he got his powers then?  Him and this lamp?
GK:  How about a nuclear explosion?  No-one is ever going to expect that. 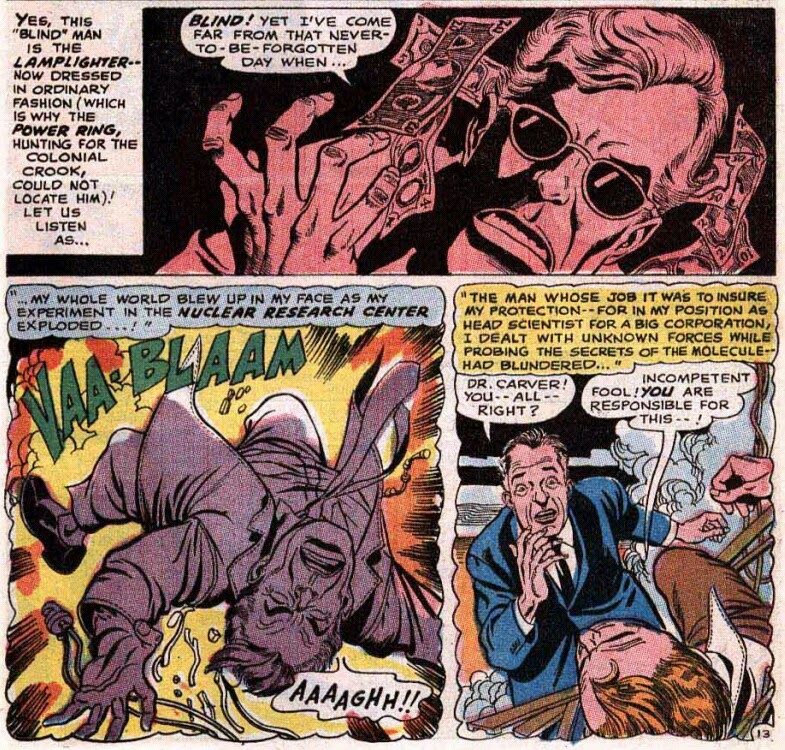 SG:  Yes.  He’s a mad scientist and his experiment went wrong and it blew up in his face.
GF:  Oh, that’s good.  That must be how he went blind too.
SG:  And he had a giant machine that could turn anything in to anything and he was making gold and diamonds and stuff, and the whole thing just blew up.
GK:  So why didn’t the lantern blow up in the explosion?
SG:  Oh yeah.  Didn’t think of that.  Maybe the lantern… lamp… didn’t get its powers until after the explosion.
GF:  Maybe he was still doing his experiments but he couldn’t see and he spilled a load of chemicals all over himself and made a special kind of light only he could see in.
GK:  So he spilled them on the lamp too..?
GF:  Too farfetched?
GK:  I don’t know.  Maybe.
GF:  So maybe he didn’t spill them on the lamp.  Maybe he PAINTED the chemicals on the lamp after.
SG:  Genius! 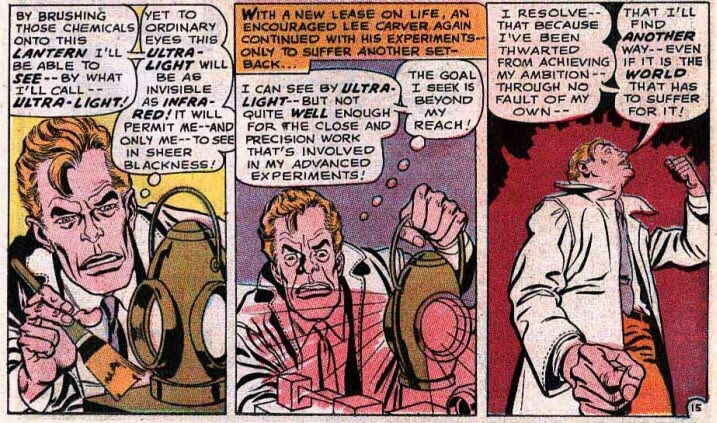 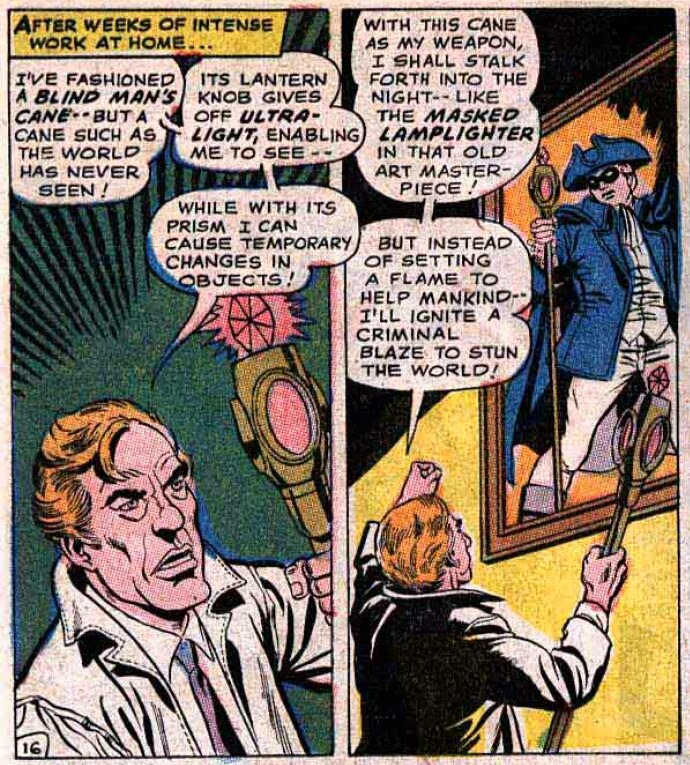 Just then Julius Schwartz puts his head around the door.

Julius Schwartz leaves, closing the door behind him.

GK:  So.  Are we going to do all that stuff?  The little guy stuff?
GF:  It’ll be fine.  We’ll stick it in the first caption where Julie will see it and then we’ll catch it all up on the last page.  He’ll never know the difference. 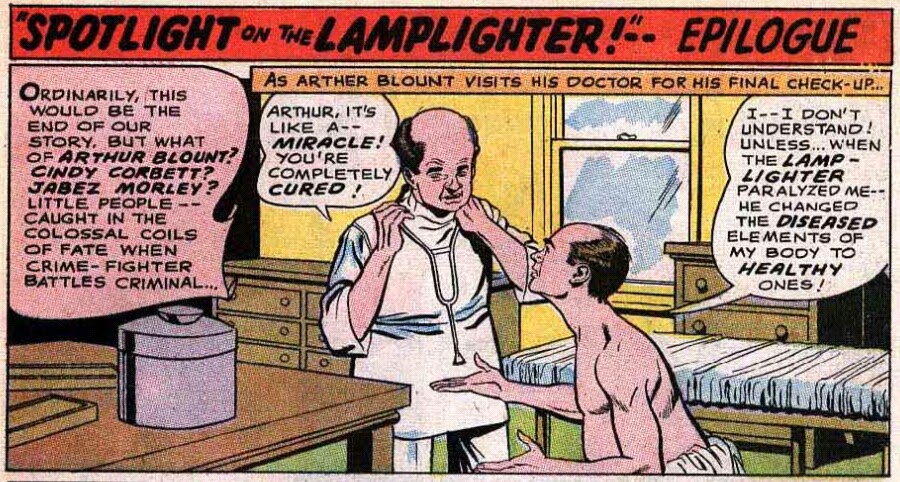 SG:  But we’re going to have a big fight, right?
GF:  Of course.  It’s Green Lantern.  We’ve gotta have a big fight.
GK:  The biggest.  And maybe because this guy has a lamp Green Lantern can toss another lamp at him too, a big one.  And say something funny.
SG:  Funny?
GF:  Something like… ya know, “So be my guest… and have a taste of a modern kind of lamp!”  Something like that.
SG:  That should do it.
GK:  And the bad guy,  he takes this big green lamp and turns it into a big red buzz saw and tosses it right back at ‘Lantern. 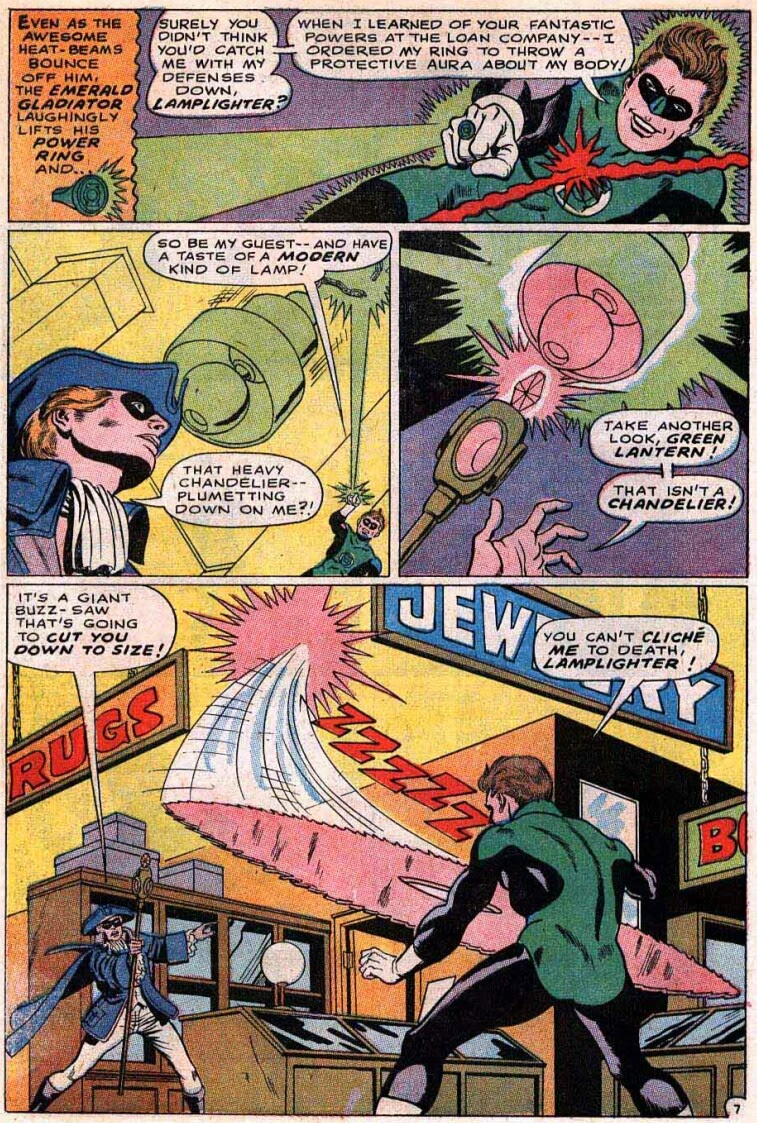 GF:  And then Green Lantern makes a huge, huge lamp, but this time it’s really a lampshade, and it’s got like a dozen of himself on it and the lamp guy can’t tell which ones the real Green Lantern.
GK:  That could work.
SG:  So if this guy can do anything…
GF:  More than anything!
SG:  More than anything.  Why doesn’t he just smash the ring?  The power ring?
GF:  Maybe Green Lantern turned it invisible.
GK:  But wouldn’t our guy see that he had no ring on and was still flying around.  He might guess the ring was invisible.
GF:  Maybe ‘Lantern made a fake ring.
GK:  A fake ring?
GF:  Sure.  He made the ring invisible and then he switched hands and made a fake ring for lamp guy to smash.
SG:  Guys, guys.  Hold up.  We’ve got a problem.
GK:  Problem?
SG:  We haven’t done the yellow thing.
GK:  Oh yeah.  We haven’t done the yellow thing.
GF:  Oh, that’s easy.  I’ve always got a yellow thing.  Get this.  The guy… lamp guy.  He loves gold, right?  So he turns Green Lantern into yellow gold. 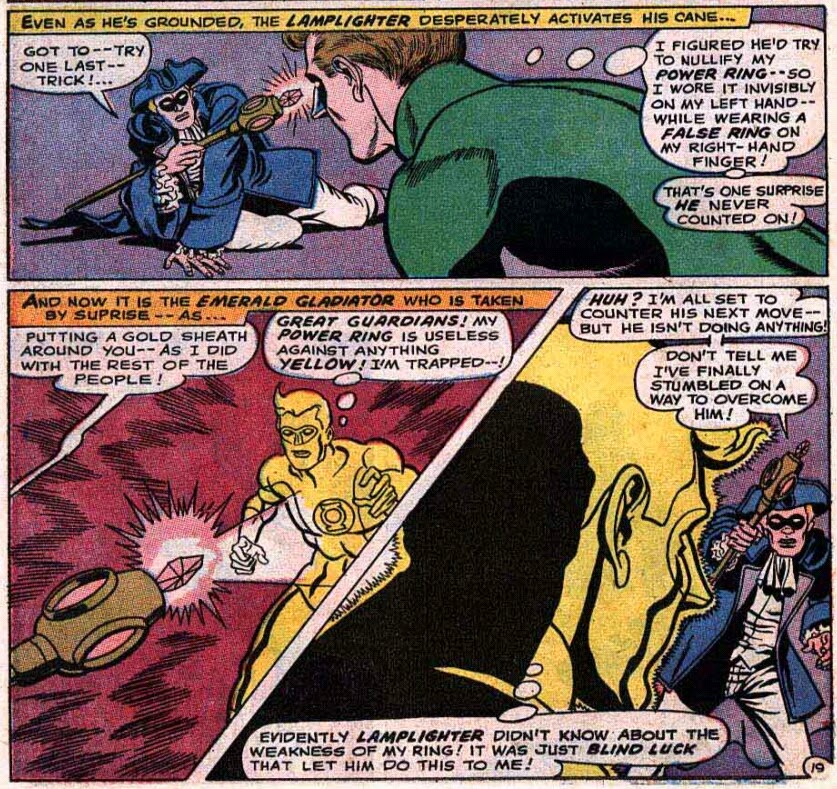 SG:  I like it.  So how does he get out of that one then?
GK:  Maybe he’s not really gold.  Just inside the gold.  Like, encased in gold.
GF:  Yeah.  And he shrinks down to the size of a molecule and escapes.
SG:  A molecule? That’s small.
GK:  We’re going to need a name.  Ya gotta have a villain name before ya can go about robbing and committing villainous villainies.
GF:  Sure.  What about Lamp Guy?  No.  Lamp Man?
SG:  Light Man?
GK:  Stick-lamp?  Lamp-stick?
SG:  Red Lamp?
GK:  I got it, I got it.  The guy in the picture he sees, the one he copies.  He can be this old three corner hat wearing lamplighter that goes around in a mask lighting old lamps.  Guy calls himself Lamplighter.  Well, what d’ya think?
GF:  Sure.
SG:  Works for me.
GK:  So how does Green Lantern beat this guy anyway?  How does he beat this guy who can see in a magic light and turn anything into anything?
SG:  How does he beat this guy?
GF:  Hmm… Wait.  I know how he beats him!
GK:  You do?
GF:  Sure.  Green Lantern, he can take his stick right off him and he can punch him in the face!
GK:  Punch him in the face!
SG:  Ha!  Punch him in the face!
GF:  Punch him in the face..! 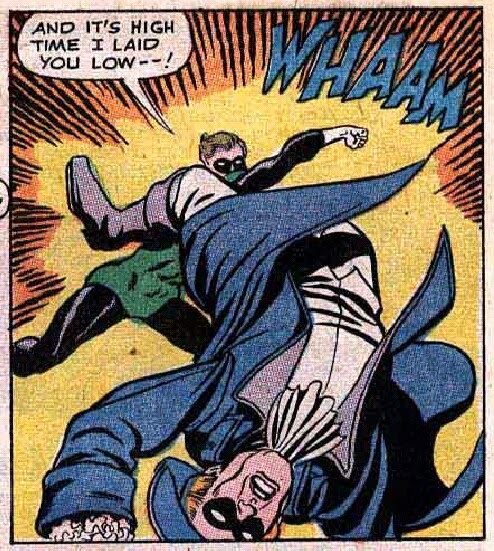 The year is 1992.  The popular comic book Green Lantern Corps Quarterly #3  is about to go to print.  The creative team of Jeff Bailey, Marty Golia, Joe James, Barbra Kaalberg, Albert DeGuzman and Anthony Tollin lock themselves in a room together to brainstorm ideas.  Clouds of blue smoke fill the air.

JB:  Dudes… come on.  Wake up.  We gotta do this.  Jones and Stern and Friedman and all those guys have already handed their pages in.  Boss says they're ready to go to print.
MG:  Alright, alright.
JJ:  Man.
MG:  What have we got then?
JB:  We got nothing.  Except G’nort.
ADG:  What?
BK:  G’nort?
JB:  Dooley sez if we want to go effin’ around all day we can eff around with G’nort.
MG:  Aww man! 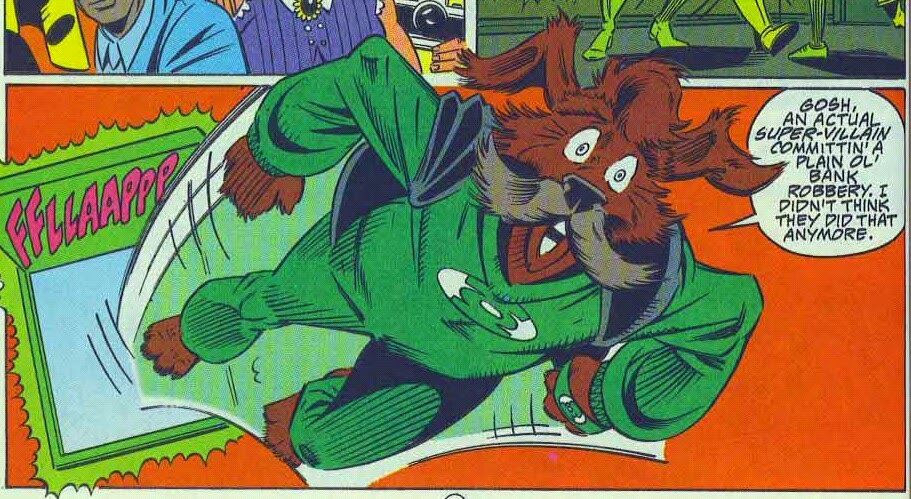 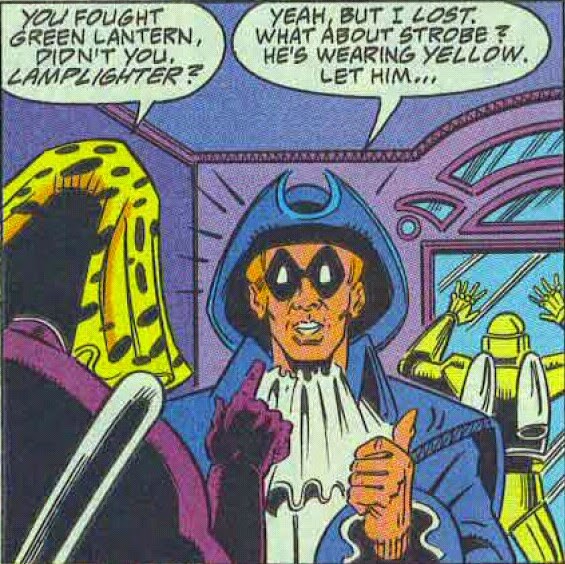 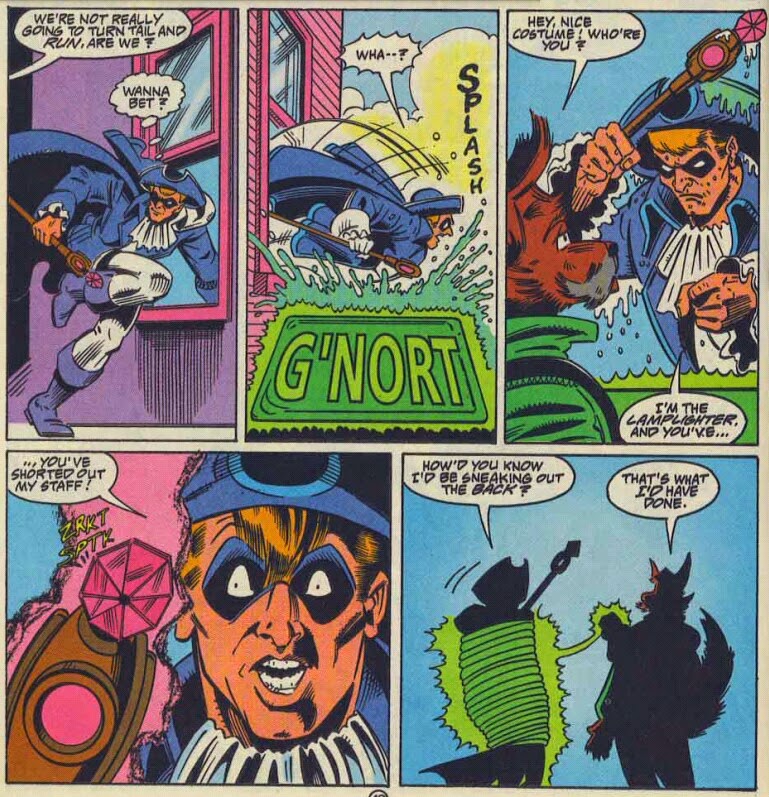 * The super-villain named Lamplighter was created in 1968 by the legendary team of Gardner Fox and Gil Kane, along with the very talented inker Sid Greene.  Despite displaying momentous power and battling Green Lantern Hal Jordan to a standstill in Green Lantern #60,  the character was not seen again in comics until a compilation of short tales collected under the banner of Green Lantern Corps Quarterly #3 was published in 1992.  What may have befallen the ambitious Lamplighter in the intervening years is not recorded and the loss to storytelling is sadly ours.

This was a production for Super-Blog Team-Up in conjunction with Flodo's Page.  A feast for your grey matter still awaits you with some of greatest geekery ever written courtesy of the gracious folks at
Super-Blog Team-Up.

So what you are waiting for?  Get clicking on the links below and give your inner villain a visit because, sometimes, it's good to be the bad guy!