Construct of the Week #32 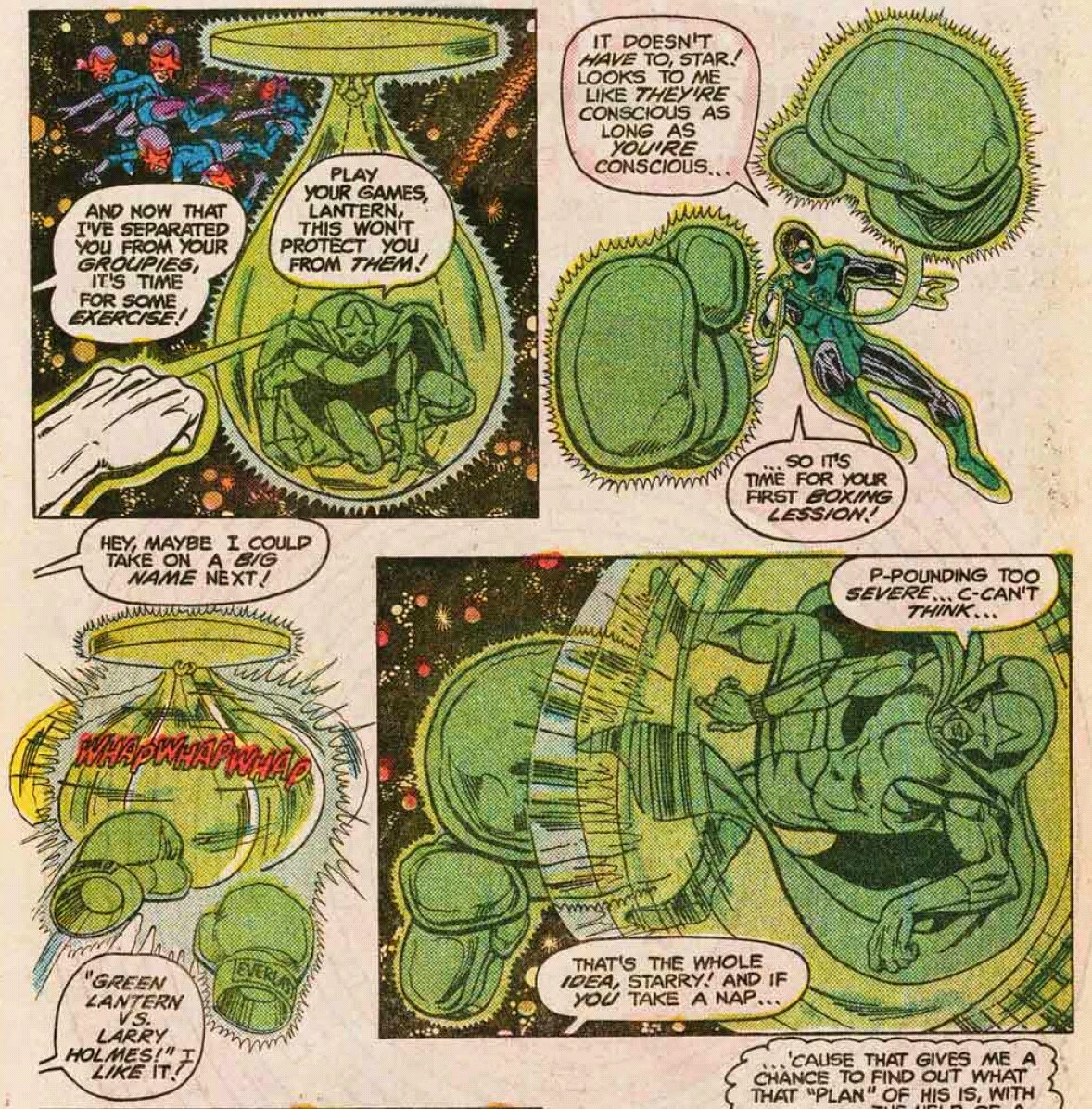 It Ain't Easy Being On The Green Team 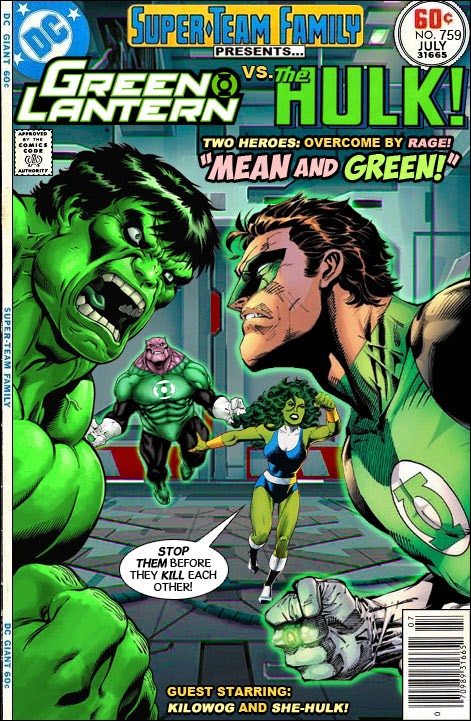 What will happen when the most powerful weapon in the universe goes up against the strongest one there is?!  I'm not too sure myself but I do know it won't pretty and I know we are in for one heck of a show!  As the frog said, "It ain't easy being green".  Find out how it all goes down when the Green Goliath meets the Green Gladiator in the Super-Team Family crossover to end all crossovers... Green Lantern vs. The Hulk!!!

Unfortunately this little beauty has never seen the printed page and probably never will because the striking cover above is the brainchild of the very talented artist and comic fan, Ross Pearsall.   Ross publishes a blog called Super-Team Family ...The Lost Issues where he takes that well-known collision of Photoshop and geek culture to a whole new level.  To put it bluntly, the man has "mad skills". 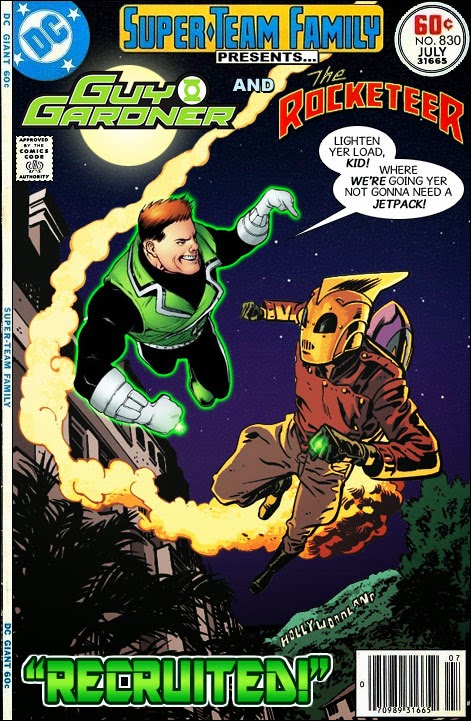 Originally inspired by superhero team-ups in DC Comics' The Brave And The Bold and in Marvel Two-In-One, Ross's unbridled imagination brings together some of the greatest and most unlikely pairings in comic books and beyond, the likes of which you have never seen before.  Literally.  For, as the name suggests, these are The Lost Issues.  The team-ups that could have been, or should have been, or in some cases definitely SHOULDN'T have been.  Ross creates covers for stories that the fans want to see but for reasons, legal or otherwise, have never happened in the real world of comics publishing. 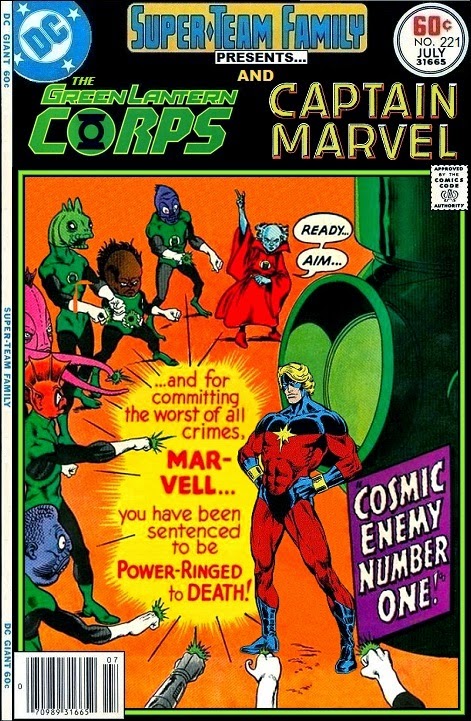 You're damn right I want to see Hal Jordan go up against The Hulk!  And I've never wanted anything more than I want to know what happened when Guy 'my way or the highway' Gardner met Cliff 'I make this rocket look good' Secord.  The cosmic battle between the Kree's Captain Mar-vell and the Green Lantern Corps is a story that could make a whole event in itself.

I've picked out some of my favourite Green Lantern covers from the Super-Team Family collection for this feature but you really owe it to yourself to take a look at the blog in it's entirety.  Ross has been creating these mash-up covers since 2011 and has been publishing a new image every single day for the last two years!  There are literally thousands of covers to peruse and there is something to catch the eye of fans of all types.  Comic books, sci-fi and fantasy, cartoons, even TV and box-office films all get the magic Lost Issues treatment. 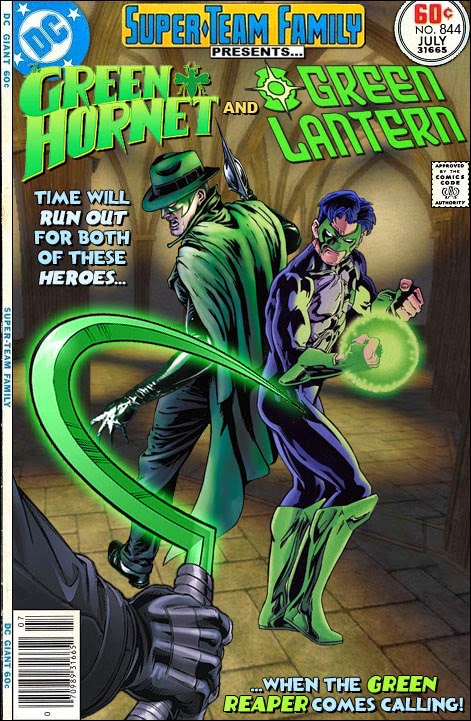 While the Super-Team Family covers are often hilarious (anyone up for Ch'p and Squirrel Girl?) and undoubtedly cool beyond measure (you know you want to see Silver Surfer vs. Darth Vader!), they are also something of an education in the history of comic book art.  Wherever possible Ross has listed the names of the artists he has taken images from or worked in the style of.  The blog's labelling function groups posts both by character and also, less obviously, by artist.  So if your thing is Frank Miller and you always wanted to know what Robin looks like on a Daredevil cover your dreams are only a click away.  Personally, I can thoroughly recommend an examination of the many wonderful homages to Neal Adams if you have 20 minutes or so to spare! 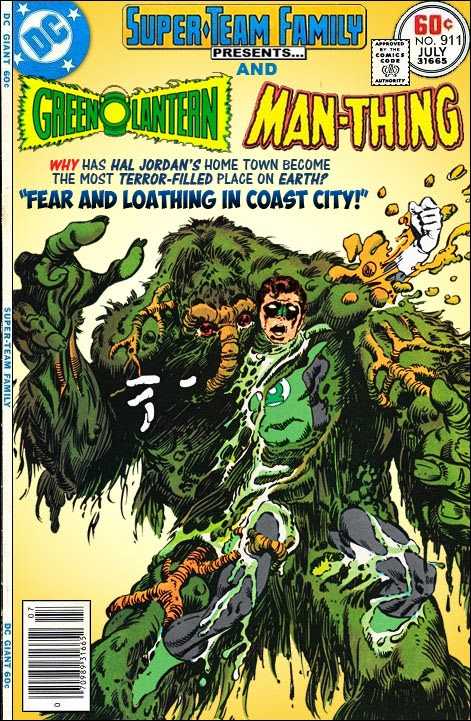 You can check out the whole collection at the  Super-Team Family ...The Lost Issues blog, or follow Ross Pearsall on Twitter, @RossPearsall.  If you are interested in hearing Ross talk about how the blog came about or where he gets his inspiration from to keep coming up with fresh superhero team-ups day after day you can listen to his live interview on the Blog Talk Radio programme, Clobberin' Time.


Mark Twain famously said, “There is no such thing as a new idea. It is impossible. We simply take a lot of old ideas and put them into a sort of mental kaleidoscope. We give them a turn and they make new and curious combinations."

Impossible or not, I think I am on fairly safe ground to conjecture that the majority of ideas are routinely revisited in the world of comics.  Whether it is the retelling of an origin story, the resurrection of a formerly dead character, or the passing of said character's legacy on to the next generation, we all love to see elements from our favourite stories invoked in new material.  As I understand it both DC Comics and Marvel intend to take this approach to the extreme in 2015, overtly referencing a whole of host previously published storyarcs as the basis of each of their latest company-wide events.

At the other end of the scale to this are the little tricks and eye-catching gimmicks that innocently resurface every so often as comic book writers attempt to tap into the timeless essence of their chosen muse.  I stumbled across one such oddity not long ago while I was researching the earliest appearances of the Justice League of America.

Have a look at the delightful panel below from Justice League of America #3, vol.1 (1961) showing Hal Jordan think quickly to save the city from certain disaster.  He creates giant humanoid constructs with his power ring to prevent damaged sky-scrapers from falling and crushing the population below.

We can all agree this is a fantastic bit of ring-slinging from Hal which must have been very exciting for fans to read back in the early sixties.

Jump forward then exactly 50 years into the future and take a gander at this next wonderful double page spread which graced the pages of Green Lantern: New Guardians #1 (2011).
﻿ 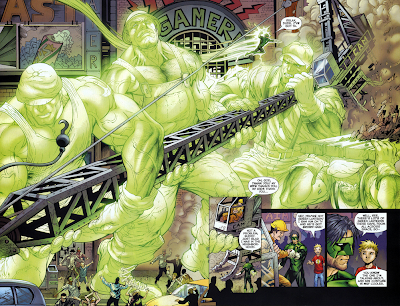 Note the collapsing building and falling crane destined to annihilate the terrified city dwellers below.  Note our green-clad hero swooping down from the sky to mount a daring rescue, and most importantly, note the big, green giants stretching their huge arms around the plummeting debris to halt its catastrophic descent.

It's the same concept in both panels!  Yes, the 2011 version has been considerably fleshed out and updated to entertain a more demanding 21st century audience (3 years on and I am still struck by the beauty and energy of the artwork) but when you boil right down to it, it is the same idea appearing in both comic books.

I have no clue if the New Guardians creative team of Tony Bedard and Tyler Kirkham gave any thought to their historic Justice League predecessors, Gardner Fox and Mike Secowsky.  I sincerely doubt it.  But I like to think the idea first popped into heads of those silver-age creators back in 1961 and floated around in the ether for a good many years until it passed through Mark Twain's mental kaleidoscope to be turned and transformed into a new and very curious combination.