Construct of the Week #10 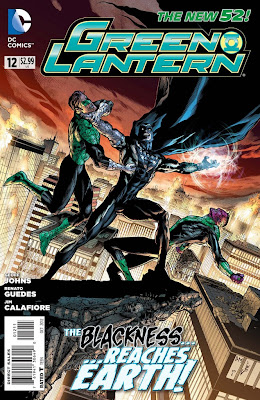   It doesn’t take a genius to know that something big is about to explode across the Green Lantern universe.  The comic press has been full of titbits exposing earth’s new Green Lantern and the Rise of the Third Army for weeks.   But even if you have had your head buried in the sand or you’ve turned your back on the mighty god that is internet, the creators behind the Green Lantern titles have been waving a pretty hefty signpost in the comic books themselves.


I decided not to do individual reviews for Green Lantern #12, Green Lantern Corps #12 or Green Lantern: New Guardians #12.  Not because they weren’t of sufficient quality to warrant personal attention – they absolutely were.  But more importantly, what we have seen in all three titles (and to a lesser extent in the runt of the litter, Red Lanterns #12) is a carefully orchestrated coming together of themes and ideas in readiness for the Green Lantern crossover event touted for October.  All roads lead to the Third Army.


As ever, it is the Guardians of the Universe who are to be found at the core of all things GL.  As the founders and legislators of the Corps they have been central to a huge number of lantern stories since the early 1960s.  Immortal beings who had set themselves up as the protectors of life everywhere.  Their actions have often appeared questionable but, baring the work of a few renegades, they have always been more or less just. Enigmatic and manipulative, for sure, but with the noblest of intentions.  The Guardians appear only fairly briefly in all three GL titles this month and yet in a few panels they steal the show over and over again. 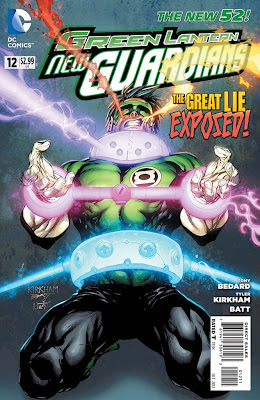 In Green Lantern: New Guardians #12 Kyle wraps up a storyline that has been 12 months in the telling.  He defeats an extremely power enemy in Invictus and does not even get 30 seconds to revel in victory before his entire world is undone with the revelation that the Guardian Sayd had murdered their fellow Corps members in order to bring the New Guardians together.  A response to her brethren lobotomizing the Guardian Ganthet in the first step of whatever dastardly future is about to be unleashed on us.


And in Green Lantern Corps #12 another arc is wrapped as the Alpha Lanterns are literally obliterated out of existence.  John and Guy’s victory is at best bittersweet.   As with Ganthet, the Alpha’s fate was sealed at the machinations of the Guardians.  They appear to have taken another powerful player off the board to avoid any possible contest of their plans.  The final splash page of the book shows a suitably melodramatic and somewhat chilling Ganthet confirm our suspicions that no character’s future is safe in the months ahead. 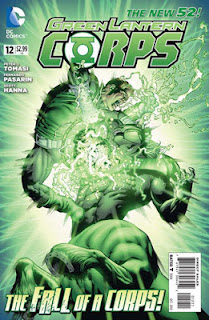 Green Lantern #12 is not quite the final issue of the current Black Hand narrative.  That comes later this week in Green Lantern Annual #1.  The book has a very final feel to it nevertheless.  Hal Jordan takes down Black Hand briefly by frying his synapses and, together with Sinestro, he defeats a zombie hoard several hundred strong.  Sinestro sacrifices his final tie to his old life when he uses his yellow lantern as a light bomb against the undead mob.  It is here in the main Green Lantern title that the Guardians are most explicit.  At the whim of Geoff Johns‘ scripting we learn from them that Sinestro was not chosen to be a Green Lantern by the power of his ring.  The Guardians secretly forced the ring on him to neutralise his position as leader of the Sinestro Corps.  Their mission is to replace the lanterns of every Corps with the Third Army and then, ominously, to “replace everyone”.


Meanwhile, never short of a prophecy to throw a spanner in the works, the Book of Black delivers Black Hand the news he definitely didn’t want to receive…  Hal Jordan will be greatest Black Lantern of them all !!


The stage is set.  Battle lines have been drawn (even if it’s only the Guardians who know where exactly those lines are).  Wednesday’s annual and DC Comics’ forthcoming zero month promise to make tremendous opening salvos for what lies ahead.  And I do meaning opening.  For make no mistake about it, by the time #13 issues roll around the stories told in the Lantern books up to this point will be done and dusted.  Finito.  The Green Lantern universe is about to turn a corner.  A brand new tale from the Corps is just beginning and I am suggesting you grab your power rings and hold tight because we are in for one hell of a ride.   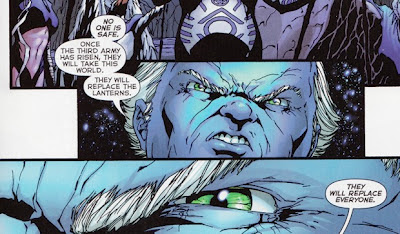 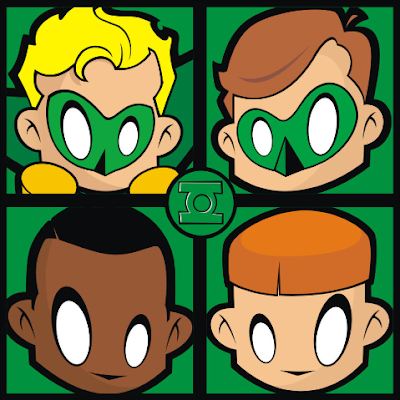 I recently discovered the fantastic pop art world of Heads Up Studios where artist Jay Brant puts his unique spin on our favourite heroes and villains from comic books, cartoons and sci-fi.

Construct of the Week #9

Boodikka - A lover, not a fighter!

 Anybody who started reading Green Lantern titles in the last few years will be familiar with Alpha Lantern Boodikka.  As an Alpha she is the embodiment of discipline.  We've seen in recent issues of Green Lantern Corps that she will enforce the letter of the Guardian's law at the expense of all else, even the life of a fellow lantern.

Readers who have been following the titles a bit longer than that will know Boodikka as a fiery hothead.  Possibly more than any other the GL she is an eternal warrior, resorting to arms at the slightest provocation.
﻿﻿
 There was a time, however, that Boodikka turned her back on battle, and discipline was the fartherest thing from her mind.  It was in Trinity (a crossover which brought together the Green Lantern Corps, the Darkstars and L.E.G.I.O.N.) that Boodika's head was turned by a strapping young man with an interest in pastimes much like her own.

﻿
﻿﻿ What started as a war of words ended as friends with benefits when the a chance skirmish brought the Lantern face to face with the Ultimate Bastich, Lobo.
Despite their shared love of combat, passions took Boodikka and her beau to another place and they managed to miss the fight completely.

 It's sweet really.  A case of girl meets genocidal alien.  Love's light twinkling like a diamond in the gruff.  Which does not excuse the horrendous sight confronting the poor L.E.G.I.O.N. trooper who is sent locate his superior officer some time later... 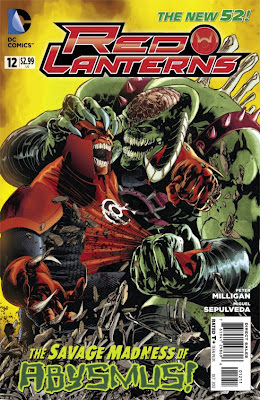 I would say, more than any other book in the Lantern series, Red Lanterns has benefited from the forthcoming Third Army event. It seems that Peter Milligan has been forced to get a move on if he intends to have his story of rage completed before the crossover drops into his universe and changes everything. And whereas it could be argued in books such as Green Lantern: New Guardians that narrative conclusions are being overly rushed, in Red Lanterns #12 I think Milligan finally hits the pace that many readers have suggested has been missing throughout this run.

This book is about the Red Lanterns finally becoming empowered and finding their true voice. And yes, that voice might be a little heavy on the Shakespearean prose but it is a voice that has been lacking previously. The principal characters in the book, Atrocitus, Bleez and Rankorr, had sought to understand their purpose in the world. Up until now we have been the psychiatrist to their turbulent self-analysis on all manner of indecisions surrounding the legitimacy of their mission and their waning humanity. But it is not the place of a Red Lantern to doubt or to introspect. They personify rage in its purist form. Their purpose is to burn with fury and dispense a mighty and bloody vengeance throughout the universe. That is the Red Lanterns book that the readers want to see; nay, deserve to see.

And, at last, that is what the reader gets. Facing defeat at the hands of his flawed creation Atrocitus uses the last of his ring's energy to send up a bright red flare. But not as a cry for help. It is a last defiant display of righteous anger. And when Rankorr comes to his aid he has given up the last vestiges of his former human life as Jack Moore. Raging at the slaughter of his brethren he conjures up a huge construct of their tortured demise. In a suitably gory showdown Atrocitus rips the hidden seed he had implanted in Abysmus years ago and reignites the failing Red Power Battery. Even Dex-Starr is given his dues. While still filling out the role of Milligan's comedic relief, it is a much darker comedy that sees Atrocitus toss the remains of Abysmus to the demonic feline to feast on.

Across space the Red Lanterns receive a charge and rise up to violently crush and destroy would-be assassins. Bleez and her rebel band shake of the influences of the Star Sapphire's and swear allegiance to their vengeful mission. The Lanterns return en masse to Ysmault to pay tribute to their cause in blood - literally the blood of their defeated enemies. A united Red Lantern Corps stand behind their leader once again, brandishing freshly plundered skulls and spinals columns, in Miguel Sepuldeva's in emphatic double page splash. Little do they realise this blood nourishes the newly resurrected bodies of Atrocitus' fellow Inversions who he had mutilated and murdered in a blood sacrifice at the inception of his Corps. 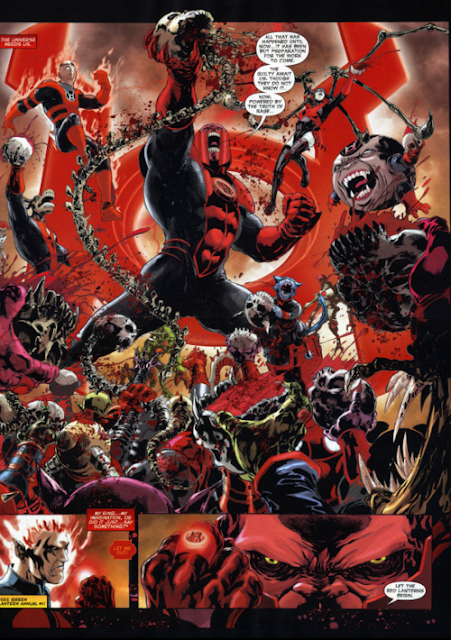 My mind races at the return of the Inversions.  They were last seen as undead Black Lanterns in Blackest Night. If they have been returned to life here who is to say that we won't see other characters obliterated in that event brought back into current DC continuity?

In Red Lanterns #12 Milligan and his creative team have produced a solid book that will make a perfect jumping on point for new readers bedding in for the Green Lantern crossover beginning in October.  But more importantly it will come as a huge relief to many long-term readers who have stuck with the book for a full year now in the hope that Atrocitus and his Corps would finally snap out of their gloomy fug and begin to serve up magnificent portions of terrible rage to the DC universe.

Construct of the Week #8 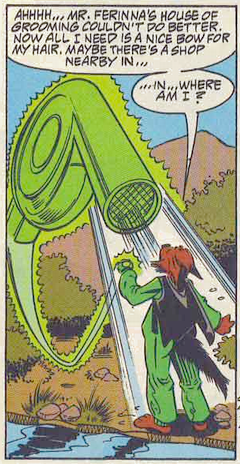 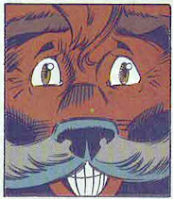 Email ThisBlogThis!Share to TwitterShare to FacebookShare to Pinterest
Labels: Construct of the Week, G'nort, Green Lantern

Silver Age Green Lantern - The Genesis of the Emotional Spectrum 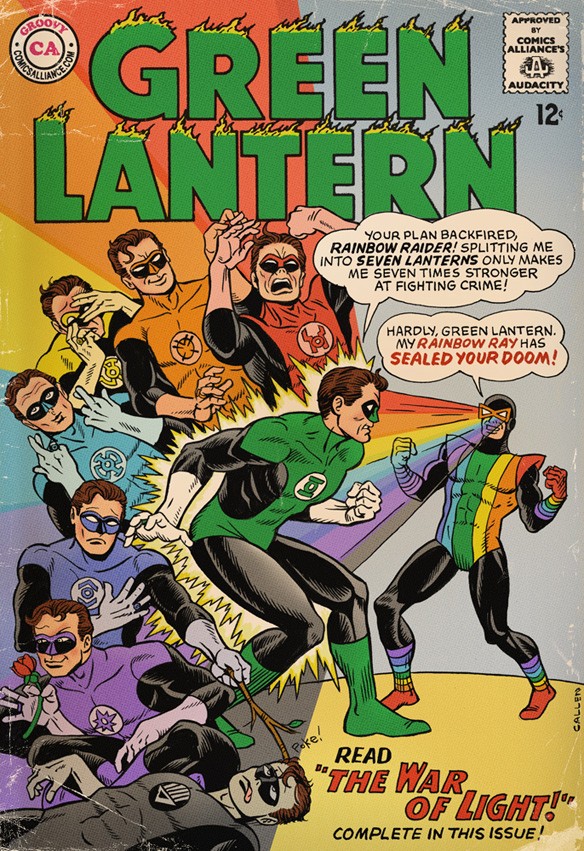 For many people, their first introduction to the Emotional Spectrum is through the works of Geoff Johns but, as this cover from the 1960s shows, the concept of the Lantern Corps' goes back a long way.  In an adventure that pitted Hal Jordan against the Rainbow Raider a very unusal energy had an unexpected influence over the Green Lantern.


Or maybe not...  This excellent parody cover was actually created only last year by a brilliant and hilarious comic book artist called Kerry Callen.  The piece was commissioned by Chris Sims of the Comics Alliance for a project that re-imagines modern DC Comics events in a silver age style.

I cannot recommend highly enough that you check out Kerry's other comedic cartoon capers on his blog, kerrycallen.blogspot.com, and his excellent Halo and Sprocket comic at www.haloandsprocket.com