The Ballad of Two Green Lanterns 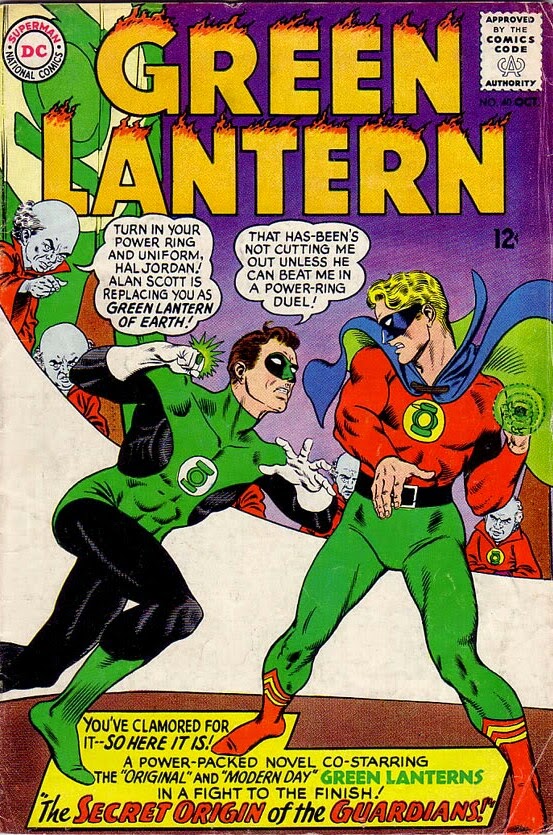 
A hero leaps into the air to get a better view


Of a cascading meteor on a fiery assault.


He shoots a beam of energy to bring it to a halt. 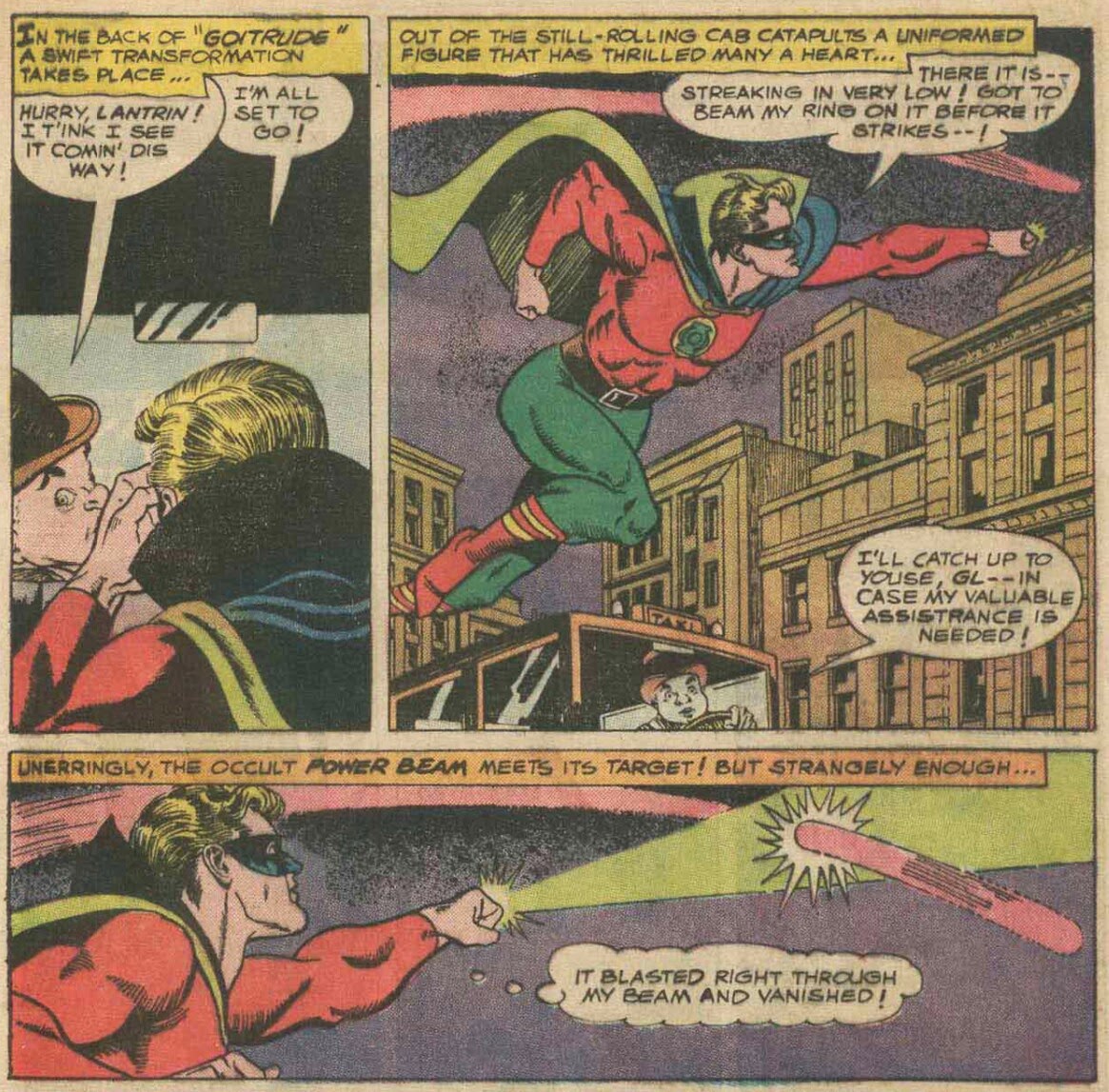 Mysteriously the shooting star disappeared before his eyes


And left our hero open mouthed at a marvellous surprise.


The hero was Green Lantern, wood the Achilles of his ring.


Until that fiery meteor gave him power over everything. 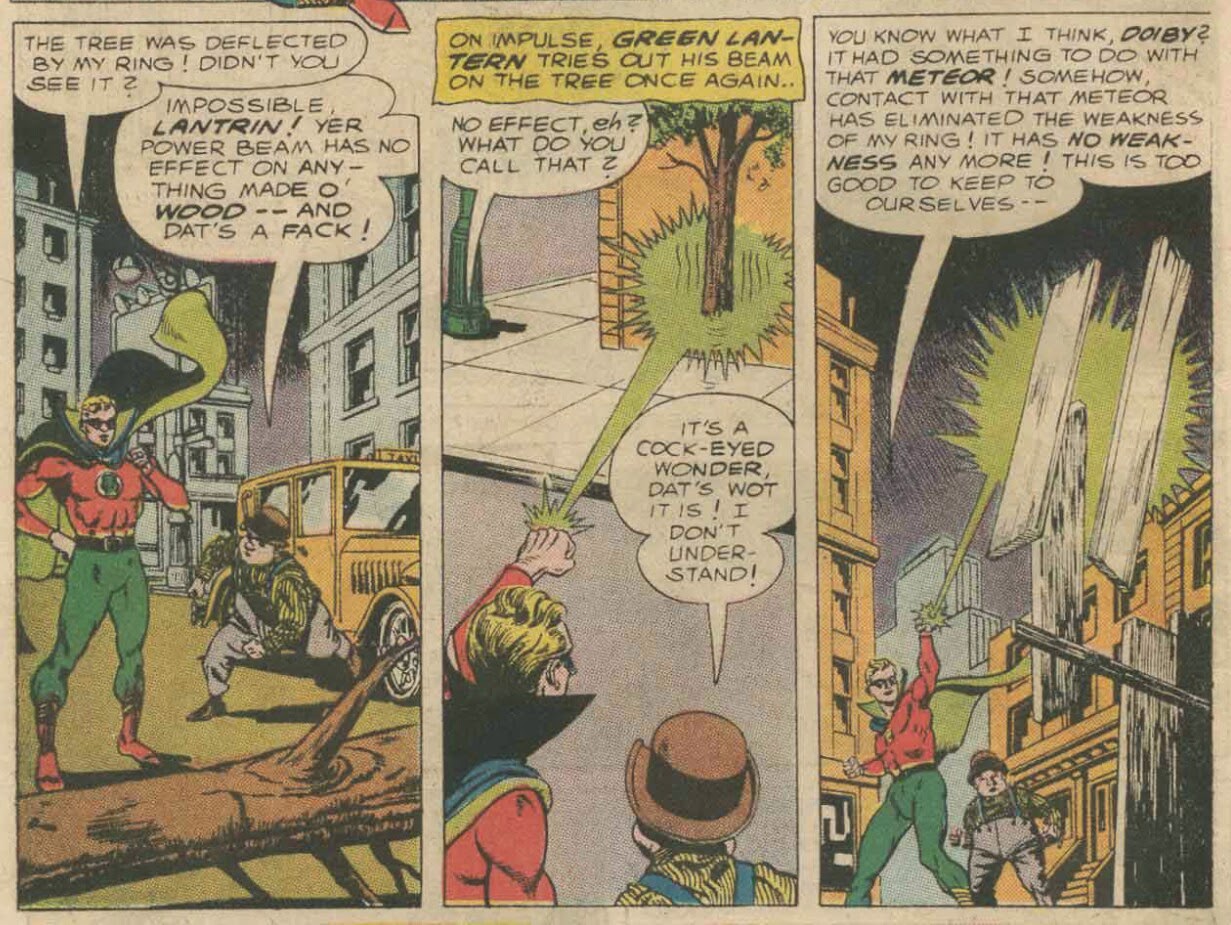 Immediately he hatched a plan, hesitation he had none


As he cleaved vibratory barriers to the world some call Earth One.


He vowed to find his counterpart, the Green Lantern of this place


And tell him of the meteor that fell to Earth from space. 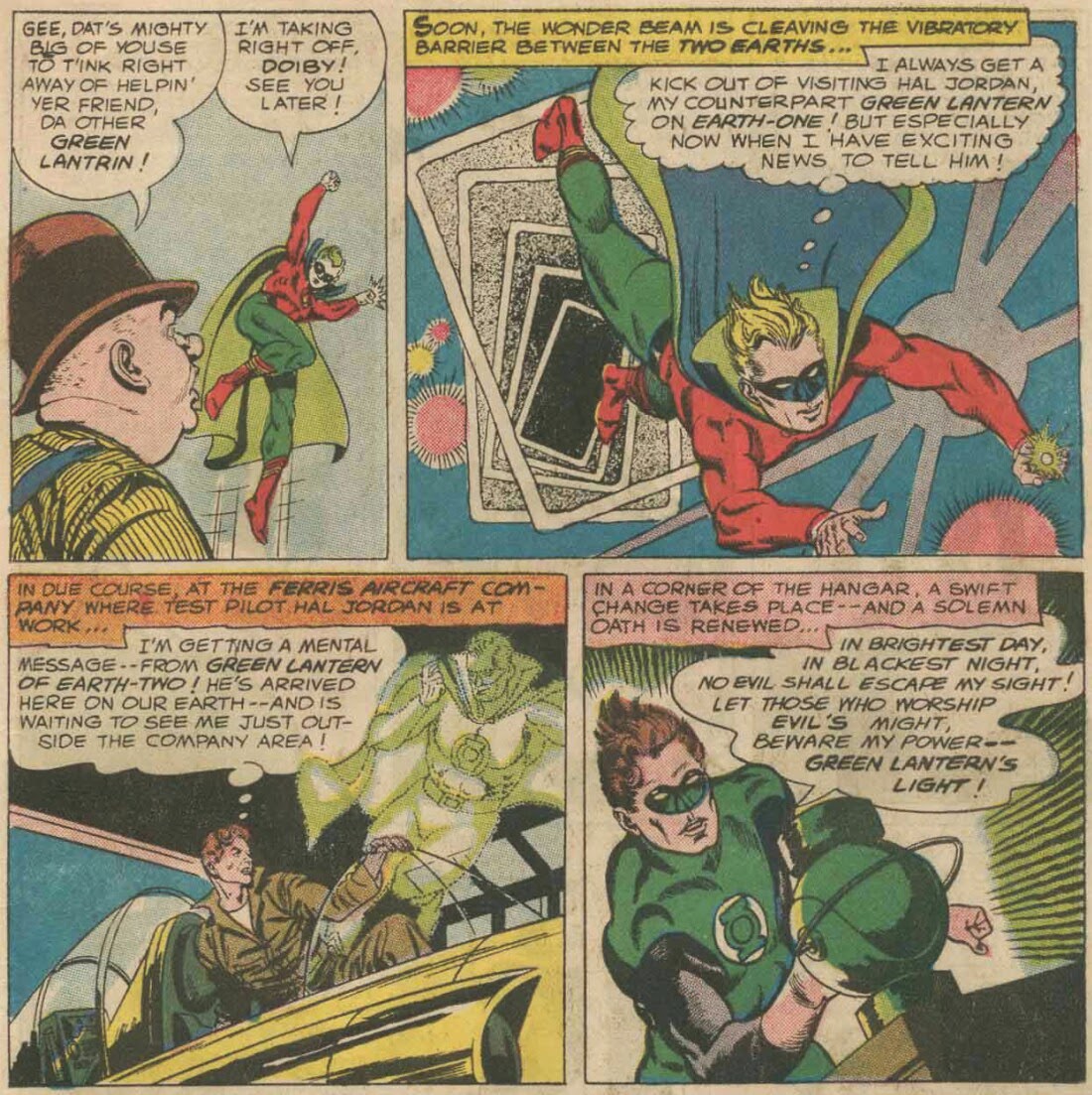 His friend deserved to hear the news, he was an amazing fellow


But he had a weakness too you see, it was the colour yellow.


Unfortunately when GL arrived all was not as he had thought


His ring had lost control of wood, his journey was for naught. 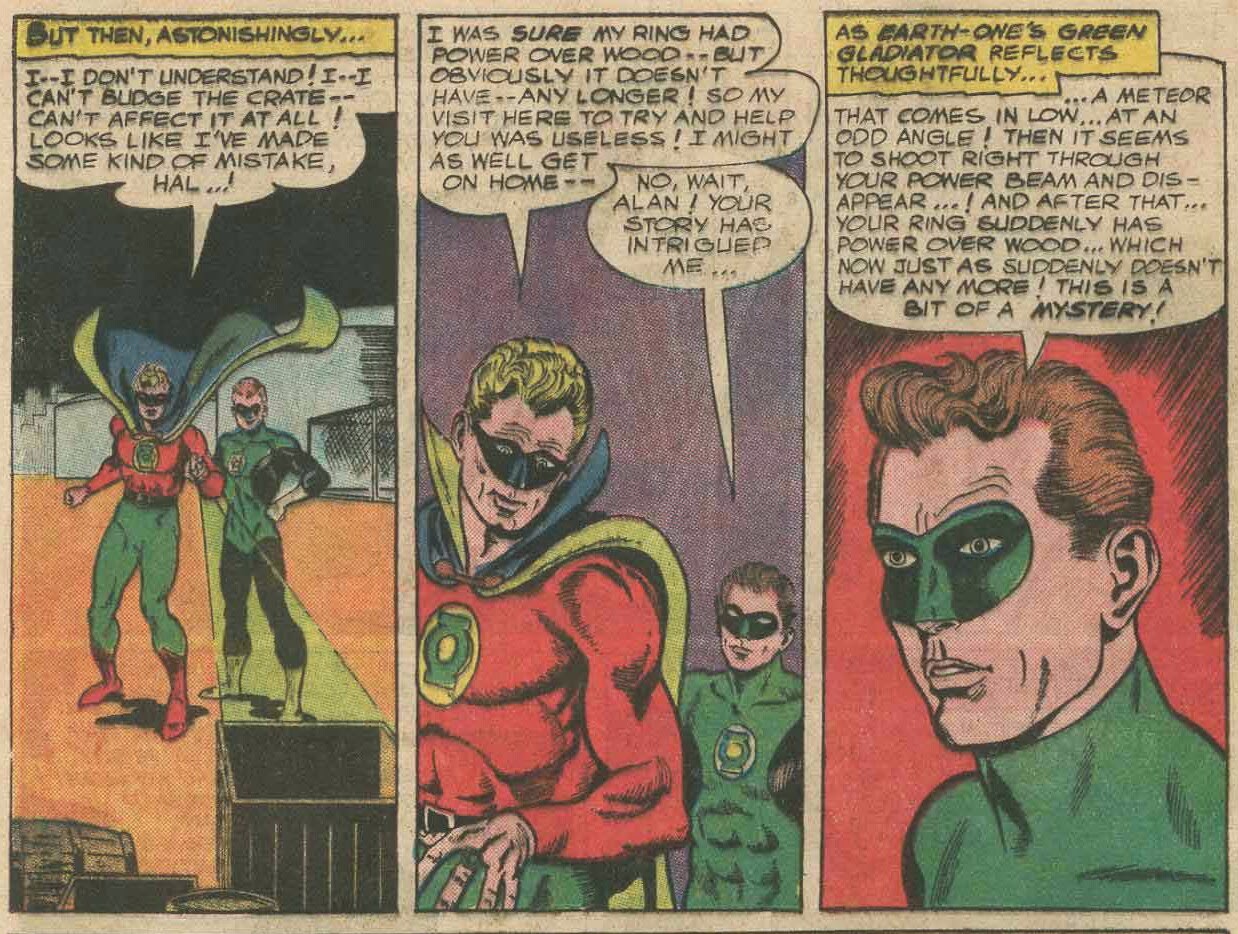 
And so his magic power ring revealed an evil plot.


An immortal was the cause of all, Krona was his name.


He had schemed to use Alan’s powers to further his own game. 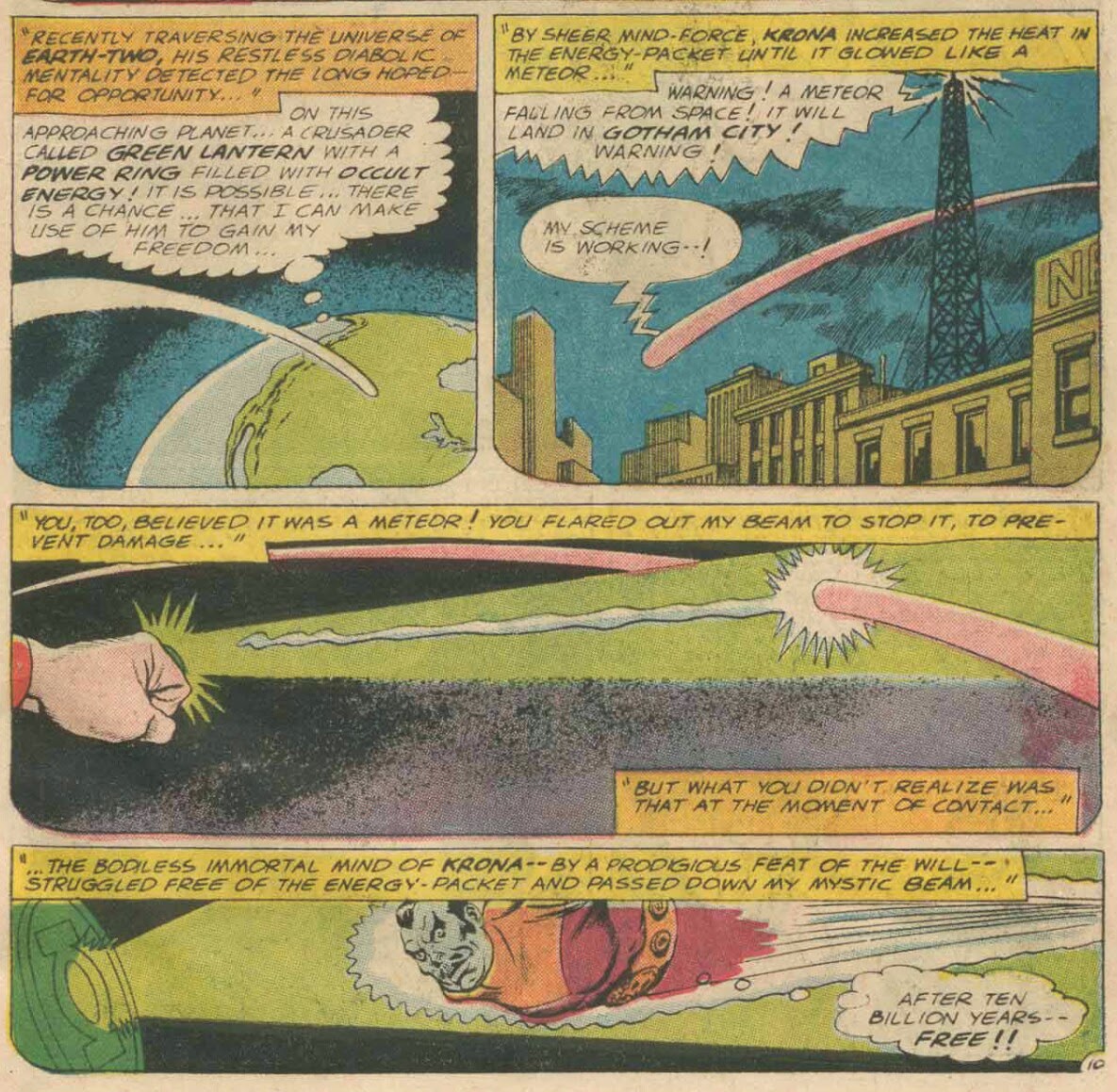 Krona had been imprisoned for the evil he had done


And could not escape the meteor unless he travelled to Earth One.


If he could fix his power ring and bring its weakness to an end. 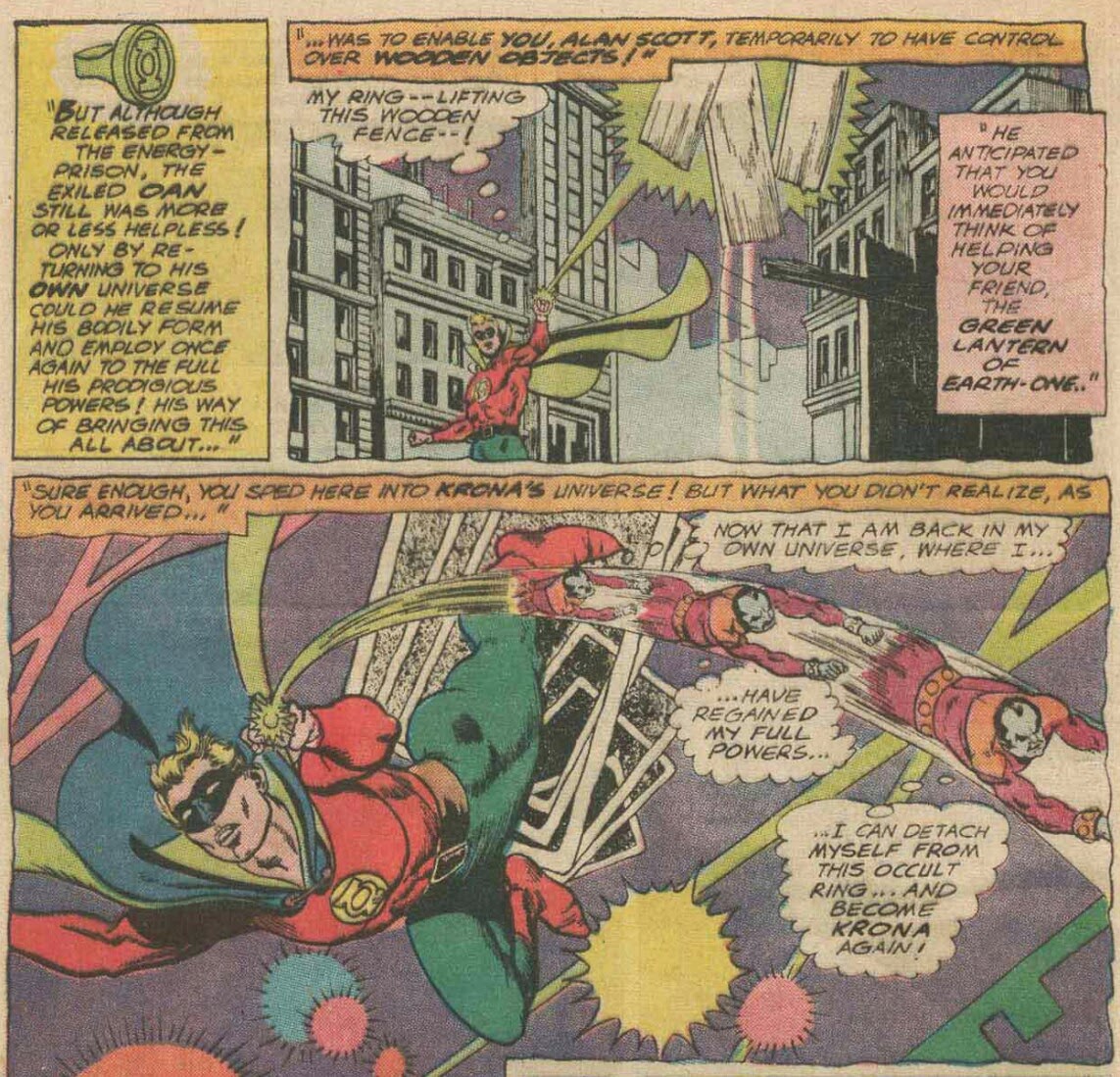 Krona’s plan had worked, of course. He was once again the master,


He set about to plague the world with disaster after disaster.


Hal Jordan, Lantern of Earth One, leapt to action straight away


To stop the winds and floods and quakes as he tried to save the day. 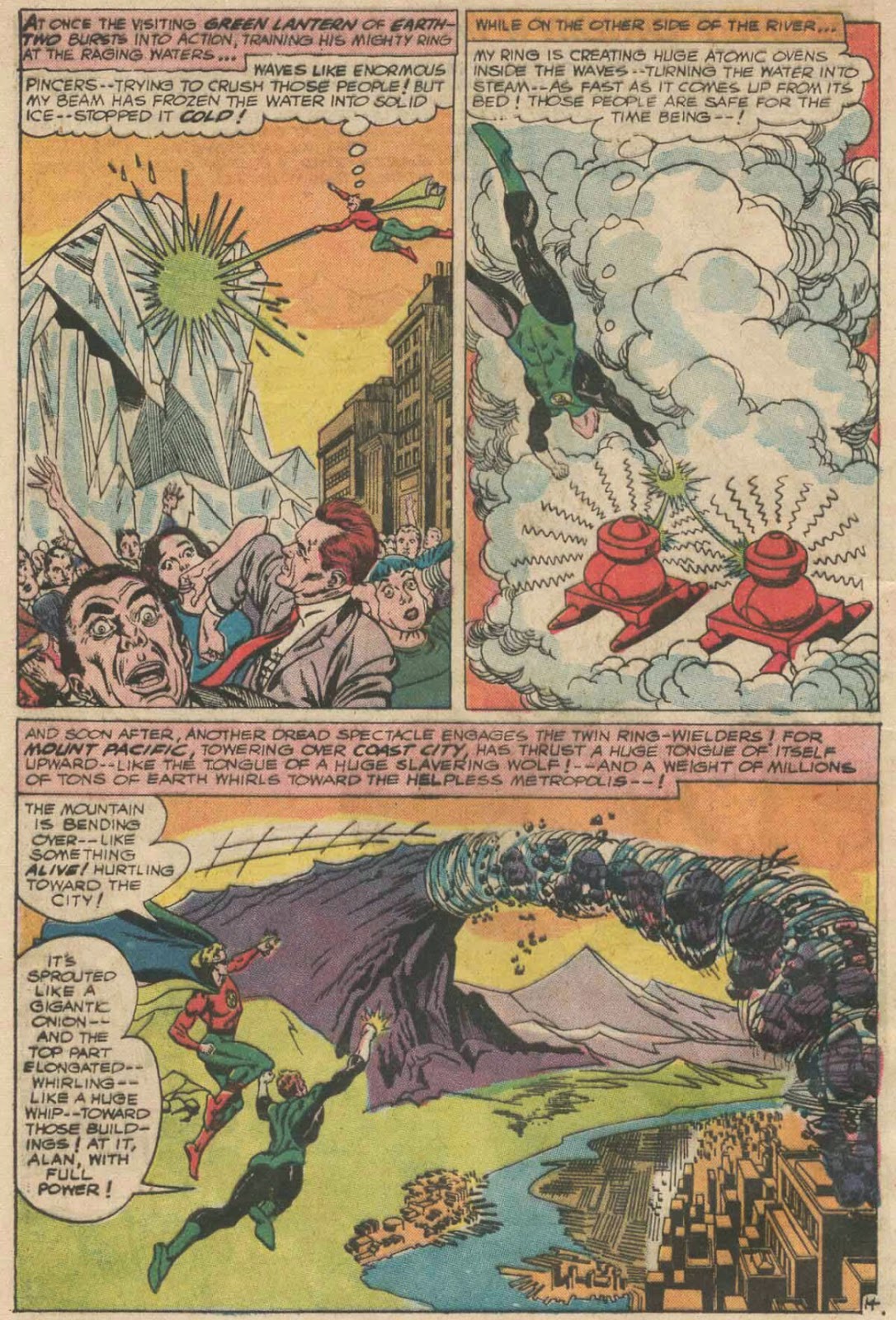 His Earth Two pal was at his side to lend a helping hand,


For our two heroes were mighty brave, with Will at their command.


But this not the end of things, even as the dust began to settle


Krona had one more trick to play to test the Lantern’s mettle.

He unleashed stupendous mental strength and took over Alan’s body


(Perhaps he liked the hero’s garb, so colourful and gaudy!).


I’m sure this is the fight that fans would like to see, 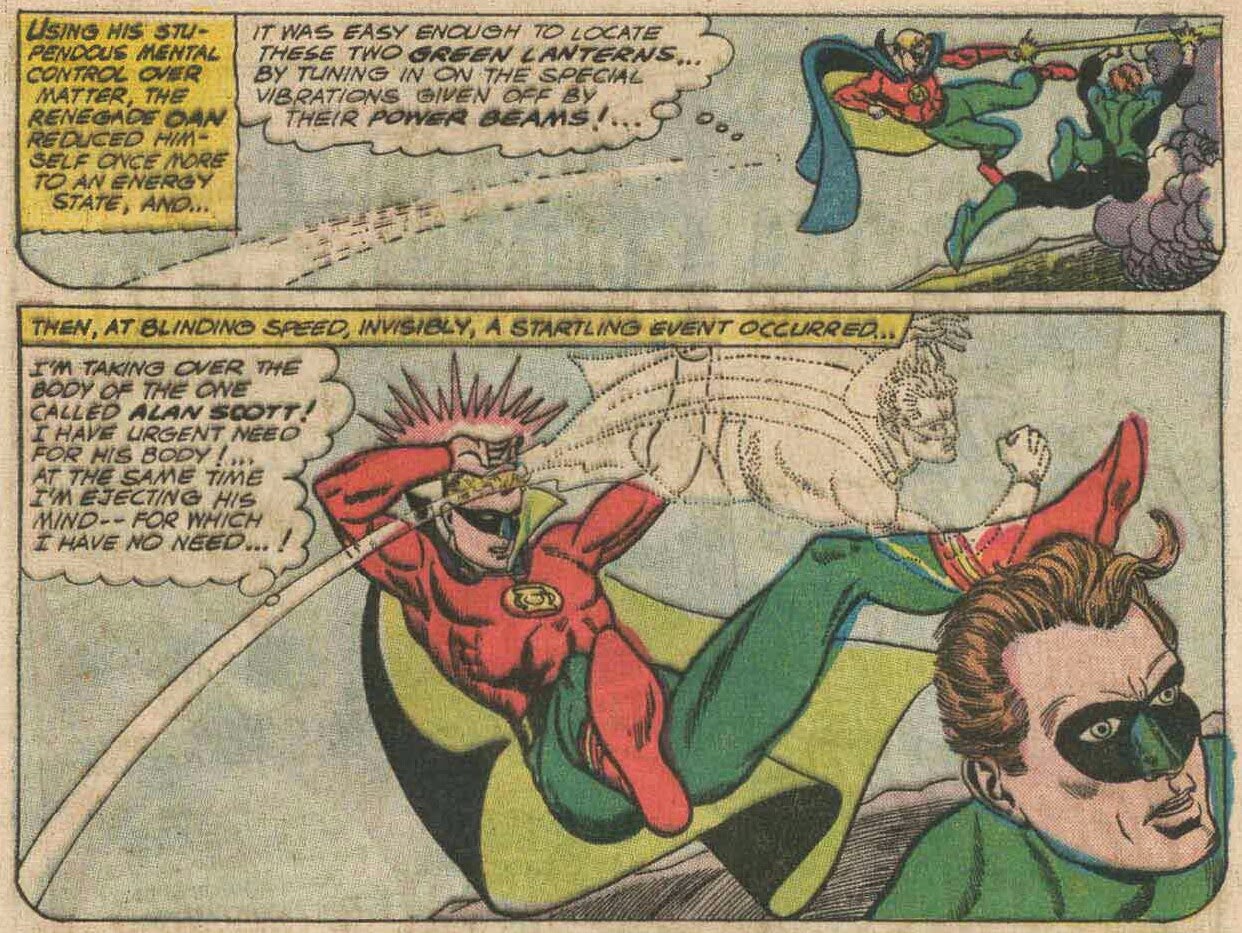 Hal Jordan was much less impressed, he had no wish to duel


His friend from another world; how could Krona be so cruel?


Even so he joined the fray, a duty to fulfil,


He’d beat the villain, free his chum and show the power of Will. 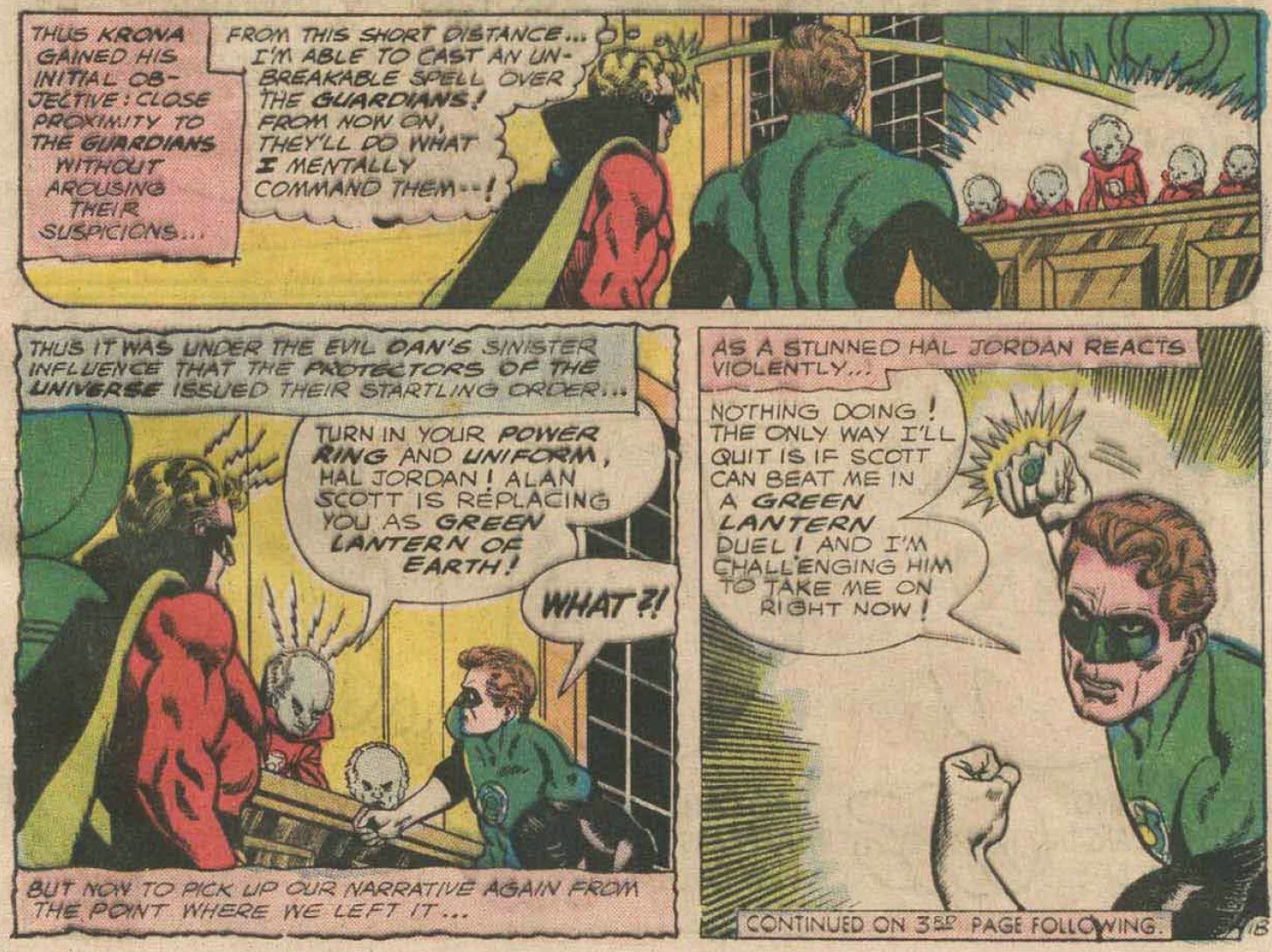 Alas it was not meant to be, Krona was far too clever.


He used his stolen Lantern powers to scupper Hal’s endeavour. 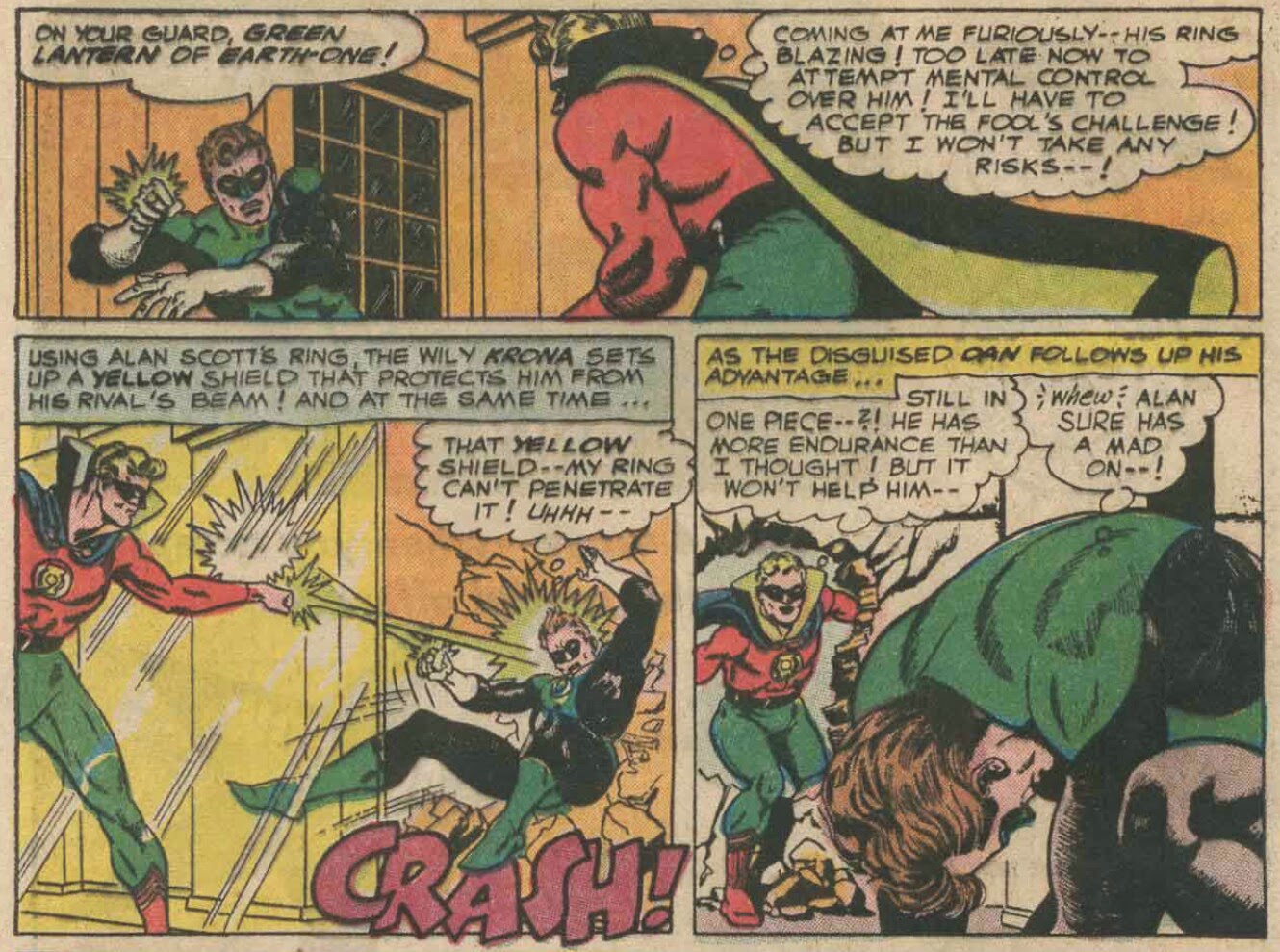 All the while Alan Scott had hid in Jordan’s ring,


He appeared now in the nick of time to take care of everything. 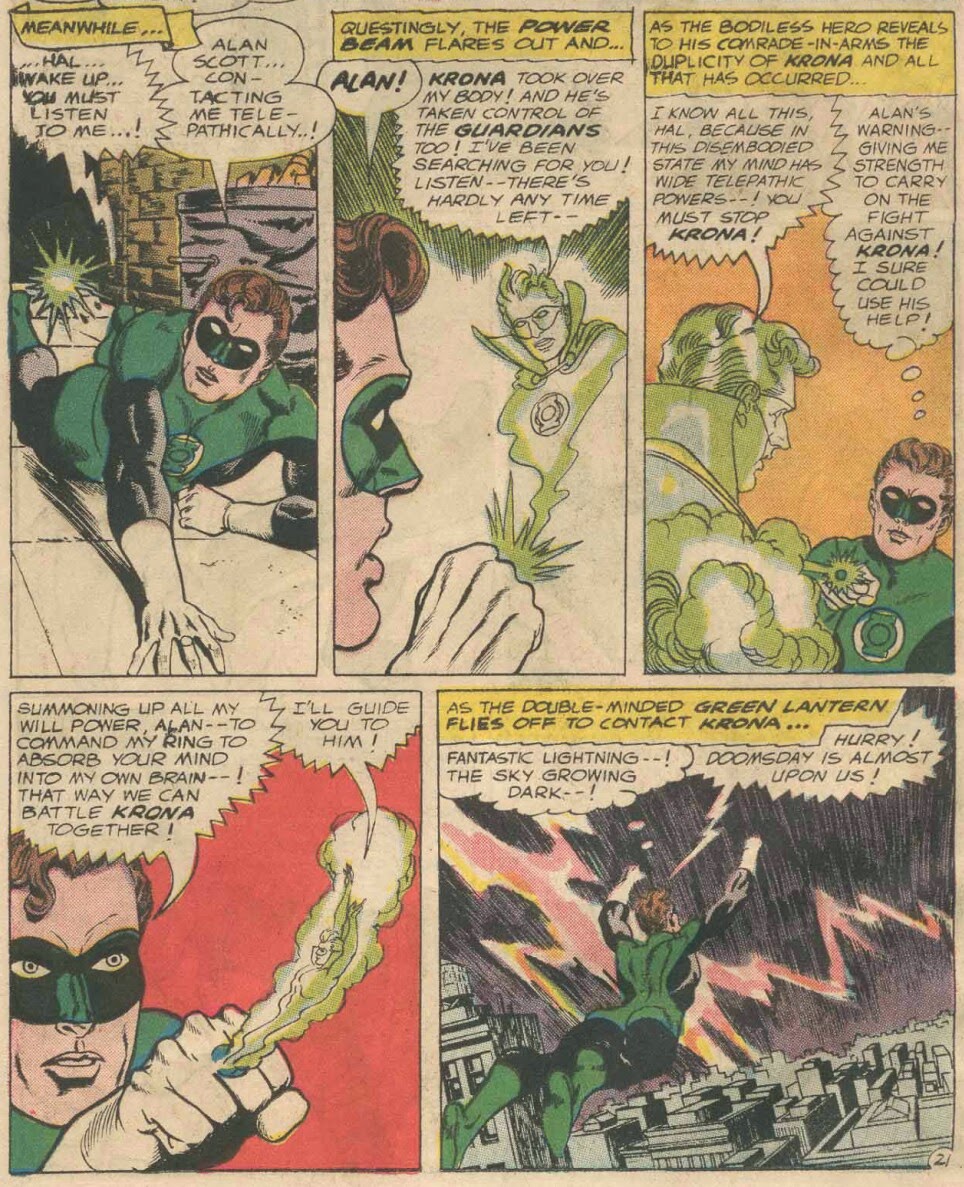 The two Green Lantern’s merged their thoughts, their brains became as one.


Convinced that joined together, they’d see the scoundrel’s scheme undone. 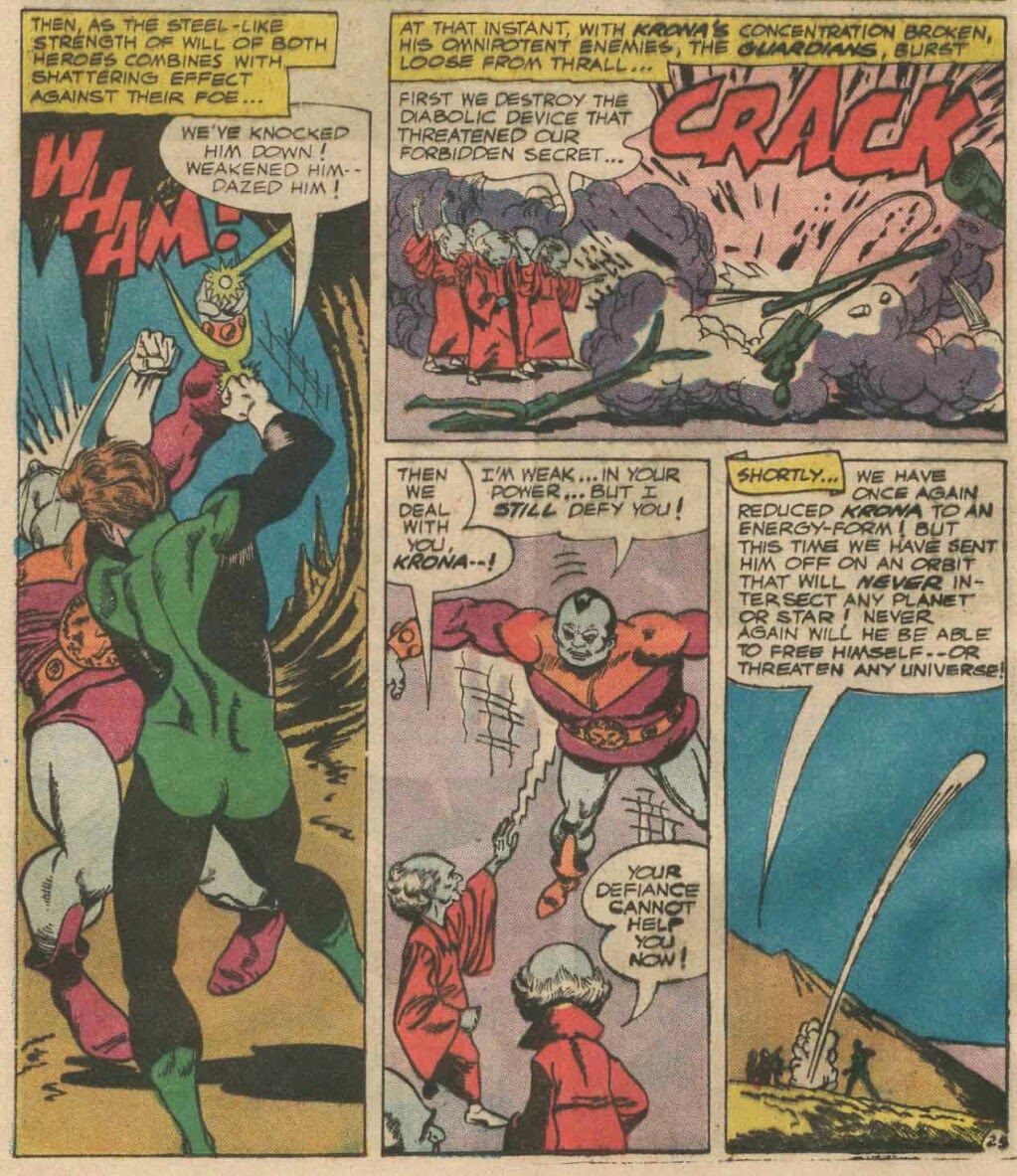 In the end the simple dupe of switching rings was all was needed.


With Krona beat, the world was saved, our heroes had succeeded! 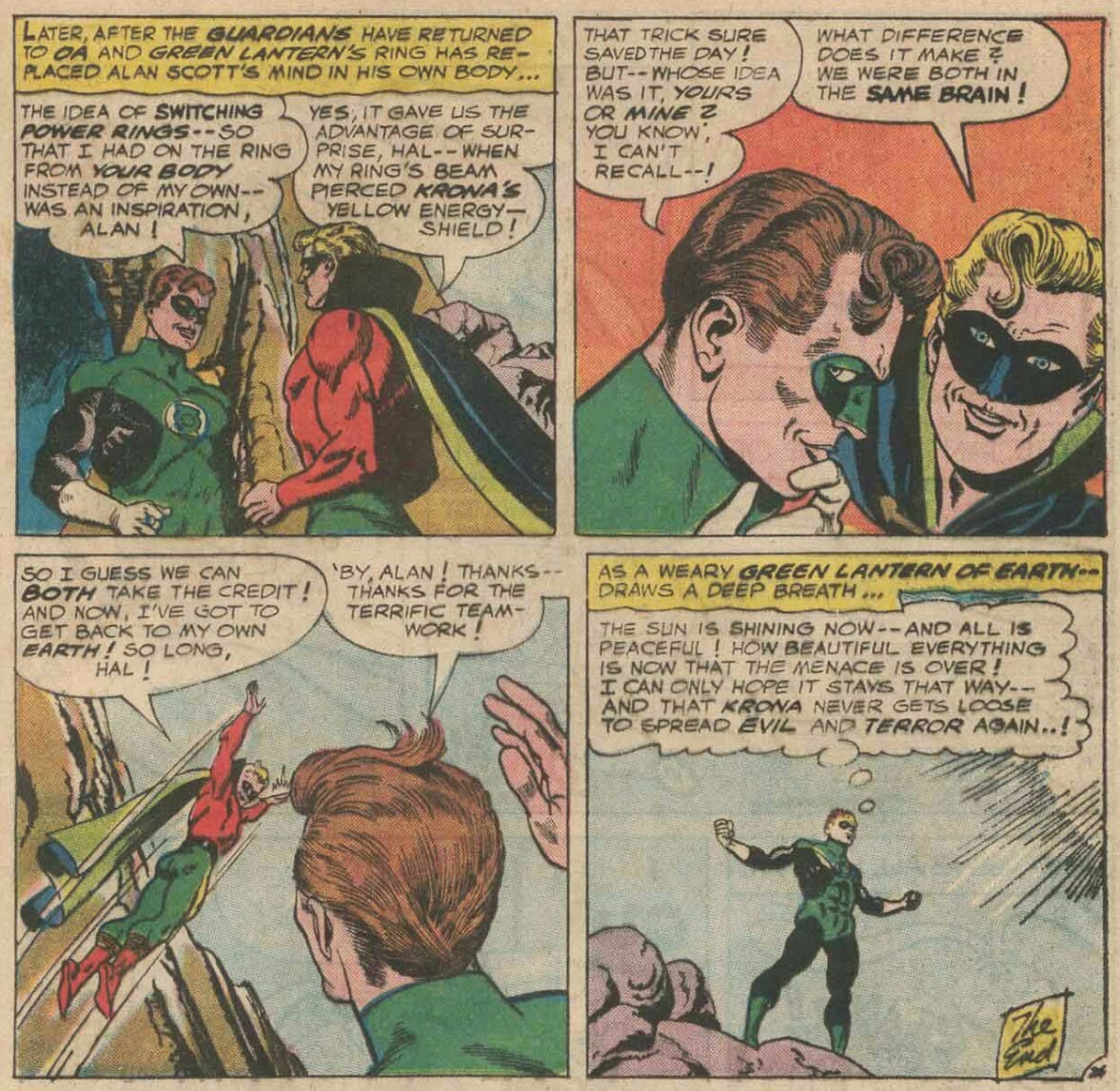 
A hero leaps into the air to get a clearer view


Of a burning meteor on a path of mass destruction.


But it’s no match for his Lantern power, an energy ring construction. 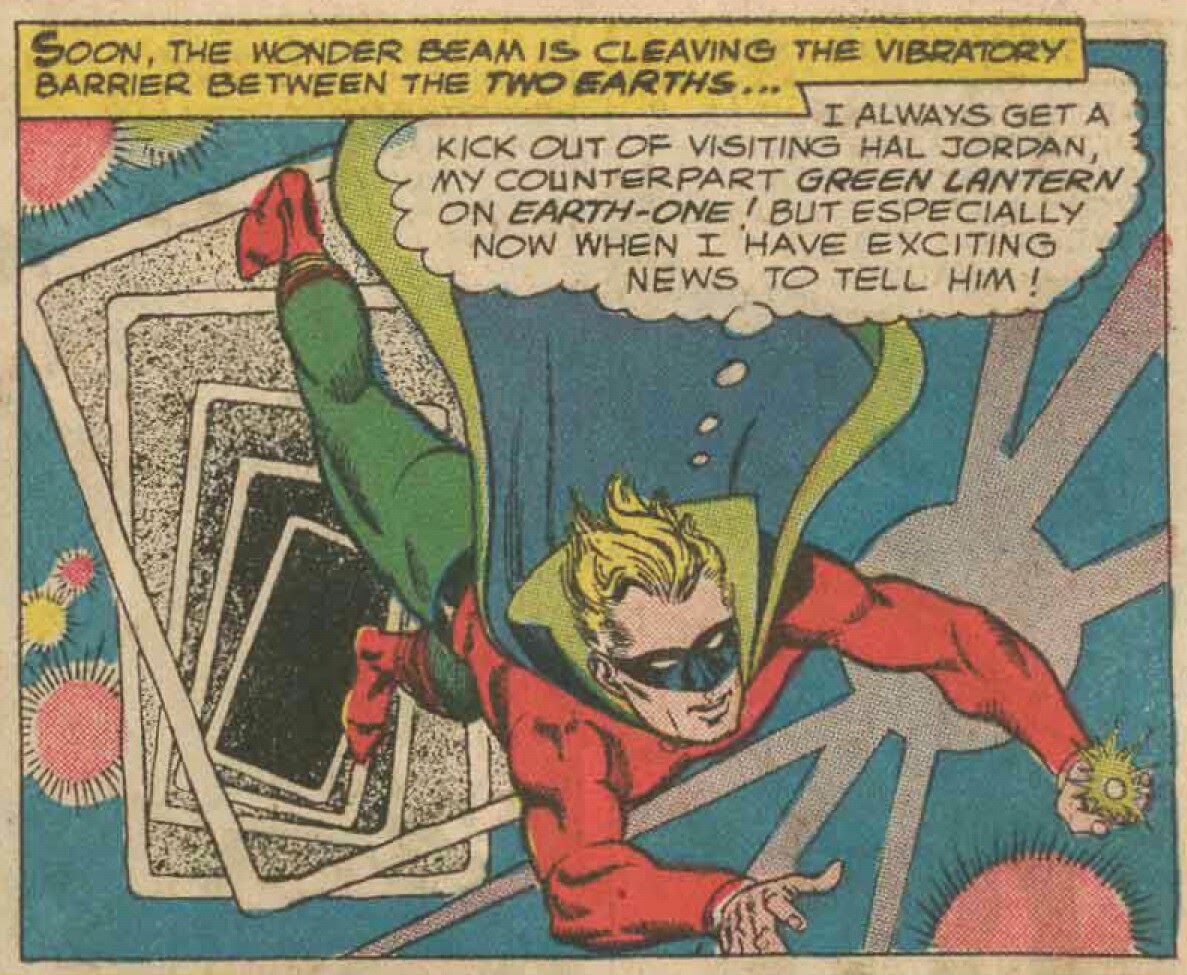 ****************************************
I hope you enjoyed my little ballad inspired by the parallel world adventure originally told in Green Lantern #40, (vol. 2), 1965. For more fun and frolics from alternate realities and other worlds please click the links below and join the Super-Blog Team-Up as they introduce you to a myriad of mysterious lands and strange places the like of which you have never seen before! 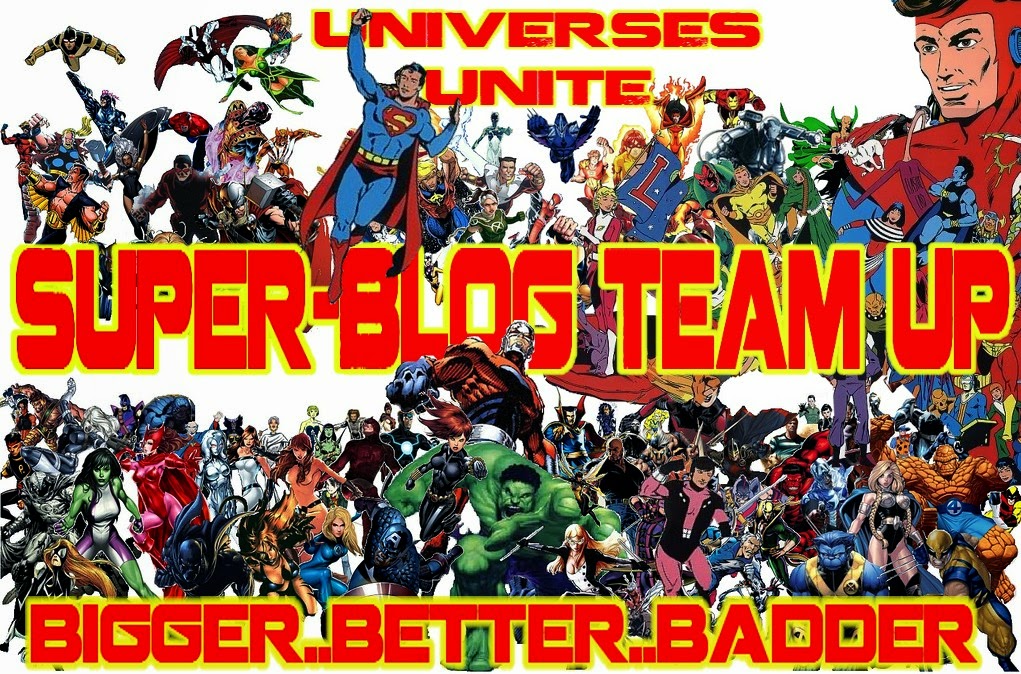 
Between The Pages
A Tale Of Two Cities On The Edge Of Forever
Bronze Age Babies
Things Are a Little Different Around Here...