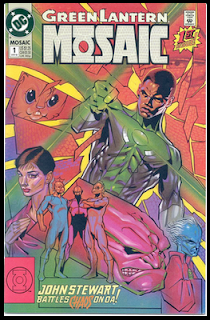 My favourite of Earth's Green Lanterns is John Stewart. It's true the man exudes cool, calm and collect from every pore but that is not why he comes top of my list. It's also true that he's probably the most intelligent Lantern ever to wield a ring in Sector 2814, and that he appeared in the popular Justice League animated TV series.  But again neither of these are the reason for my choice.  John Stewart gets my vote because he was the Mosaic World Lantern.  The Mosaic World was the most bizarre sociological experiment ever to spring from the immortal minds of the Guardians of the Universe.


Originally created  by the mad Guardian, Appa Ali Apsa, as a solution to his loneliness, the world John Stewart protected was a patchwork of alien cities stolen from across the universe and transplanted together on Oa.  The rest of the Guardians, exercising the sort of twisted thinking that would be well suited to the current post-War of the Lanterns GL run, decided the experimental world should remain in place.

Created by Gerard Jones and Cully Hamner, this book saw John Stewart deal with all manner of topical issues including, violence, death, racism, identity and mental disturbance.  Brutally realistic scenes depicting loss of humanity in one panel can easily give way to out an out slapstick moment in the next.  While Hal Jordan is chasing after Evil Star and Goldface in the main Green Lantern book (also penned by Jones) Stewart spends the first issue of Mosaic willingly being stabbed by psychopathic shape-shifting twins, quoting Fredich Nietzsche, and having arguments in his mind with a dead Guardian.

Rumour has it that the on-going series was cancelled after 18 issues despite strong sales because it did not fit the'vision' of DC comics. And I can understand that - Mosaic is not your average mainstream superhero title.  The closest comparison I have to give for someone who hasn't read the book is to think of Jeff Lemire's Animal Man sprinkled with a little bit of Watchmen.  I know how pretentious that sounds but as a description goes it is pretty close to the mark.

But I am not here to talk politics, be it within the comic book industry or in the pages of the books themselves.  That is for another blog and another blogger.  I do not intend to look at the study of the psyche or mental breakdown even though it undoubtedly lies at the root of my passion for Mosaic.  I am here to tell you how completely screwed up the images in this book are.  Born out the scripts of Gerard Jones and given life through the pencils Cully Hamner, Luke McDonnell and their guest artists, the Mosaic World is visceral attack on the optic nerves.  A place where the conscious mind shouldn't stray.  Or put simply, "one hell of a trip". 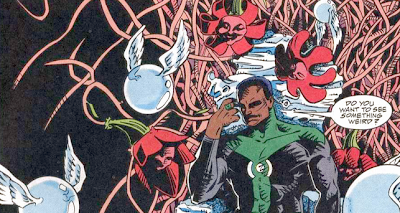 There is little doubt as to the intentions of the creative team on Mosaic.  Page 1 of issue #1 depicts John sat on a throne apparently made of animated bone-like faces.  A lizard plays at his feet on a lunar landscape while flowers with female faces writhe around him in a maze of vines that resemble the human intestine.  Winged bubbles float in the air before him. John asks a question directly to the reader, "Do you want to see something weird?"

If the answer is "No" you should put the book down now and step away from the longbox... 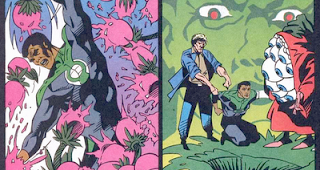 However, if the answer is "Yes John, please show me something weird" then you are in for the sort of treat that was only previously available from Shamans and back-street chemists.

As I mentioned, there are 18 issues to Mosaic, each one unique in its oddity.  In an attempt to stay in control of this mind-bending journey I am going to share with you 5 moments of madness that shouldn't happen to an intergalactic police officer... 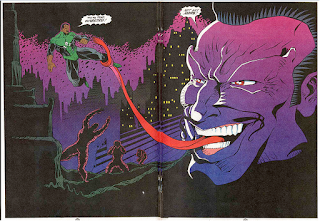 When you're number one enemy is dead and buried it's not entirely unreasonable to hope that he isn't going to appear to you in the form of a serpent before changing into a giant floating head with a hankering for Green Lantern hors d'oeuvres.  Unfortunately for John that is exactly what happens in Mosaic #3. 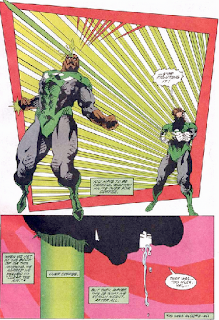 2. Stabbed in the brain by Hal Jordan

When the greatest Green Lantern of them all finds out you have been cuddling up to the ex-girlfriend he abandoned on Mosaic World it is never going to be easy.  This little jab in the cranial passage kicks of a battle between Hal and John that takes place on a mental plain... and is just plain mental (sorry about that one!). 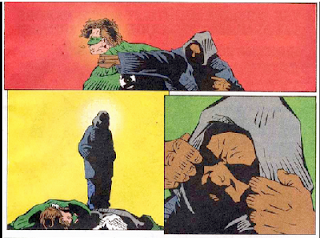 John eventually wins the fight, assuming the appearance of every figure who ever inspired the black community before giving Hal a somewhat less politically correct Ganstastyle KO (Mosaic #5).

It's hard enough being controlled by a dead guardian that lives on only in your mind, but being forced to dance the funky funk like a reject from Mary Poppins is one step too far for a distinguished member of the Green Lantern Corps.  But John's troubles don't end there as he becomes engulfed in a audio-visual experience that would leave your average Joe crying for his mommy.  Luckily all ends well in Mosaic #7 when John realises the music is another life-form on the Mosaic World and forges a bond with the creatures over the soulful beats of Cole Porter. 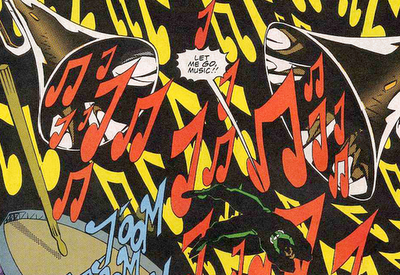 The retitled issue #11 is a complete mind-@!*# from start to finish... Check out some of these panels!

By far my favourite page of the whole book appears in Mosaic #14 courtesy of Luke McDonnell.  The lay-up for this page goes way back to issue #2. In a microscopic retelling of the Xanshi saga, the actions of John Stewart lead to the death of his fellow lantern Ch'p of sector 1014. Ch'p meets his final fate, in a darkly comic scene, as roadkill under the wheels of a big yellow truck. This was on the road John had built to bring the Mosaic cities together.  Ch'p's ego asserts itself in his mind joining Sinestro and the 'Old Timer' amongst other sto keep John company with a some 'far out' chit-chat while he goes about his duties.

In #14 Green Lantern falls under the enthrall of a telepathic pile of walking eyeballs called the Peeper.  While in a dream state, Green Lantern Salakk appears to John in the shape of a flying horse and gives him a kiss on the lips.  The kiss causes scores of little Ch'ps to appear all around Stewart freaking him out massively, to say the least. 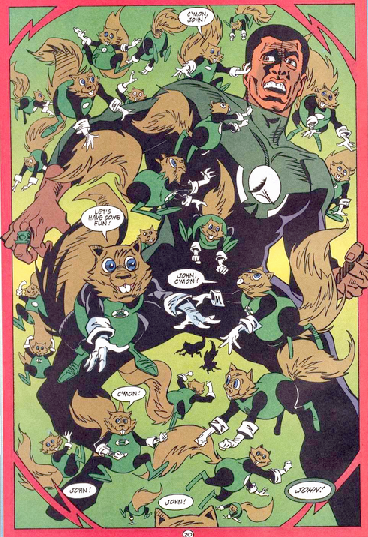 Appearing in the middle of a tense psychological story arc, the emergence of these flying rodent Disney demons freaks me out a little bit too..! 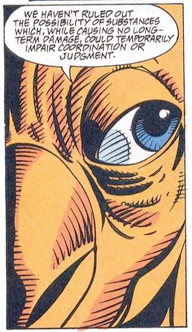 So be careful how you treat Green Lantern Mosaic; it ain't no Spider-Man book.   Jones et al want to take you on a wild ride with the brakes off and they aren't slowing down for stragglers.

I'll leave the final words to a future Green Lantern, Tomar-Tu, who was first introduced to us as an inhabitant of Mosaic World: