Green Lantern has joined forces with many heroes over the years in his battle against evil-doers but the team-up that is best loved by most fans is Green Lantern and The Flash.  From the long running partnership of Hal Jordan and Barry Allen to the rivalry turned friendship between Kyle Rayner and Wally West there are few stories that can hold a torch in the heroic stakes to the adventures of the Emerald Crusader and The Fastest Man Alive. 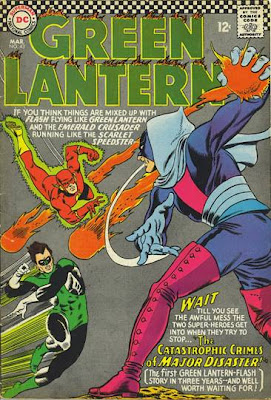 My favourite tale dates back to the Silver Age, 1966 to be precise, when the Green Guardian meets long-time foe Major Disaster for the first time.  The whole rip-roaring saga takes place in the pages of Green Lantern #43, volume 2.

Cleaning up after a series of seemingly natural disasters should have been easy work for our superheroes but right in the middle of their mission both Hal and Barry suddenly lose control of their powers. 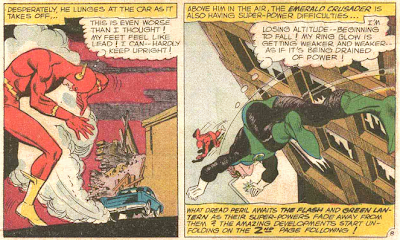 The storms and earthquakes, of course, are far from ordinary occurrences.  Common criminal Paul Booker had learned the secret identities of both GL and The Flash and began to plot their downfall as the pinnacle of his nefarious career.  To this end he hired a group of scientists to create a machine that controlled the weather and could stir up geological catastrophes on his command.

Added to this, in their very own freaky Friday moment, the boffins were able to swap the two heroes powers from one to the other.  Thus far Major Disaster’s plan was working perfectly.  Not realising they had control of their friend’s abilities, Hal and Barry assume they are now completely powerless.  What the Major had not counted on was the heroic spirit possessed by both men. 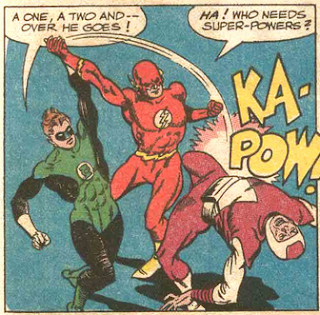 Rather than pack up and go home our champions resolve to come together to tackle their deadly adversaries.  Relying on fighting spirit and the “Justice League tactics” of working as a team they make swift work of Disaster’s cohorts.
Later, as Hal tries to recharge on his hidden power battery, the true extent of their peculiar position becomes obvious to them. 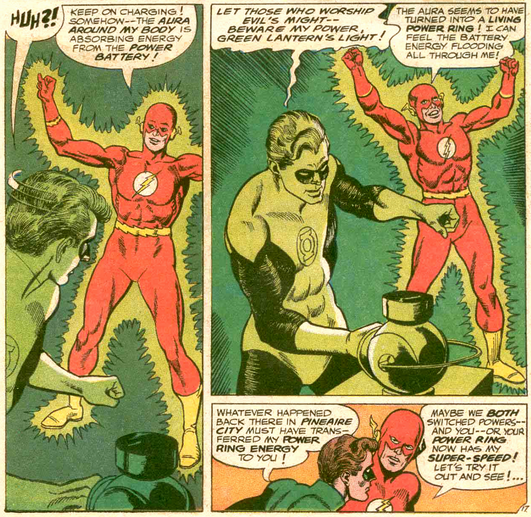 Instead of replenishing the Lantern’s ring as expected, the green energies power up the Scarlett Speedster standing next to him. 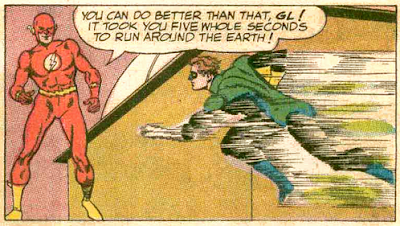 Naturally Hal has also become lighting fast.  Within moments of making the realisation the two superheroes are back in action.

Meanwhile Major Disaster continues to wreak havoc on a crime spree across Coast City and Central City with his dastardly machine providing cover.  Green Lantern and The Flash follow in his wake rescuing the embattled citizens of both metropolises.  The fact that they are in control of powers that are unfamiliar to them gives them no pause in their pursuit of the rogue weather-master.  Hal zips and zooms around landslides and ice-storms while Barry deftly forms emerald constructs to hold back floods and stem the spread of forest fires. 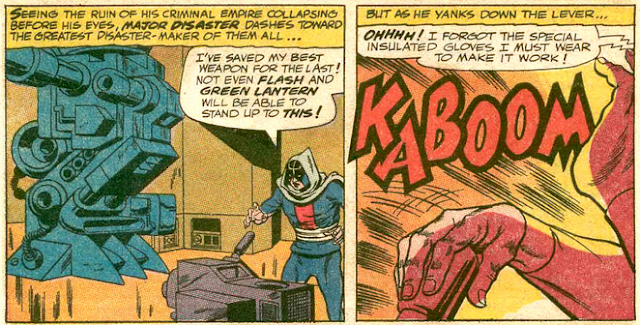 Although they do eventually work out how to transfer their powers back again it is ironic that they don’t get the chance to bring their opponent to justice.  Feeling the heat of the incredible duo on his tail Booker becomes the architect of his own doom.  In his haste he forgets to don the insulated gloves that protect him from his sinister machine.  The contact causes an explosion that destroys the device and takes the unwitting villain along with it.  In the end it is his lifeless corpse that the superheroes discover in the rubble. 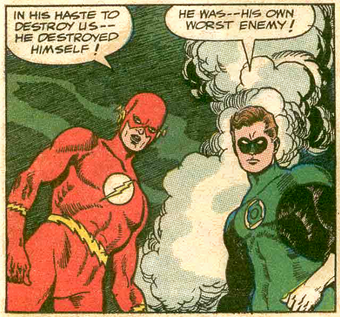 Or is it?  This is comic books after all…
Posted by Unknown