(The following review was largely written a week or two after the original publication date of Green Lantern Corps Annual #1.  It was a time of innocent excitement; it was before news of the GL creative team departures was widely known.  In some respects this is a last chance to remember what Fantern life was like before ‘The End’). 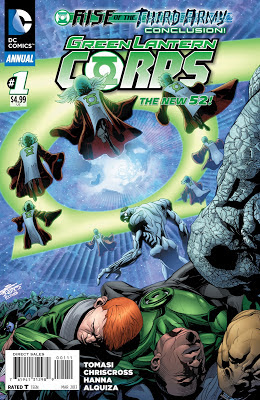 I’d like to take a moment if I may to cast your thoughts back to August 2012 when DC Comics released the Geoff Johns penned Green Lantern Annual #1.  The oversized publication did much to maintain Johns’ reputation as the quintessential mythmaker of the Green Lantern universe.  It was in that issue all those months ago that the Guardians of the Universe finally revealed themselves as the malevolent force we the readers had long known them to be.  Here too were the first rumblings of the Third Army that promised to sweep ferociously across the DCU.  In those early moments we were hypnotically entranced as they assimilated their human victims.  The kind of horror you can’t look away from even though your mind is screaming at you to run.  We were also introduced to another breed of Maltusan, cousins to the Guardians, who showed potential for great things.  And, more than all of this, we encountered the First Lantern trapped in his multi-coloured prison of emotional energy.  Johns’ teased his appearance to deftly to bait us in a way that only the very best writers can – and he and his fellow GL creators have continued to tease us ever since.


In the meantime we’ve been introduced to a new Green Lantern in the form of Simon Baz and over in Green Lanterns: New Guardians Kyle has completed his quest to become a White Lantern.  While both of these developments are hugely interesting in themselves little has happened in the intervening months to match the excitement and invention of that GL Annual.  The story of the Third Army crept along in an underwhelming fashion despite its colossal opening salvo. With all this in mind I am delighted to be able to report to you here that the GLC Annual concludes the crossover event in fine style.  Perhaps it is only right and proper that annuals give a little bit more bang for your buck than their monthly counterparts.  And not just in page count either.  In this issue Johns’ former editor and writing partner Peter J. Tomasi proves he is just as capable of producing an oversized Green Lantern book that is a compelling page turner from cover to cover.  By comparison it almost wasn’t worth making us wait so many months for the story to get to this point. 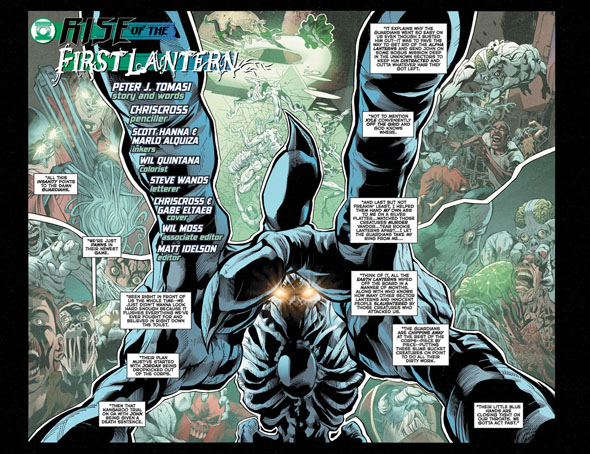 The art in the book is not handled by the usual Green Lantern Corps team.  This is likely a result of time constraints in production but I like to think that it might partially because the annual is a bit different from the monthly title.  Tomasi has to tie together plots that occur in the four Lantern tiles contributing to the ‘Rise of The Third Army’ crossover and in a weird way the pencils of ChrisCross lend themselves very well to this task.  He manages to take a little of the tone from each book and melt it down into a very successful sequence that pays a passing tribute to all of them.  It is only a small point but the colouring from Wil Quintana is a little overstated for my taste.  It sounds an odd thing to say but when you have seen as much green in a comic book as I have you become something of a connoisseur and the green in the opening page for example is just a little too… green.

It is a comic that reads well as a standalone issue even though it is the final act of a 19 book crossover event.  The sheer numbers of characters featured in the book would be considered staggering anywhere else but this is Green Lantern where over the last nine years the projection of epic has been honed to perfection.  An intense battle with the future of the universe as the stake escalates in a rolling crescendo of action. 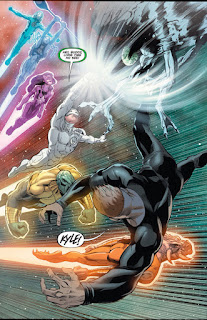 Beginning with a murmur, ChrisCross’ rendition of Kilowog trudging through the foundry tunnels beneath Oa is priceless.  This is one ugly poozer.  The likeness of the veteran lantern from Bolovax Vik is more than a little reminiscent of Joe Staton’s original artwork for the character way back in Green Lantern Corps #201 (v.2).


Not long after a powerless Guy Garnder rocks up to Oa in an armored flight suit created from the construct of his Lantern buddy, B’dg.  Thinking about this and previous appearances going back to Emerald Warriors and beyond I wouldn’t be at all surprised to hear that Guy is Tomasi’s favorite Lantern.  That is one double-hard GL we are dealing with.


Fresh from the pages of Green Lantern, Baz and B’dg don’t take long to get themselves in the worst kind of trouble.  They get sucked into the Book of Black through the gaping mouth of the First Lantern.  On the face of it this doesn’t make a whole lot of sense but it captured my imagination no end.  It’s the first portent we get signaling the level of control the First Lantern, Volthoom, could potentially wield over our heroes. 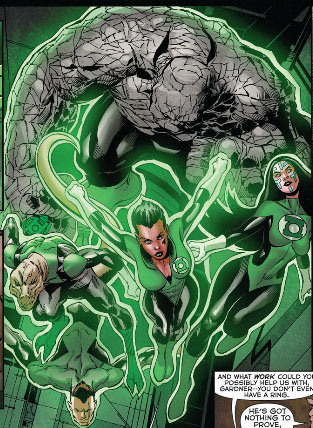 More layers are added to the narrative when Kilowog’s squad of rebel GLs is revealed to include the likes of regular fan favorites Soranik Natu and Vath Sarn, who have not been seen in these pages since the DC’s New 52 was launched.  Outside of these couple of panels the characters don’t really do anything of note.  Their appearance is simply a crowd pleaser and in that respect it succeeds amply.

Again giving the fans exactly what they want, the largest and most powerful Green Lantern in the history of the Corps is returned to us when Mogo reforms his planetary mass and successfully blasts a platoon of deadly Thirdites out of existence.  Soon lanterns of every colour have joined led by White Lantern Kyle.  Atrocitus’s reprogrammed Manhunters as shown in Red Lanterns arrive to fight shoulder to shoulder with the warriors of the emotional spectrum.  My personal favourite moment in the book is a scene where Guy Gardner appears to attack the evil Guardians single-handed while still depowered and vulnerable.  Cut between panels are glimpses of Kilowog quoting the Green Lantern oath.  His ferocity grows with each line delivered.  It becomes clear that Guy’s efforts are only a distraction as a super-charged ‘Wog forms giant hand constructs to tear the planets crust in two and free the hundreds of Lanterns from massive Guardian death trap in the process.
Sensing defeat at the hands of their former servants is imminent the Matusans syphon more and more energy from their mysterious prisoner, the First Lantern.  The tide of the battle turns quickly and now it is the Guardians who look to be unstoppable.  As it transpires this last audacious move was their undoing.  They drew enough power to weaken the First Lantern’s cage. Suddenly he breaks free and promises that everything the Guardians created “will be no more.  At the same time art panel after art panel fades to white as if the very comic itself has been bleached away.  Thus, without a seconds respite, begins the “Wrath of the First Lantern” and the next rollercoaster crossover event is set in motion. 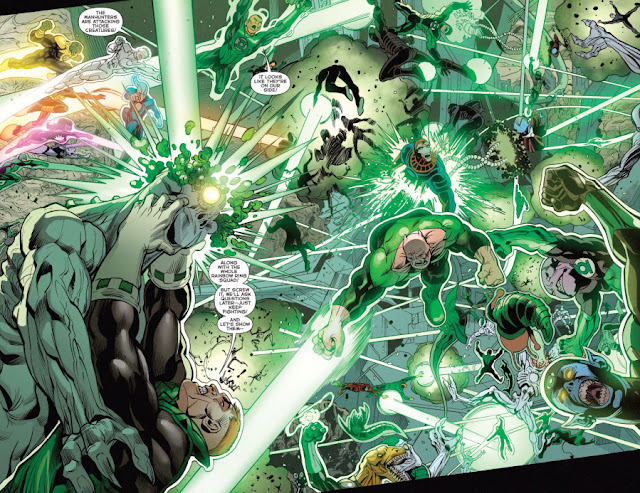 It is one thing after another for our Green Lanterns and, as a fan, I feel we are right there along with them.  DC Comics and creators Johns, Tomasi et al. have no intention of taking their foot of the pedal on this one.  What other superhero comic who handle that sort of intensity and just keep on going?  At least over in the Batman, the caped crusader gets a few hours off at the end of each mission to share a cup of tea with Alfred.  Our war-hardened GLs have no such luxury…