THE PROBLEM WITH YELLOW

As most Green Lanterns over the last billion years or so will attest to, yellow impurities suck.  One minute you're saving the galaxy from certain doom, barely breaking a sweat, thoughts drifting to the planetary lap of honour you intend to take when you've finished, one eye on the tea and biscuits waiting for you in the Corps mess back on Oa... when all of a sudden that destructo-bomb turns out to be yellow, the monster du jour breathes unstoppable golden flames and the bad guy turns up in a pastel lemon suit firing bullets of a certain shade of dandelion and hocking up buttercream spitballs.

Well, gigantic alien monsters and Weapons of Universal Destruction are one thing.  Not pleasant but the sort of stuff a GL is warned about in basic training.  But what about the more mundane side of life?  When a two-bit crook takes you down with a pocket flashlight, that's just plain embarrassing!  The most powerful weapon in the universe, "Green Lantern's Light", is negated by the fog lamp from a very ordinary automobile - is there something wrong with this picture?

Luckily they don't call Hal Jordan 'the greatest Green Lantern of them all' for nothing!  Our quick-thinking hero has more than a few ways to get round a little old thing like a yellow impurity.  And if all the usual tricks fail? Well, sometimes I think that's just Hal's excuse to break out a good old fashioned dose of fisticuffs.  He does so like to "Zwok" it to them, after all. 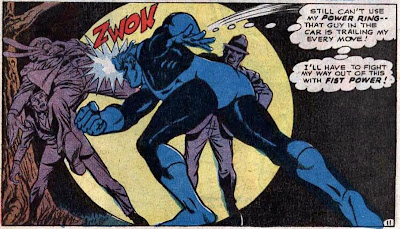