There have been many poignant moments in Green Lantern comics. Death and Lanterns are never far apart, as this long list of fallen heroes posted at the GL Wiki goes to prove.

But for my money, the saddest moment of them all comes in Green Lantern #224 when a brave little gas bubble sacrificed himself to protect his fellow Corpsmen and to save the universe from certain destruction (for the second time!).  In this, the final issue of GL volume 2, the Corps inadvertantly cause the destruction of the central power battery on Oa.  Mere minutes before they had taken the impactful decision to execute the renegade Lantern Sinestro for crimes of genocide.  What they did not realise is that the Guardians of the Universe had built a failsafe into the battery that prevented wielders of the green light from harming anyone from the Sinestro's home world of Korugar.  The reasons were noble in their intention but the disgraced former GL had somehow corrupted the Guardian's programme in the final moments before his death causing the power source to become a ticking time bomb of universal destruction. 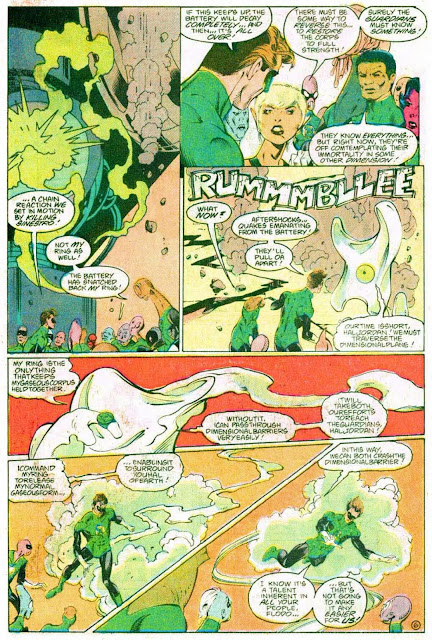 To make matters worse, the only people who could explain what was going on and how it could be stopped where the Guardians themselves. Unfortunatley they had recently retreated to another dimension to meditate and reflect on the purpose of their immortal lives.  It was for this reason that Flodo Span had volunteered to give up his corporeal being in order to transport Hal Jordan to that other dimension.

The only problem with his plan was that Flodo would need his power ring to restore himself after the jump and with the central battery in meltdown there was no way he could get the vital recharge he needed.  This was going to be a one way trip and Flodo was only too aware of the risk involved. 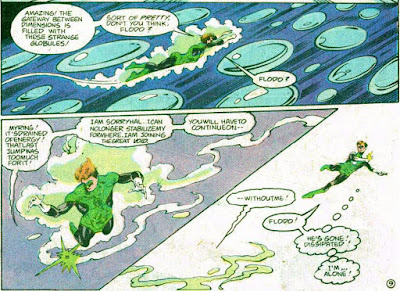 It's strikes me as sad that Hal, a simple passenger on the duo's transdimensional journey, is too busy admiring the wonderous sights around him to realise that his companion has given his last moments to ensuring the Earthman's mission is a successful one.

According to the mythos and every website that has ever passed opinion on the subject in the days since Joey Cavaleri and Gil Kane originally penned our dramatic saga, Flodo is gone. Dissipated means dead.  Steve Englehart was obviously so sad that he quit the book at the end of the previous issue despite a three year unbroken run. I guess he just couldn't stand to see Flodo go.

But I like to think the gaseous hero has not disappeared for good. Instead he is floating around out there.  An infinite number of sentient particles that may some day breach the dimensional border once more and find his way back to Oa to take his place among his brethren and don the power ring he so richly deserves to wear.  For Flodo Span is a being without fear.  He is Green Lantern.