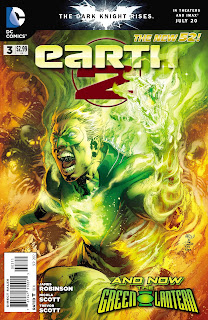 It's taken me a few days to get around to writing this post.  I've spent the last week with a ludicrous grin plastered across my face muttering, "Earth 2... Green Lantern... Sweeeeet!!!"

While it explains perfectly how I feel about the book I don't think it would have made for a very long review.   And there are three images that I HAD to put up so I guess the least I could do is try and find a few words to hang around them.

The book opens with a burnt and broken Alan Scott crawling through train wreckage.   A brilliant green flame springs up in front of him and introduces itself as "All the power of Earth". Now, this isn't a small claim and Alan's interest is rightly piqued when the flame tries to recruit him to be Superman's successor.

With that startling revelation the narrative shifts to Poland where Jay Garrick is confronted by an irrepressibly cool Hawkgirl.   The scene is very well written with the distinct characters of both heroes coming across clearly.  There is a good-natured humour in Jay playing newbie to Hawkgirl's experience.   Not one inch of panel is wasted as Nicola Scott's pencils take in the action from every angle.

The art in Earth 2 #3 deserves special credit.  Alan Scott's scenes are epic, from the full page splash of his first transformation into Green Lantern to the oversize panel where he hoists an entire train carriage above his head.  For the people he rescued he truly is the new Superman.  Then there's the Grey, or the Rot.  This malevolent force sweeps across the Earth killing all plant and animal life in it's path.  Washington DC is overcome with decay in seconds.  Words can't explain how excited I was to see, in the distance at first, the animated corpse of Grundy rising from the ruins of the White House. 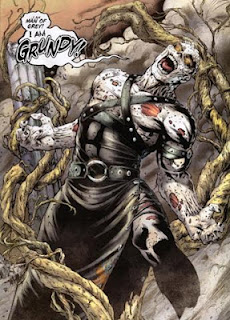 The Green and the Grey are similar to concepts we have seen already on Earth Prime in the DC's New 52 but it wasn't in a Lantern book.  Swamp Thing is an agent of the Green and Animal Man's life has been devastated by the Rot's attempts to corrupt his daughter, herself an avatar of the Red.

Alan's abilities being derived from the Earth separates his mythos from that of the Green Lantern Corps and the Guardians of the Universe.  It reminded me of Stan Lee's Just Imagine: Green Lantern.  Stan's hero was granted powers by the tree of life.  Both this and James Robinson's Earth 2 are making a clear reference to the Golden Age origins of Alan Scott that predate the Corps's science fiction stories of the 1960s by some twenty years.

Robinson continues to impress with his ability to weave a narrative which takes in a whole range of emotions.  In one poignant moment Alan mourns beside a body bag containing his deceased lover, Sam.  That single panel tells a story of its own. I picture Alan pulling Sam's body from the wreckage and having to hide his connection to the dead man from the surrounding witnesses.  His power ring is sculpted from the wedding ring that he was about to propose with as disaster struck.  These sombre memories will not be far from his mind throughout his mission as Green Lantern.

I've already mentioned how funny the Hawkgirl/ Flash exchange is.  It lulls us into a sense of security and intimacy that is shattered terribly with the horror of the  Rot infesting the countryside surrounding them.  The writer does not shy away from the obvious analogy of light and dark.  Green Lantern is Earth 2's shining hope and Grundy is the first inkling of a great darkness that is about to befall this world.

I couldn't be happier with how the issue turned out.  As my twitter time line can attest to, this was the book that I was waiting for all year: Green Lantern's Earth 2 origin.  It was not what I predicted (and believe me, I predicted everything... I had my bases covered).  But it was exactly what I expected in terms of quality.  On Earth 2 the heroes are truly heroic, the villains are villainous in the extreme, and the end of an issue leaves you furiously counting down the days until the next one is released. 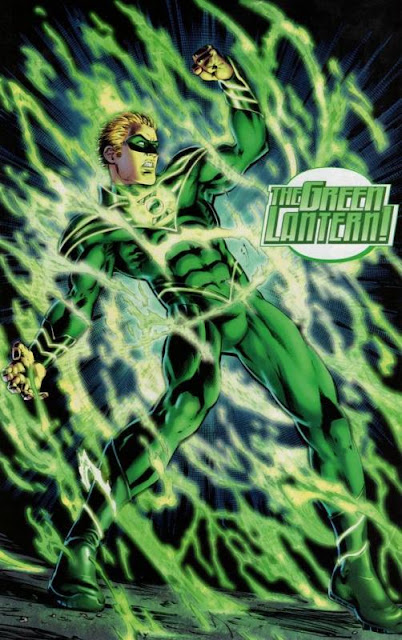