With this issue GL Corps is back to doing what it does best. Balls to the wall action from the very first panel. We ended the last book with Guy Gardner and his squad of rebel lanterns breaking John Stewart out of death row at the Alpha Lantern tower and the Alphas using their enhanced abilities to drain the liberators' ring charge. This month opens with fan favourite Kilowog being smashed to the deck by Alpha Lantern Boodikka. Let's face it, even if you hadn't read the previous issue, when a warrior of Kilowog's standing is taking a major beating you know that the proverbial has already hit the fan! 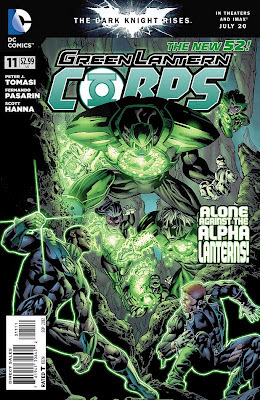 Meanwhile Guy Gardner is apparently ferrying an unconscious John Stewart off-planet to prevent his recapture.  The Alphas try to put Oa in lock-down but a belligerent Salakk refuses to bend the Lantern regulations to satisfy their agenda.  Salakk is my new hero, defiantly wielding the letter of the law with more skill than a dozen GL recruits could sling a ring.  The Guardians follow the action from their Citadel, evidently manipulating both sides to further their own as yet unknown (but blatantly untoward) endgame.  The Alphas catch up to their prey only to discover they have been chasing ring construct decoys of John and Guy and resolve to torture their fellow Corpsmen to ascertain their true location. 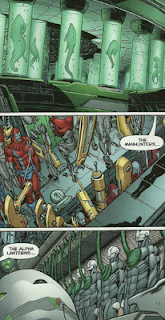 Elsewhere the real John Stewart awakes from his fist induced slumber to give Guy a little payback in the form of a right cross.  Despite appearances, their rough and tumble is more a show of brotherly love between two tough guys than any genuine animosity.  Guy has transported them into the bowels of Oa where the Guardians forge the Corps power rings.  He hopes to find a useful weapon to turn against the Alpha Lanterns.  Suspicions are raised when they discover hundreds of power rings are being held in the forge instead of flying off to induct new Green Lantern recruits.  Further investigation reveals lab after lab of Guardian experiments such as half built Manhunters and souless Alpha Lanterns hanging around like so many Frankenstein's monsters.  We also see semi evolved Psions floating in suspended animation. For a GL geek this is particularly odd as the Psions were created on Maltus years before the Guardians actually adopted Oa as their planetary base. 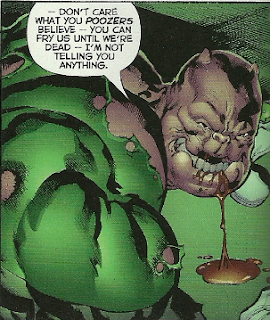 Back at the sciencells Kilowog and his compatriots are being brutalised by their Alpha Lantern captors.  There is a great panel here of a resilient Kilowog, battered and bleeding, refusing to give up any information on John and Guy.  In a book which is chock full of green hues Kilowog's red blood dripping on the sciencells floor is particularly emotive.  Did I mention that 'Wog is my new hero?  Just like the marines, no Lantern is left behind and in two glorious full page splashes Gardner and Stewart come crashing down on the heads of the Alphas to defend their fellow Corpsmen.  Fighting beside them is a perverse army cobbled together from the Guardian's leftovers, Psion bodies with Alpha Lantern heads, Manhunter torso with Psion tails.  Detailed examination of these creations is not for the feint hearted.  And all seemingly powered by Manhunter brains baying for the lives of the Alpha Lanterns.

With the Guardians watching but refusing to act the battle wages on unchecked.  Although initially taken by surprise, the Alphas begin to gain the upper hand.  Pieces of the rag-tag army are scattered across the prison chamber.  Alpha Lantern Varix catches up to John and Guy and throttles them around the neck.  Menwhile in a number of small punchy panels the fallen debris from the experimental army klicks and scurries across the floor much like the T1000 in the second Terminator movie.  In the final splash page a multiheaded behemouth continues to form itself from the destroyed parts and screams for satisfaction against the Alpha Lanterns.

The pace of this book frantic and the abomination that John Stewart and Guy Gardner have created to fight on their behalf is more suited to a horror book the the Green Lantern Corps.  All of this comes together brilliantly to make this a rollercoaster of an issue.  Don't forget to breathe.  As well as this we really get to see how devious the Guardians have become.  If this point hasn't been made clear  across the various Lantern titles previously we are left in no doubt now that the little blue immortals are not nearly as cute as they appear, and are definitely not to be trusted.

It remains to be seen if the Manhunter monster will dispense with the Alpha Lanterns and then turn on the Corps themselves.  I will definitely be back for next issue to find out how this one goes down!