'Tis the season to be jolly...  Of course, when it comes to jovial Green Lanterns, John Stewart isn't the first recruit that pops into our head.  Long-time readers of this blog will be familiar with my particular fondness for Gerard Jones' series Green Lantern: Mosaic.  Lying at the root of this series was the desire to confront poignant issues of the day in a no holds barred free-for-all of ideas and commentary.  All done via the exploration of a patchwork nation of alien species forced together by a mad Guardian.

Traditional concepts were turned on their head so often that the reader's brain began spinning in sympathy.  And yet through all of the chaos Jones managed to elevate the reluctant protector of the Mosaic world to a role that was as much of educator and spiritual guide as it was a policeman.  He held up a code of morality which, ultimately, the reader found they were being measured against too.

So when it came to the celebration of Christmas in Mosaic #9 it should come as no surprise that our traditional Christmas story has been given a uniquely John Stewart revamp. 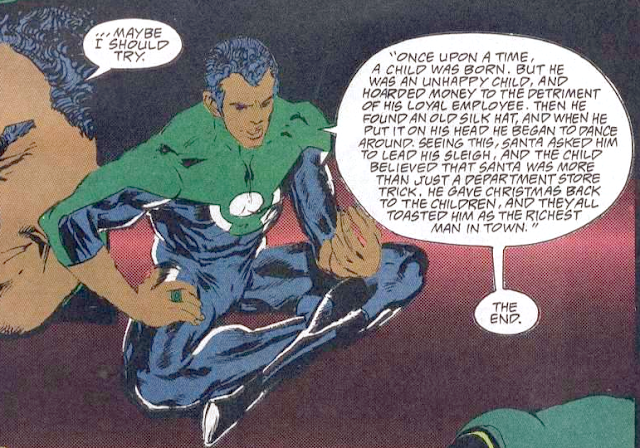 Like most things on the Mosaic answers don't come easy and certainly aren't straightforward.  This isn't a cheeseball story where the Justice League put on Santa hats and save an orphanage.  But the meaning is there and it is powerful.  It reminds us how important loved ones are and why, no matter what we practice in our own spiritual life, we need to take time to experience joy in the company of one another.
A lesson for our times... 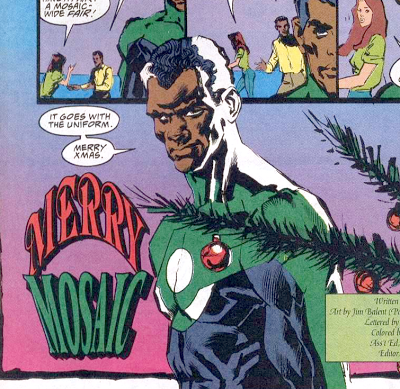