Happy Rebirthday! (The First Day of the Rest of my Life) 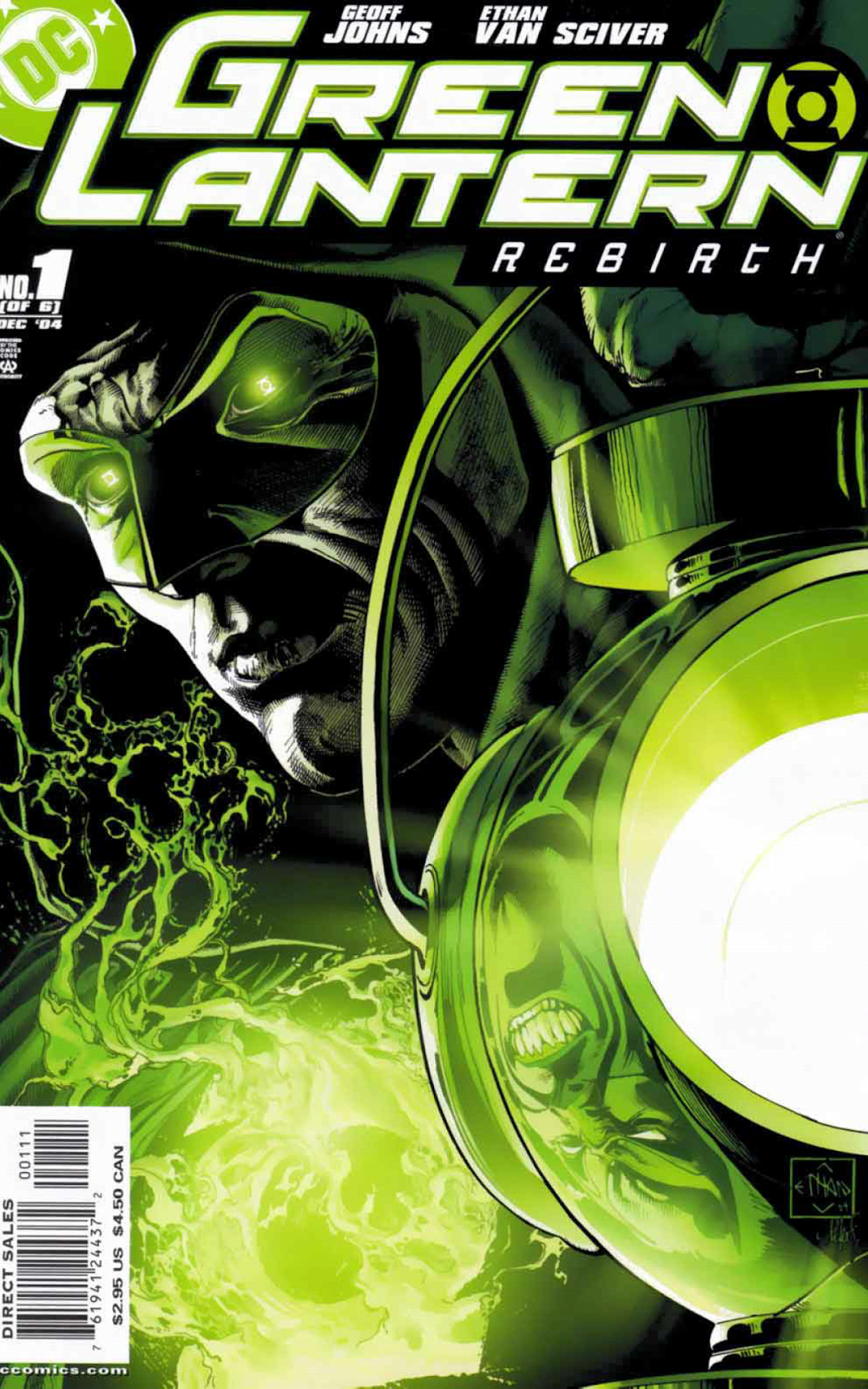 27 October 2004.  Although I didn’t realise it at the time, this date heralded the biggest world changing event in my life outside of my wedding day and the births of my children.  For it was on this day that DC Comics released Green Lantern: Rebirth #1, the first issue in a six issue story recounting Hal Jordan’s return to the role of Green Lantern. My life and the long-suffering patience of my family can be divided into two parts – ‘Before Rebirth’ and ‘After Rebirth’.  Before Rebirth I was a young twenty something with a wide range of hobbies and interests, one of which happened to be reading comics.  In fact, I enjoying reading standard text novels far more and I got a lot of my superhero fix from reading novelizations of comic book stories such as Death of Superman.  If anyone asked, my favourite heroes where Batman and Punisher “because those guys were dark and they didn’t need superpowers to get the job done”.  Then Geoff Johns and Ethan Van Sciver came along and nonchalantly tossed a phenomenon right there in my lap.  From that moment forwards I have been an obsessive.  Obsessed with comic books in general, and more importantly, obsessed with all things Green Lantern.  Check out some of the other posts on this blog if you don’t believe me! 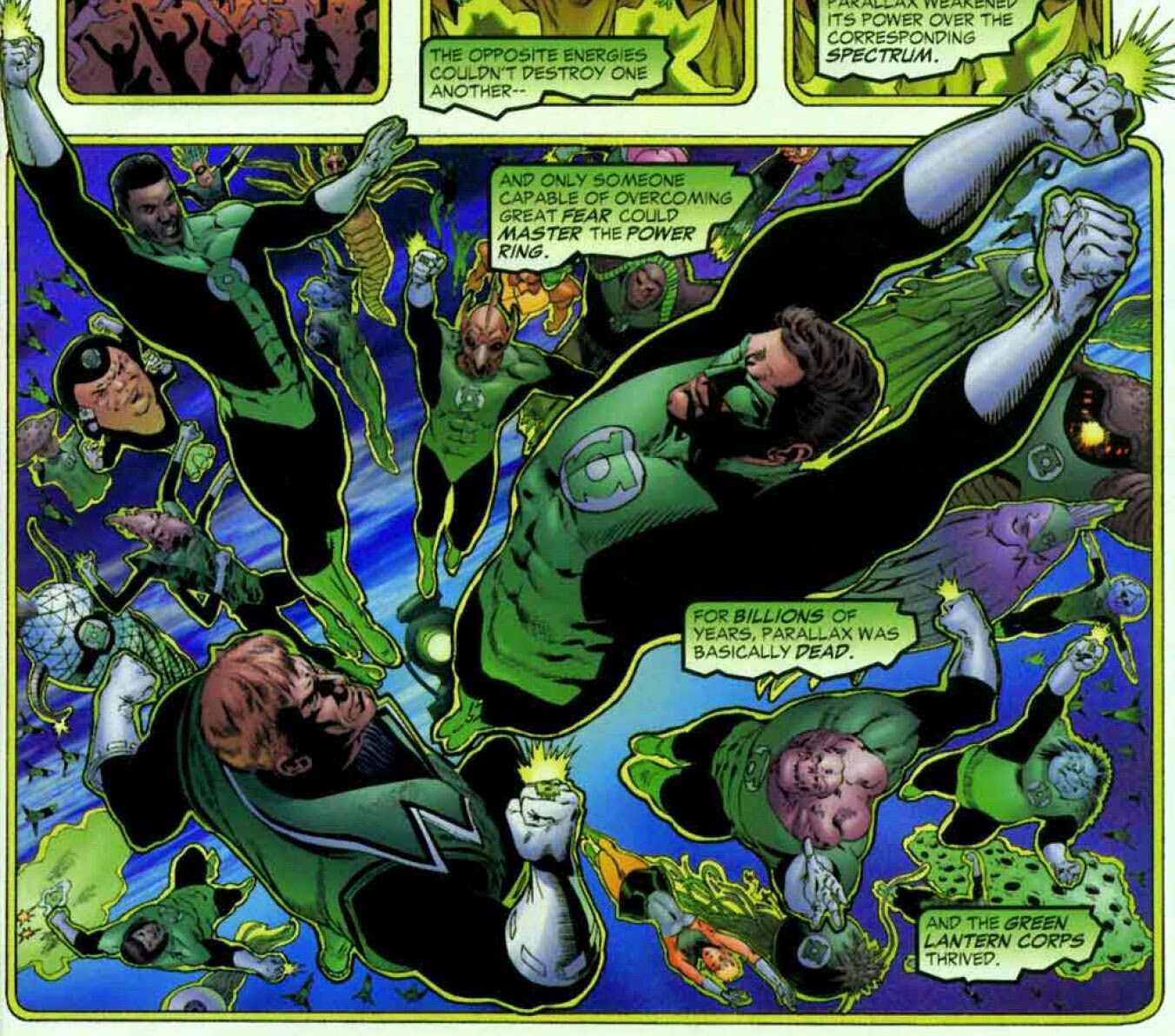 The funny thing is, Hal Jordan isn’t even my favourite Green Lantern.   He isn’t even my favourite Green Lantern from Earth (that honour goes to John Stewart), or indeed my second favourite (Kyle Rayner).  But the book itself unleashed something within me that cannot be quelled or sedated.  I’m not going to try and tell you the story contained with the pages of Green Lantern: Rebirth.  I know my fellow GL blogger Myron Rumsey of The Blog of Oa intends to publish a celebratory post today as well.  Myron is a die-hard Hal fan and I admire his writing and his blog very much and expect he has provided an exceptional recap of the book that I can piggyback on.  So stop, go read his post and make sure you come back here when you are finished.  Ok then… welcome back. What I do want to tell you about is why Rebirth lit the touch paper within me that quickly became an everlasting green flame.  First I have to tackle the art.  When it comes to getting under the skin of Green Lantern, Ethan Van Sciver is untouchable.  There are actually a few artists out there who I probably like more, Ivan Reis being one of them.  But Reis nor anybody else could have done justice to this book like Van Sciver did.  I can imagine Geoff Johns’ receiving his artist’s pages through the mail and thinking “Wow, I kind of thought I knew what I was trying to say here but Ethan just nailed it better than I had even imagined possible”.  Let me home in on one specific concept to demonstrate what I mean.   With Hal back in the green there are now four Green Lanterns from Earth.  In another creative team’s hands they could all be said to wield the same power – ring energy is ring energy, right?  No.  As Johns tells us, each Lantern’s power is influenced and enhanced by his own personality.  It is all very well to write this in a script but Van Sciver went to town on the concept and brought it to life in a way that I think has not been replicated since.  John Stewart is an architect, a designer, he builds his constructs in minute detail.  Guy Gardner is a wild force and his constructs burn and flare just as he does.  Without even reading the narrative textboxes we already know from the art alone how each GL thinks.  What fuels them.  How they look at the world.  To capture that emotion in such a unique way is, I think, one reason why Rebirth should be considered some of the best art that comic books have to offer. 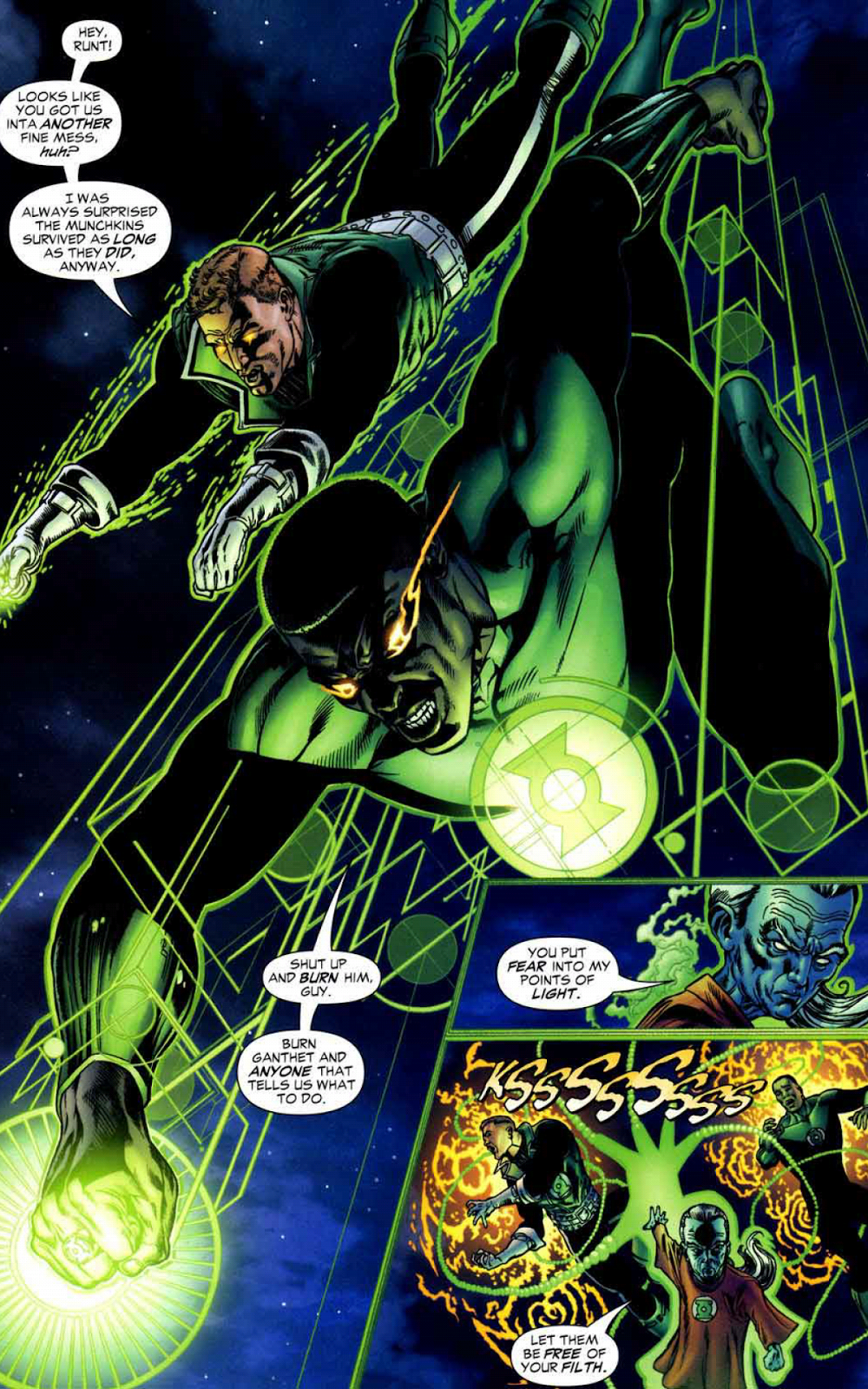 And if that weren’t enough there is always this… 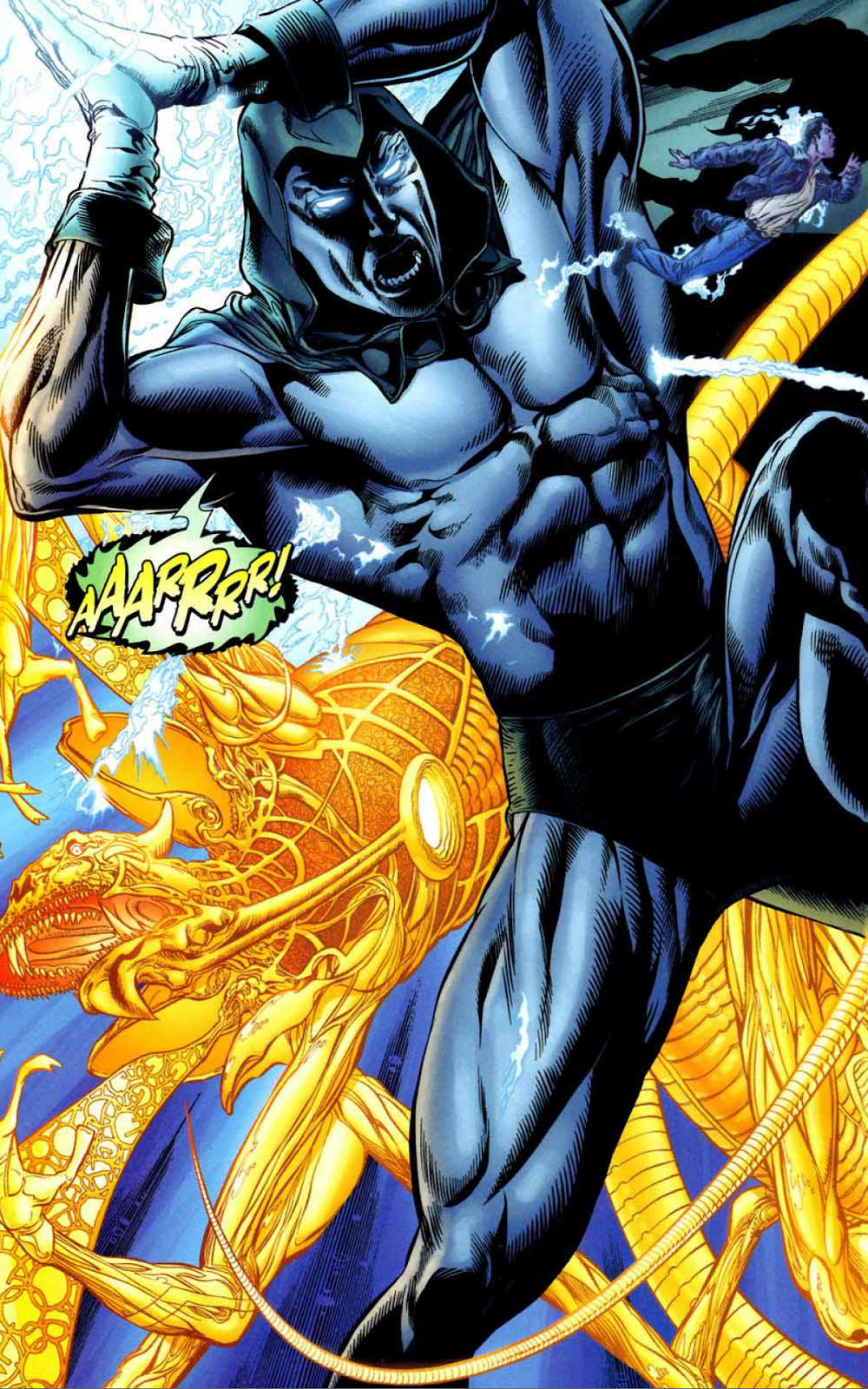 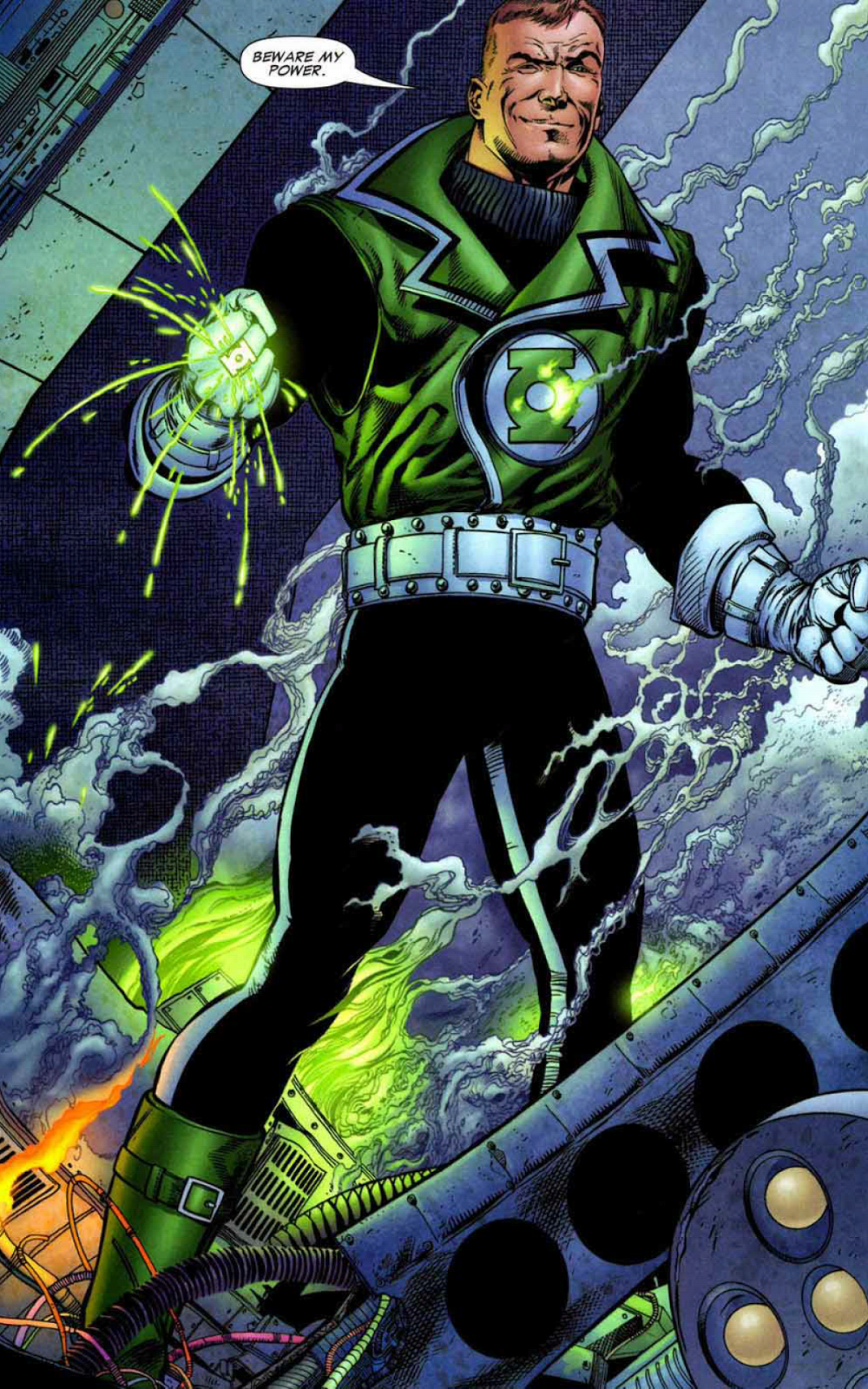 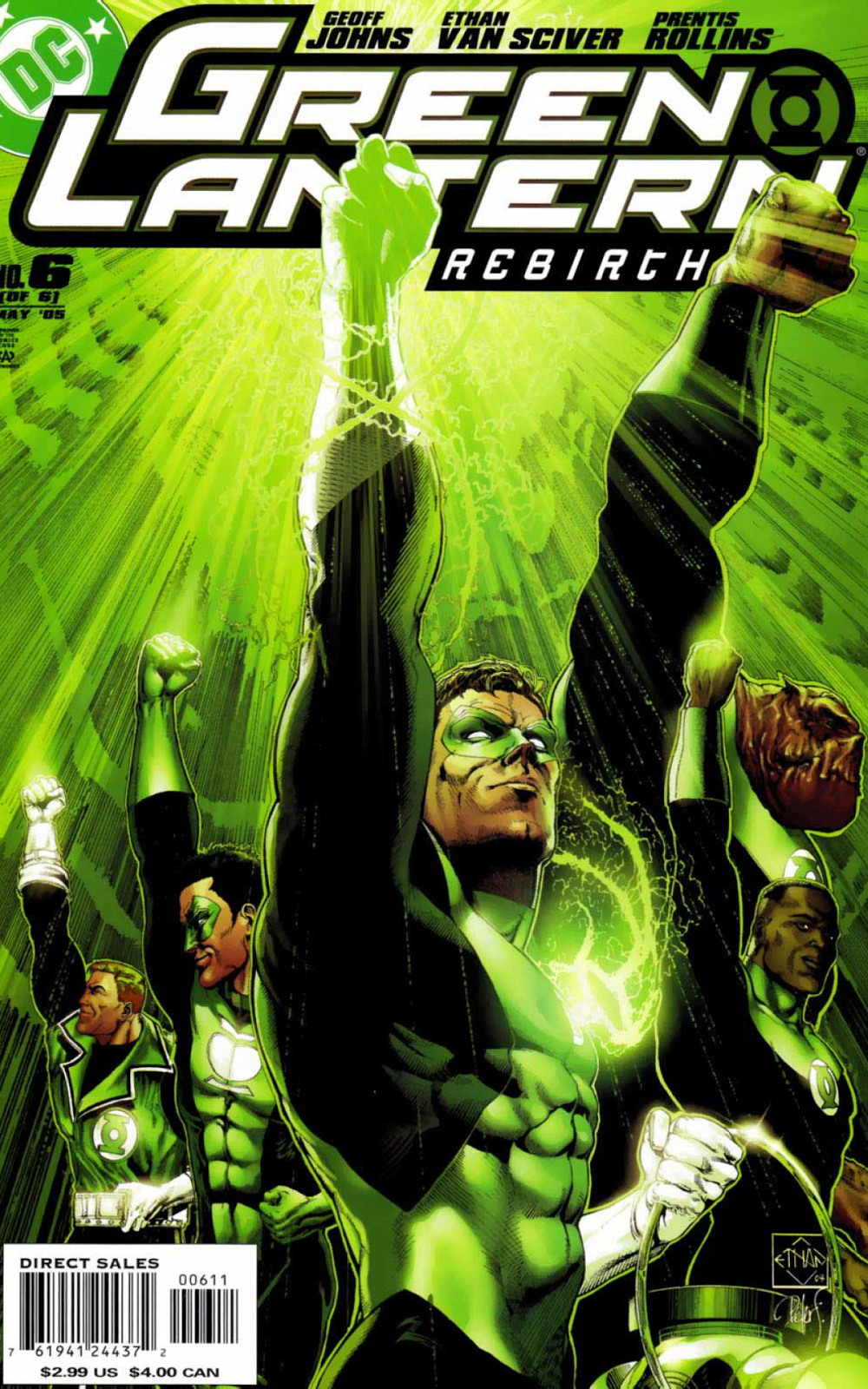 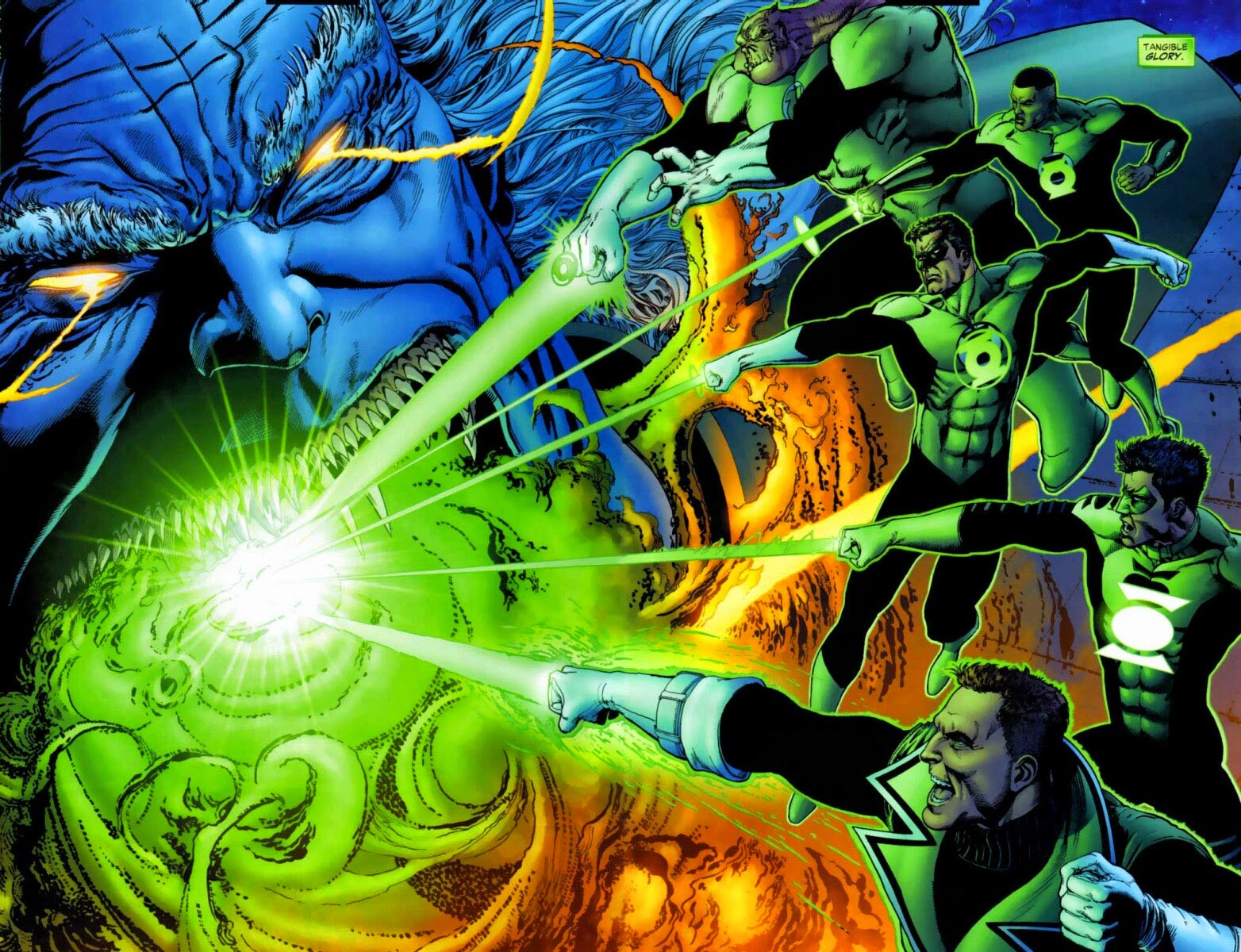 So that’s the art.  But, let’s face it, Green Lantern: Rebirth would not exist at all if it were not for the brilliant and unusual mind of Geoff Johns.  My obsession is entirely borne out this writer’s own obsession.  He opened me up to a history that I had never really considered before.  I started reading Green Lantern on and off through the Kyle Rayner era.  Kyle was my guy, he was young and essentially cool but with a touch of the Peter Parkers about him.  I was well aware that he was the latest in a long legacy but I didn’t really give it much thought.  With Johns arrival on the book I could think of nothing else.  I know it has been said elsewhere but it should not be underestimated the risk that Geoff Johns took when he brought Hal back.  He could have gone down the traditional comic book route of retconning all that came before out of existence.  He didn’t.  Johns took every bit of mythology from every era of GL.  Golden-Age, Silver-Age, Bronze-Age, Modern-Age.  He took them all and threw them all into the mixing pot.  He gave it a stir, blended the ingredients together a little, and poured out the glorious creation that is Green Lantern: Rebirth.  And not only did he manage to hold on to the essence of the last 60 odd years of the character’s portrayal in comics and bring back the most famous iteration of said character in a move that many thought was impossible; hindsight shows that he also sewed the seeds for the next ten years of his unrivalled story-telling.  Wonderful stories like The Sinestro Corps War and Blackest Night have their origins right here in Rebirth. 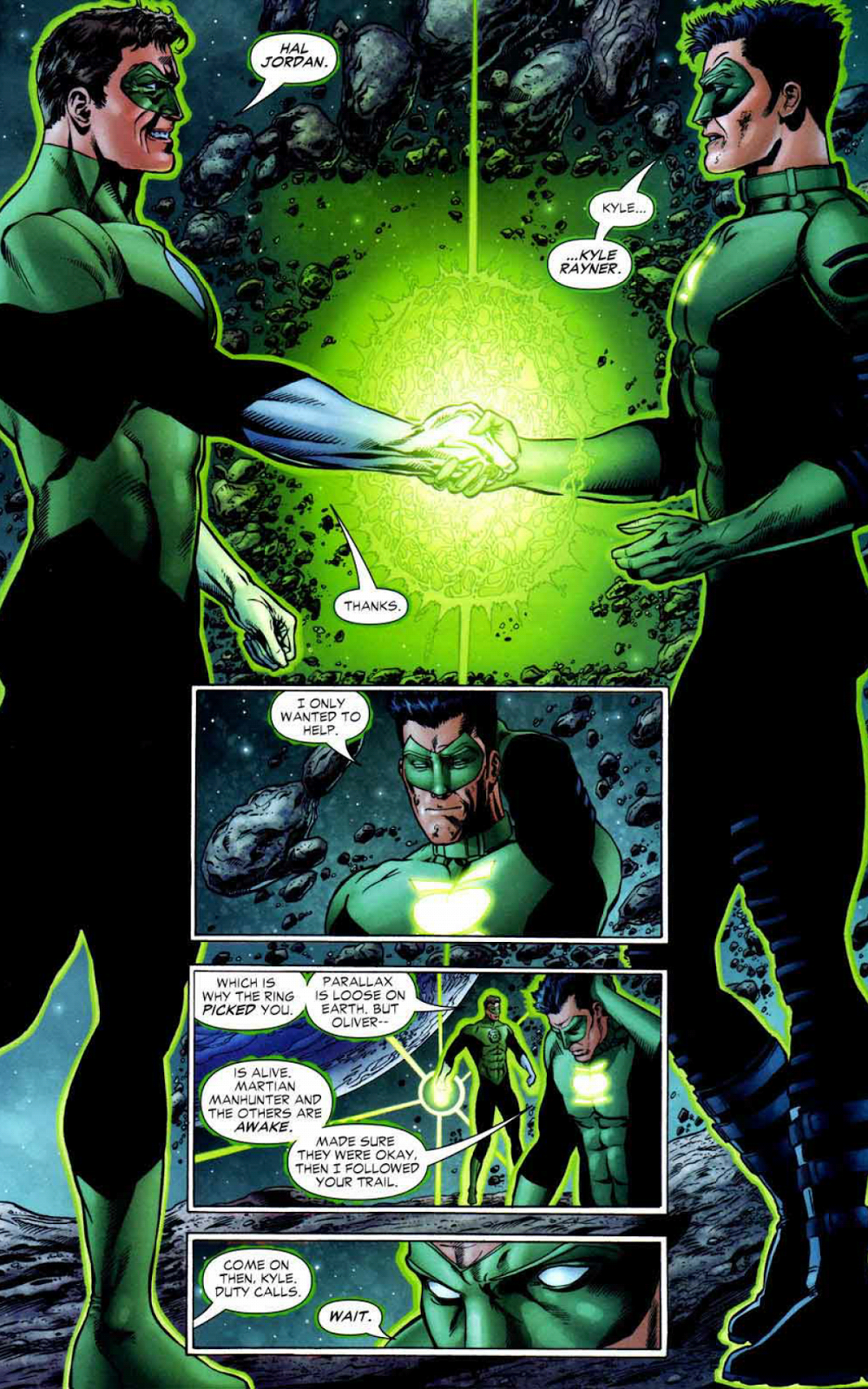 I’ve written other blogs about how much I like to scrutinise both the real and imagined history of Green Lantern.  It appeals to the geek in me.  Is there a hardcore comic book fan that doesn’t spend hours deliberating over continuity and who begat who, killed who and brought who and who back to life?  It was Johns that opened my eyes to the endless possibilities that Green Lantern mythos contained for just this activity.  Sure I’d read quite a bit of Kyle’s run and had come across Hal and the rest here and there, mostly via Justice League but I hadn’t sat down and blown my mind with a billion years of continuity.  And I hadn’t respected how much ground Hal Jordan and the Green Lantern Corps had covered, even in the last twenty or thirty years, until Geoff Johns tied it all up in to one neat little package for me. 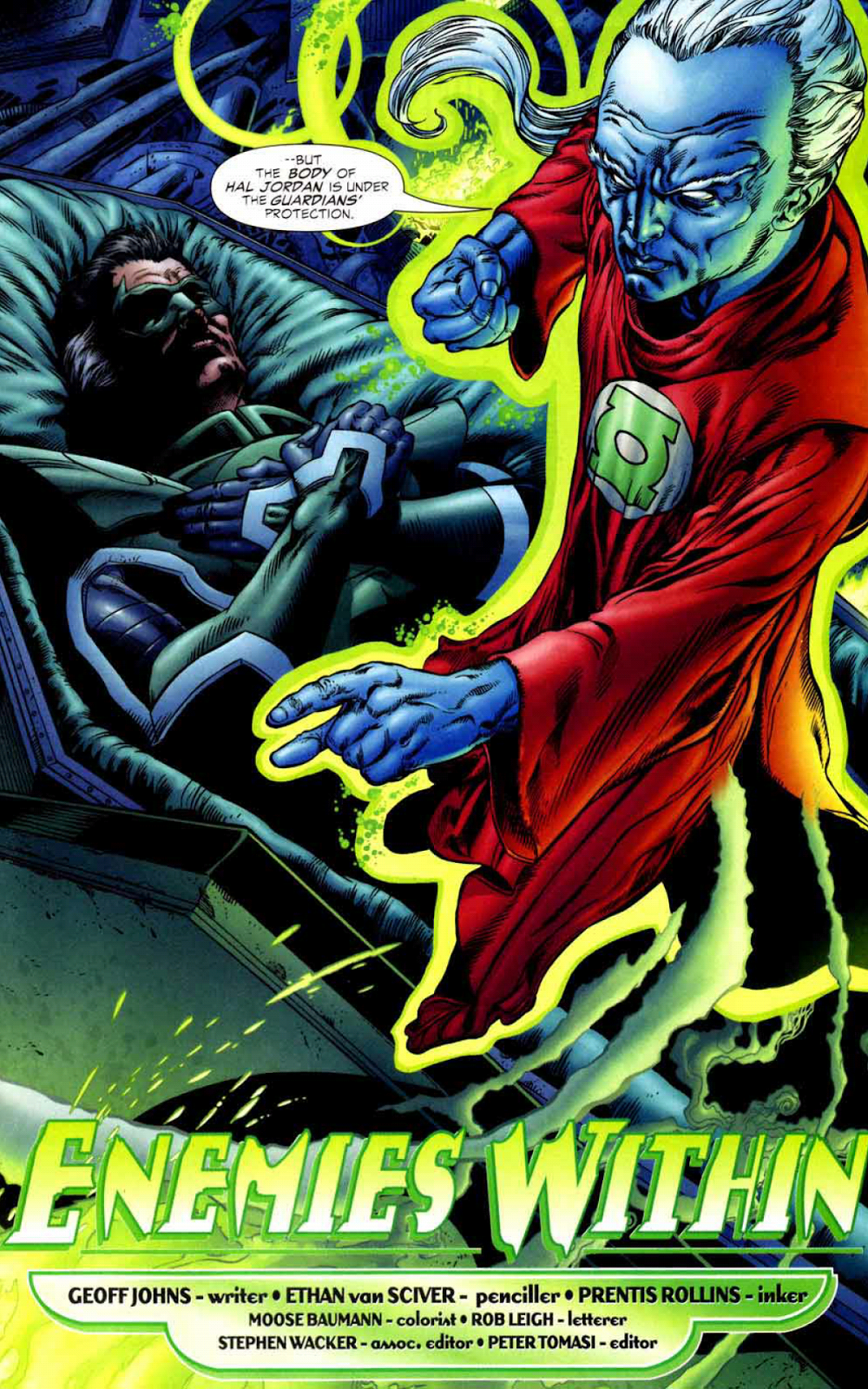 So that’s the history bit.  Green Lantern: Rebirth has it in spades and I love it.  But that’s not the main attraction.  The real reason I hold Rebirth as one of the finest comic books ever written is the feeling it gives me every time I read it.  The characters contained within these pages are the very definition of ‘superhero’.  In the face of the untold adversity they stand tall.  In the shadow of evil they burn brightly.  In the space of these six issues the Green Lanterns come together to combat two of the greatest enemies they have ever had to contend with, namely Parallax and Sinestro.  They show valour akin to knights of old.  Strength worthy of ancient Greek titans.  Ferocity reminiscent of Viking warriors.  And an unswayable determination matched only by mighty modern champion himself, Superman.  In short, the heroes of GL:Rebirth  are truly the stuff of legend.  And let me assure you, as if there was any doubt, the bad guys get well and truly beaten! There are a dozens of scenes I could point to illustrate my meaning more clearly.  Hal Jordan battling for his soul against Parallax and Spectre at the same time as both entities fought to possess him will always stick out in my mind.  Green Arrow donning a power ring and mustering all of his will to construct a single arrow of green energy and drive it into the chest of Sinestro is another.  And if my respect for Green Arrow was raised measurably through this act, my respect for Green Lanterns and the effort it takes to use the ring every day was raised a thousand fold.  Guy Gardner purging his Vuldarian DNA.  John Stewart standing up for his beliefs against a disapproving Justice League and taking down the aforementioned Superman with a pinpoint accurate beam of energy.  The list goes on and on. 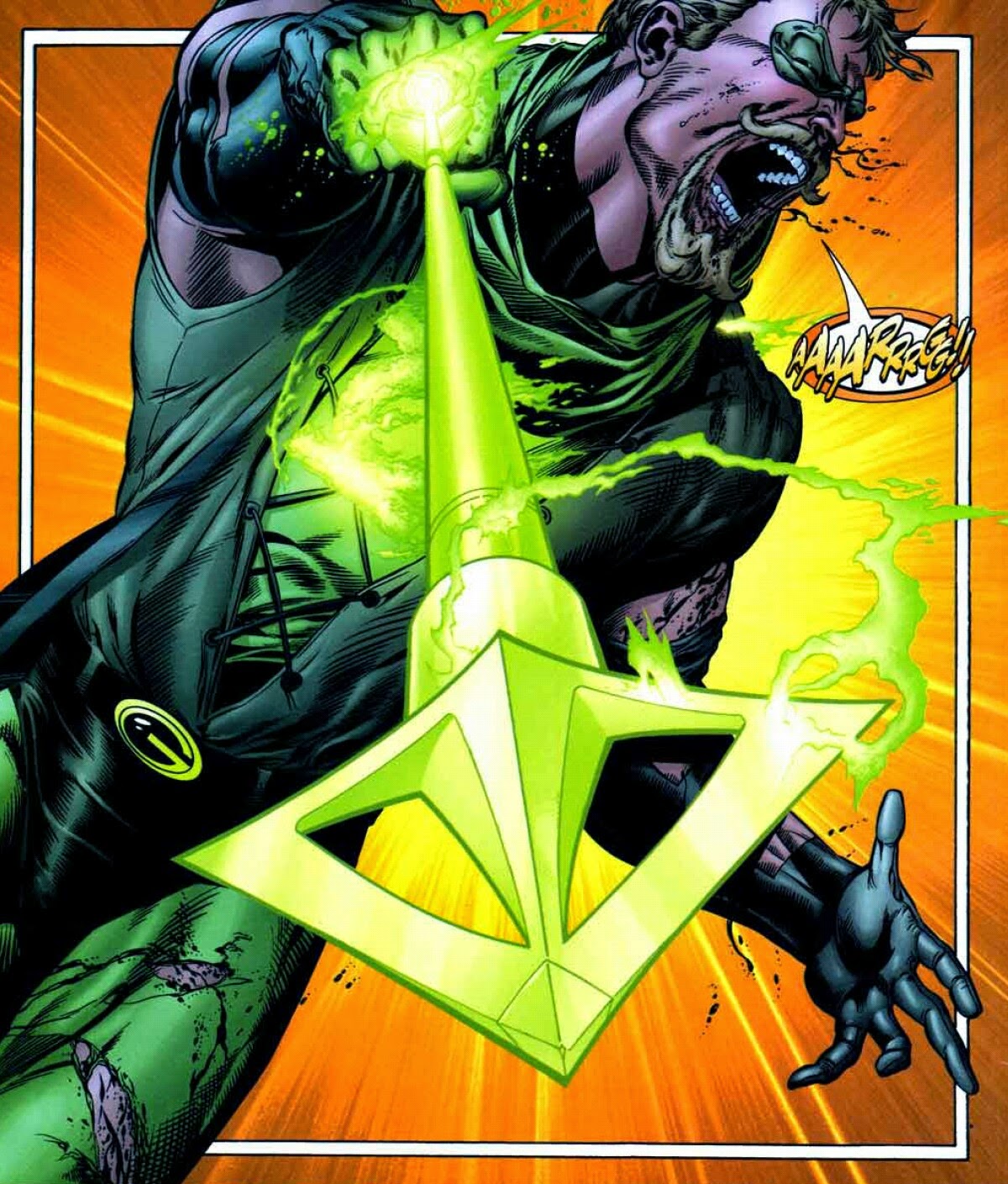 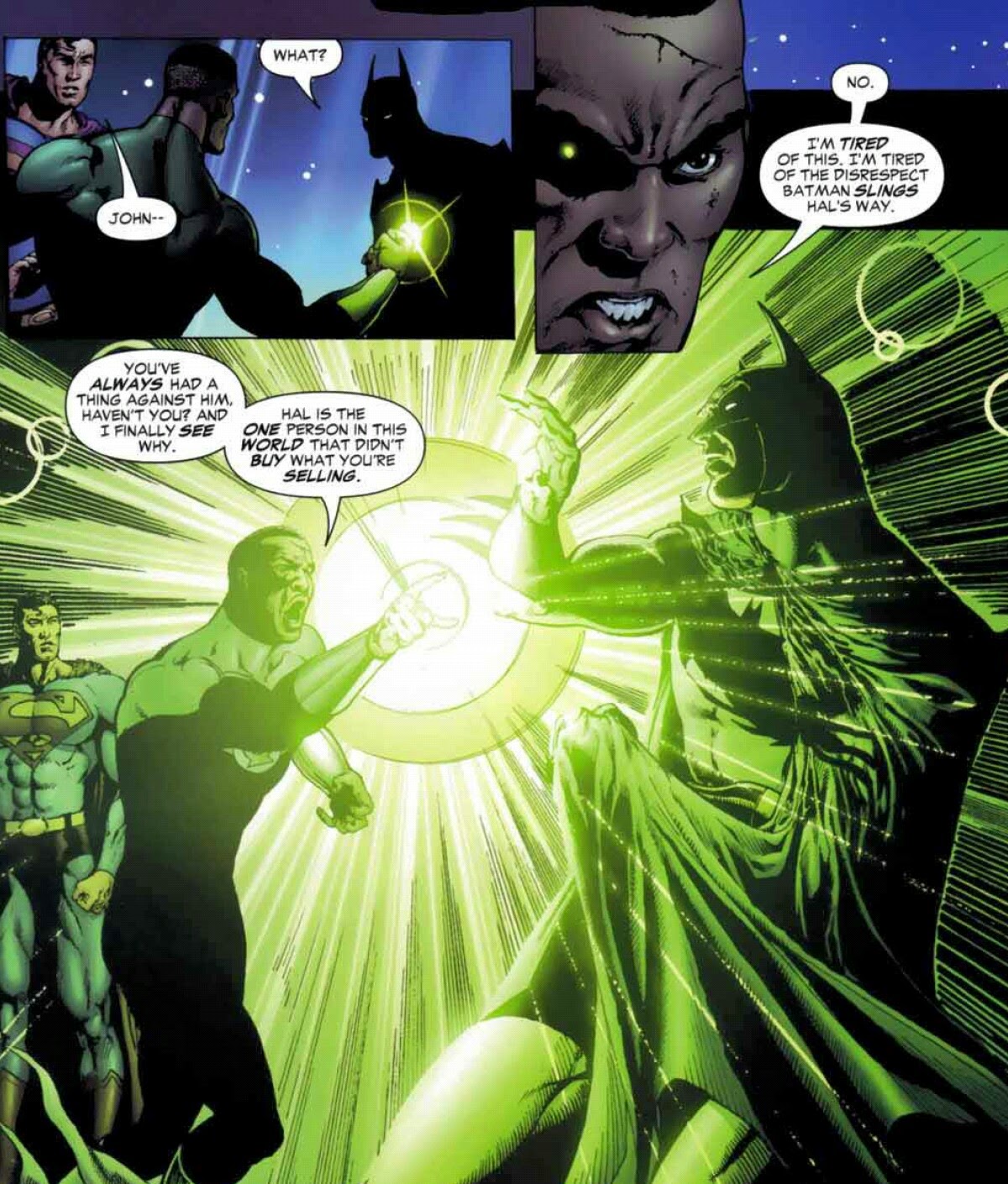 As well as establishing the individual traits that make each character remarkable, all of these vignettes share a common subtext which can be boiled down to two words, ‘The Corps’.  This was a concept that had been essentially missing from all the Green Lantern titles I had read in recent years.  I’d read team books like Justice League, or the more nurturing Teen Titans.  I’d followed team-ups and crossovers were allies band together against a mutual foe.  But I had never read a book that stirred within me a sense of unity like I experienced reading Rebirth.  This was something I wanted to be a part of and to read more of.  Geoff Johns understood that Green Lanterns aren’t just a legacy of characters sharing the same name.  For all of their differences they are bound as closely as any blood-tie.  And together they will face down anybody.  His Lanterns don’t reel off their oath in secret, charging their rings in some hidden broom cupboard.  They roar it proudly in the field of battle, standing side by side with their fellow Corpsmen and revelling in the association.  “Beware our power…” 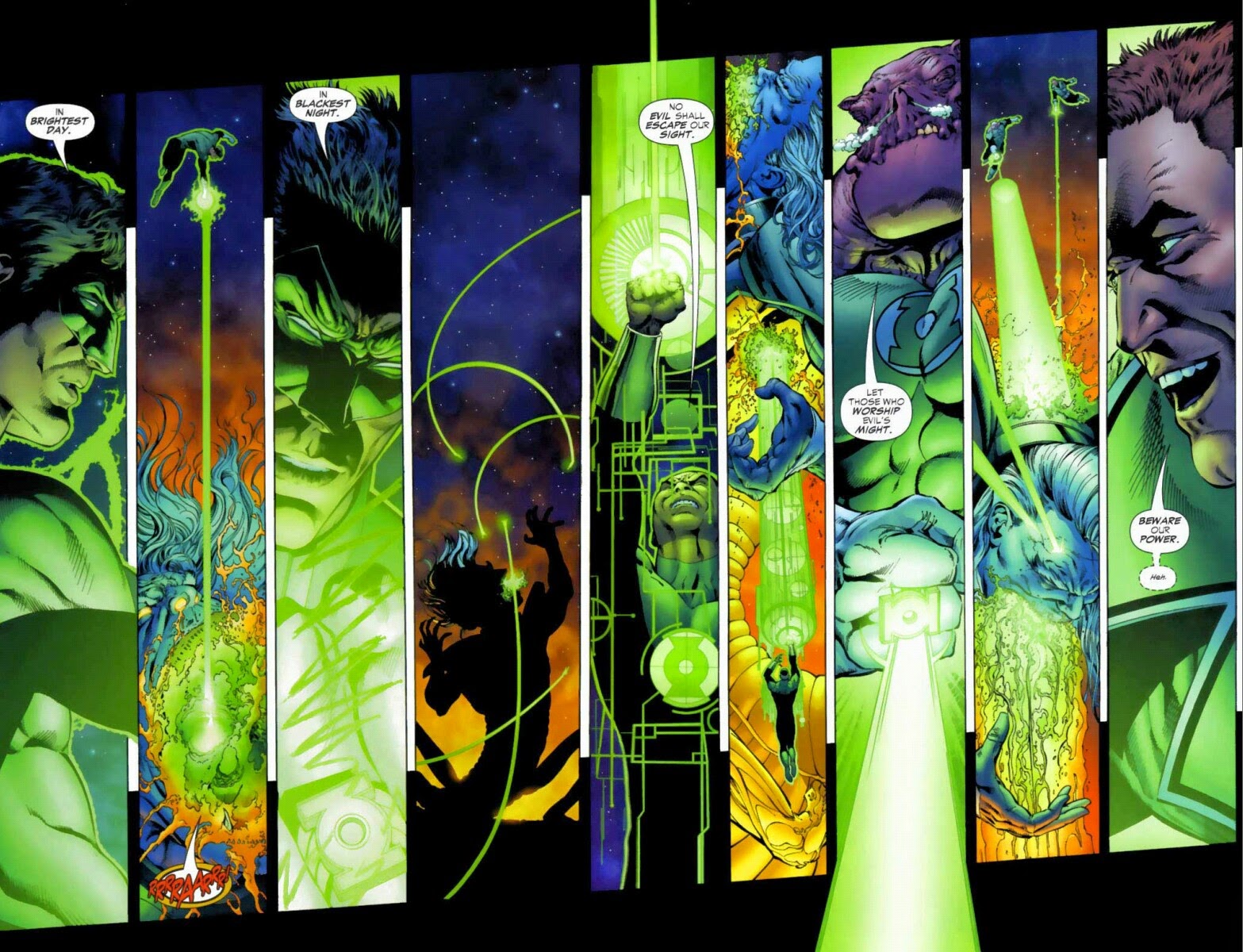 Frankly, I’ll never look back.  Hundreds of unwritten issues awaited me.  Hours of trawling back-issue bins.  Literally thousands of pounds of hardcovers, trade papers backs, variant covers, T-Shirts, prints, cups, caps, figures, belt buckles and DVDs featured in my newly discovered life. …And one crazy little blog that I am pretty damn proud of!   On 27 October 2004 a bright green light was switched on and it has been shining over my universe ever since. 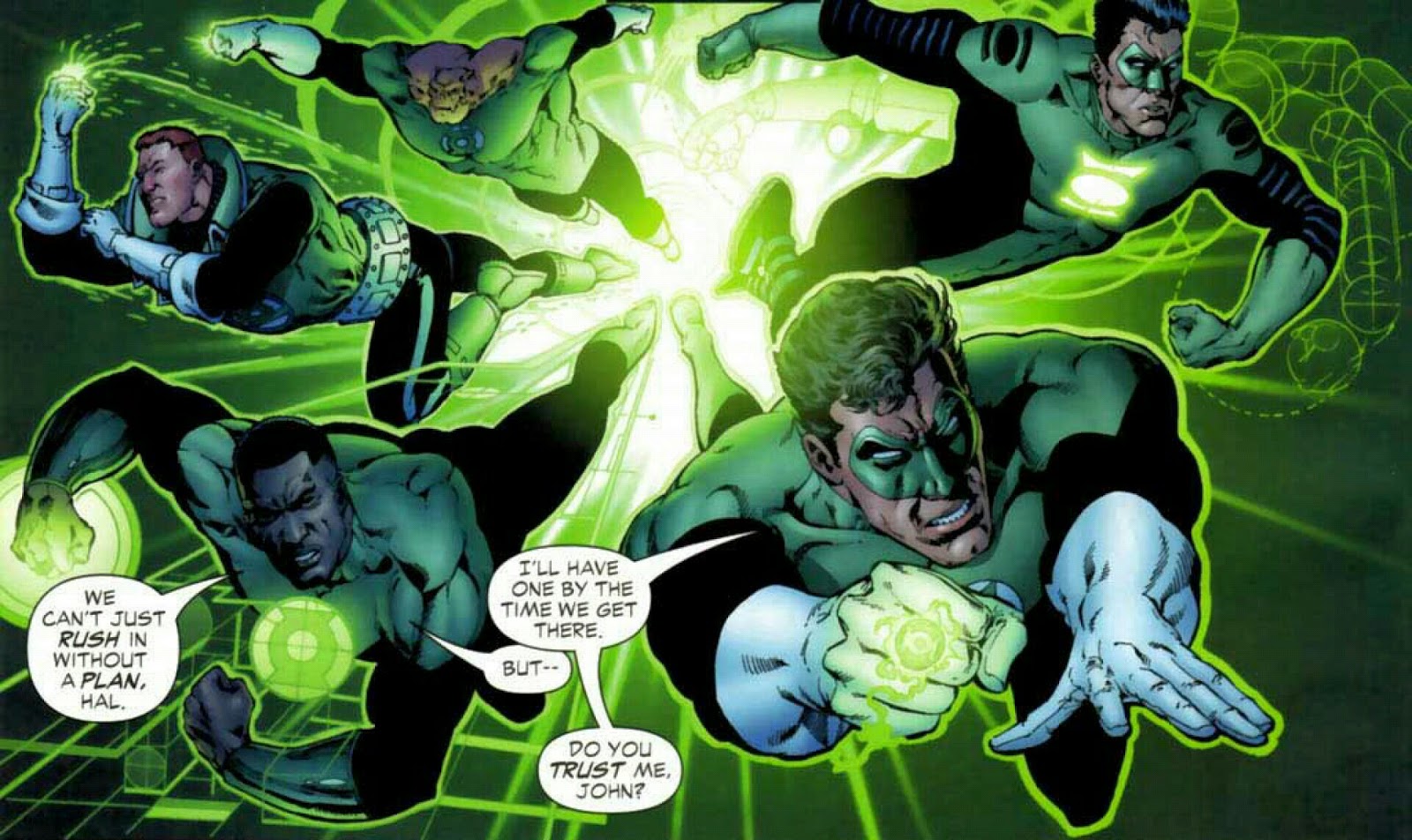 Oh, and that guy Batman I professed to love so much, the dark shadow of superhero comics?  Well… 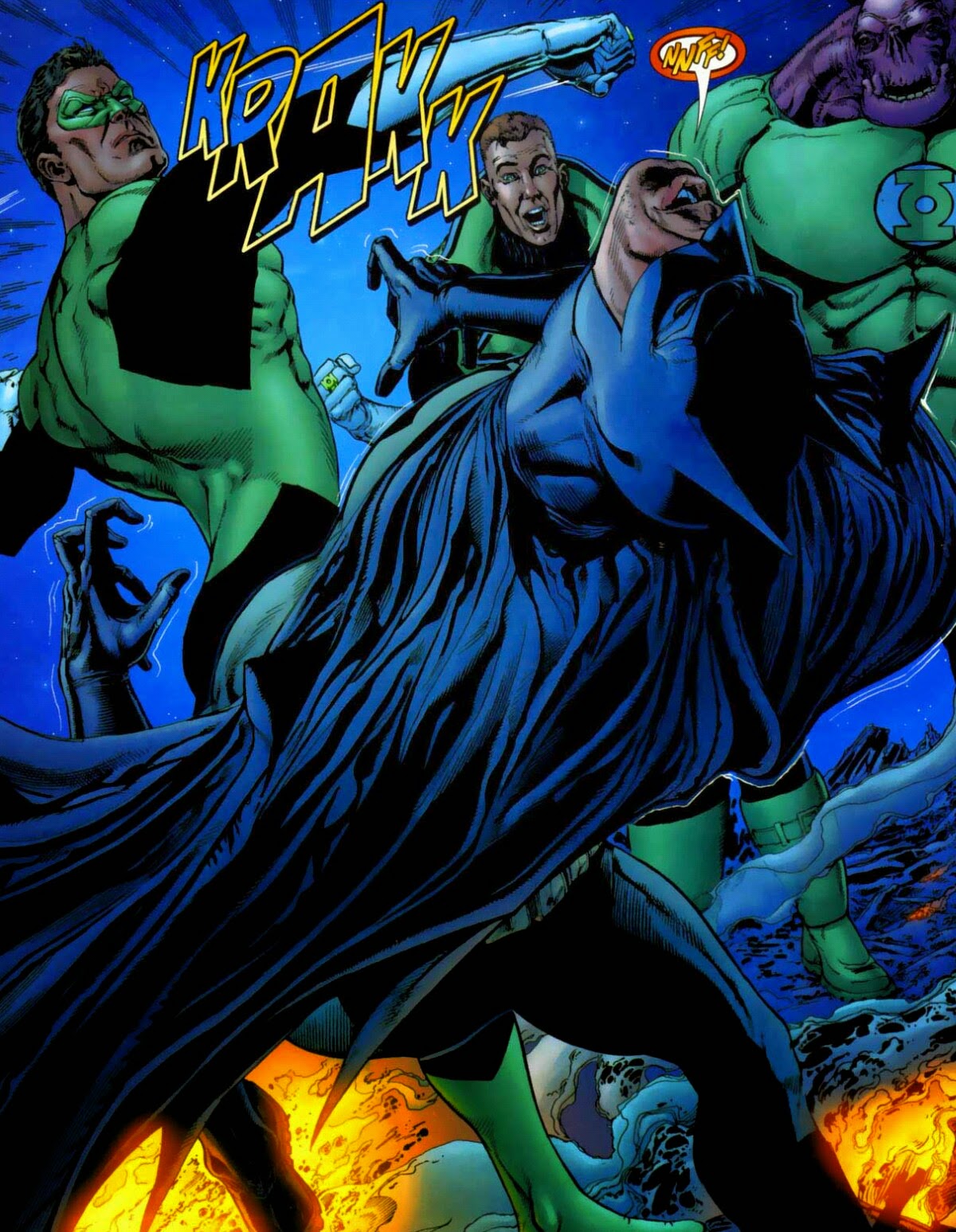 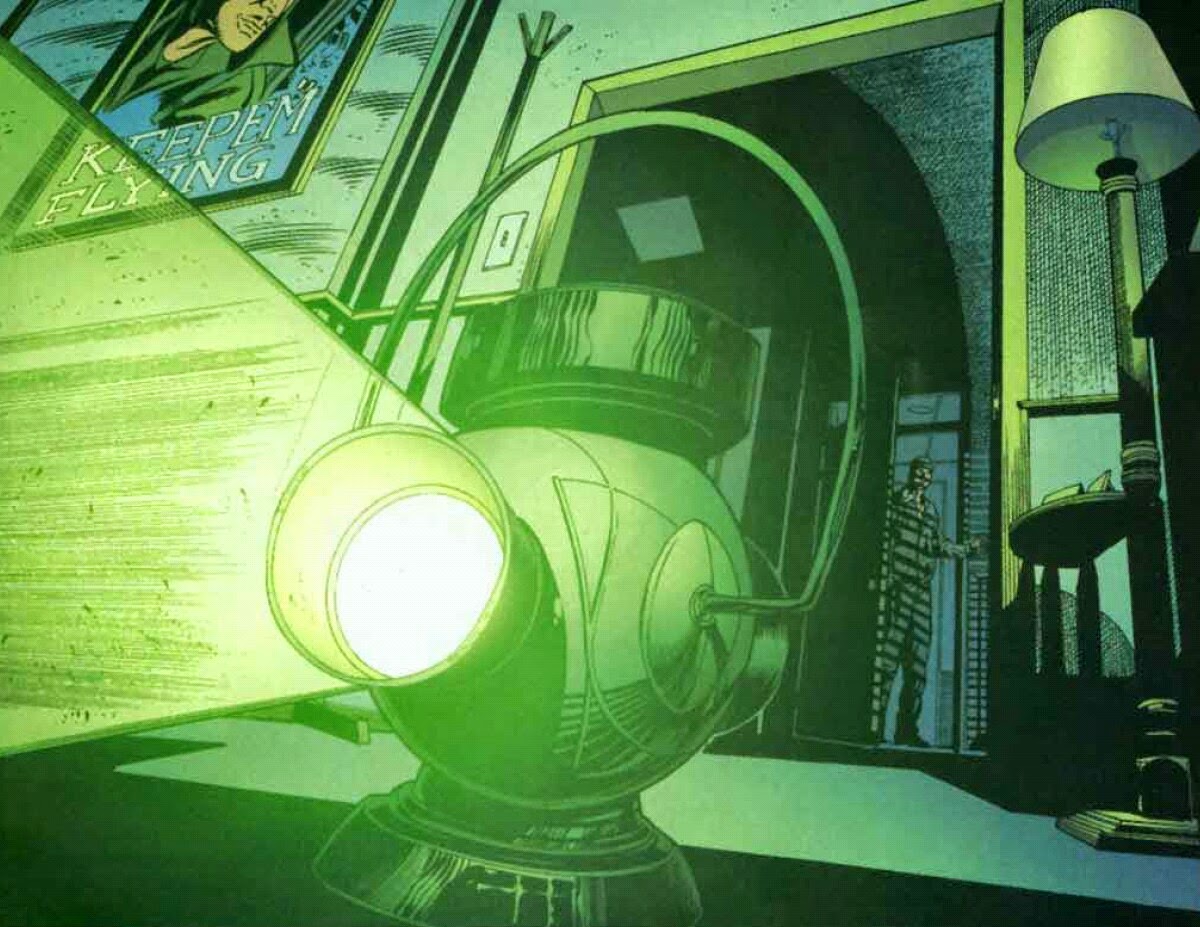