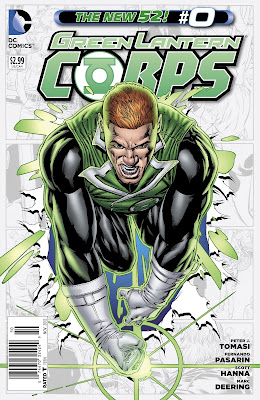 The zero month edition of the Green Lantern Corps centres round the origin of Lantern 2814.2, Guy Gardner.  Through two interweaving flashbacks we learn how Guy received his power ring and of his time as a rookie GL.  Up until now Geoff Johns and his fellow creators of the Green Lantern universe have been fairly respectful of all that has come before.  Everything prior to Rebirth basically happened.  Finally with GLC #0 Peter Tomasi is permitted to do a bit of housekeeping and gives some of the more cluttered lantern history a New 52 facelift.

There are a few nods to the original backstory.  His father remains an alcoholic who gave more of his attention to Guy’s brother, a sibling who goes on to join the police force.  But these mainstays are in the minority and some of the changes are pretty emphatic.  In keeping with the recent redesign of the Corps’ deployment Guy has been upgraded from the Hal Jordan’s holiday cover to his bona fide partner as one of pair of lanterns recruited from each sector.  He trained as a rookie and earned his ring through an extraordinary show of will in the heat of battle.  His CV has been completely rewritten to that of a dishonourably discharged police officer. Where Tomasi et al have done extremely well is in capturing the spirit of Guy Gardner while creating a frame of reference that is much more palatable.  The noble drugs councillor is present in our new Guy’s desire to serve and protect both as a cop and a GL.  The ‘smash heads and ask questions later’ Guy of later years that made him hated by friend and enemy alike is also apparent.  The hot temper that has him destroy his father’s possessions also sees him roar through a pack of armed gangsters on a motorcycle to rescue his injured brother.  And it is the same temper that he converts to willpower to blast away a conquering alien who had slaughtered all of his fellow rookies.  The beam extends not from his ring as you would expect but from his whole body in one massive exploding charge.
At the end of the book as Guy is inducted at a full member of the Corps he cracks his usual sardonic appraisal of the Guardians.  With typical disregard he redesigns the lantern costume to reflect his own peculiar fashion tastes.  In The New 52 timeline this is probably the first instance of a GL stamping his own style on the uniform, a practice that is now widespread among members of the GL Corps.  In the last panels he is introduced to his new sector partner, Hal Jordan, and I had to give a little chuckle of recognition.  Despite the change in status, their former boisterous red blooded rivalry is portrayed from the offset.  Kilowog’s final disapproving grunt sums up the mood perfectly.