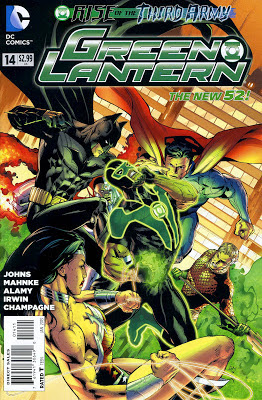  In common with many of my fellow comic book fans I can find myself worrying about every aspect of my treasured hobby.  Generally, of course, the object of my concern is something as trivial as the existence or not of Power Girl’s ‘boob window’ or the headache that is the Robin timeline in the compressed New 52 continuity.  But just occasionally I manage to raise my nose from the weekly pull pile just long enough to notice that the global economy continues to go through uncertain times.  It makes me wonder if I am justified in spending so much of my hard earned cash on comics, some of which will be read once and relegated to a long box for all eternity.  The question I have to ask myself is, “Am I really getting value for money?”  It’s not news that publishers have already tried every trick in the book to keep our favourite monthly titles competitively priced.  For DC that means keeping the page count for a $2.99 comic to 20 pages. Even those who are lucky enough to enjoy a discounted delivery or digital service can’t help but feel ripped off when they sail through their latest purchase in 5 minutes flat.
So let me assure you at the outset that this is not the case with Green Lantern #14.  The issue has plenty of bang for your buck.  Action and plot are squeezed into every panel of these 20 pages, and even with both a full page and double page splash I came away feeling that I’d absorbed more content in this one issue than some other titles provide across a whole arc.
Multiple storylines from the previous few months are picked up and progressed with equal prominence.  The book opens on Oa where the Guardians plot the demise of the Green Lantern Corps and then the entire Universe.  As well as acting as a recap it serves to underline the singular ruthlessness with which the Guardians have set about their devious mission.  One panel reminds us of the Third Army’s violent recruitment tactics.  Unlike the previous four issues of the ‘Rise of the Third Army’ crossover, this is the one of the few glimpses you get of the Thirdites in action.  There has been a nice build of tension in the event so far.  With each week that passed we were further submerged in the inevitability of the Army’s pestilent victory.  That said, I’m glad of the break.  The army are a very quiet lot (having no mouths of course) so there’s no interplay with their prey to break proceedings up a little. 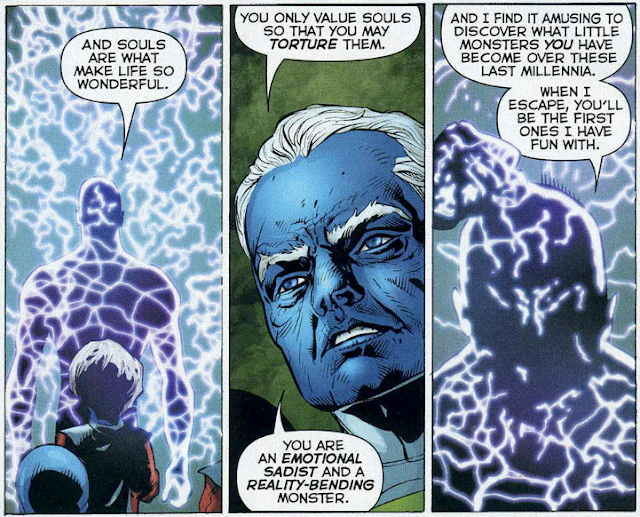 The tone of GL #14 is a very different beast.  The Guardians still have the First Lantern held prisoner but they don’t seem to be able to do much except contain him.  He is able to talk freely to them of the revenge he will take on their souls when he escapes.  Geoff Johns and Doug Mahnke conspire to keep the mystery of the First Lantern’s identity intact with shaded features and tantalising dialogue that could as easily with peppered with red herrings as genuine clues.  The GL fans I have been speaking with on twitter have been scratching their heads and throwing up all kinds of whacky suggestions.  My own ‘theory of the week’ has moved on from a time-displaced future Kyle Rayner to Sodom Yat in a scenario where the end of the universe came round in a circle and joined up with the beginning of the universe again.  The Last Lantern becomes the First Lantern. Well… it is only a theory!

As our introduction to Baz continues I find increasingly that I am drawn to the character.  He displays a noble spirit putting the safety of others before his own. Also, in his confrontation with the Justice League he shows a humility that is admirable.  Baz is quick to admit that he is woefully outclassed in the firepower stakes by Superman and the other Leaguers.  This leads to a humorous tribute to Hal Jordan.  When Baz comments, “Maybe I could to take Batman”, the Dark Knight retorts, “He’s a Green Lantern all right!” …Ba-doom-boom-tish! 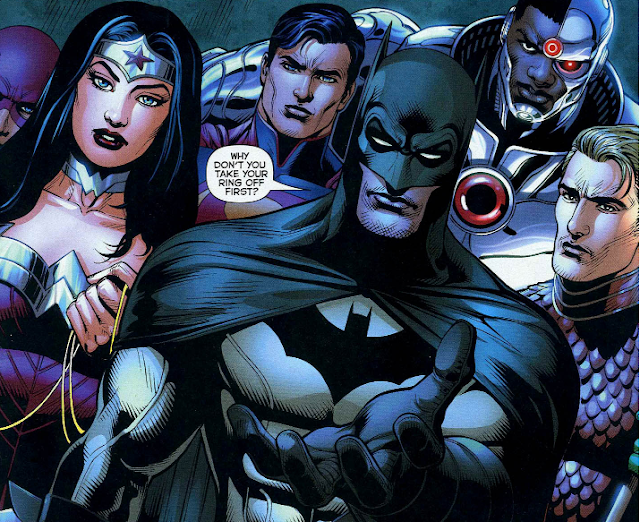 The art is superb in this book and it is as much due to the inks and colours as Mahnke’s pencils.  The Justice League look undeniably heroic; every inch the super-powered heavy hitters we want them to be.  But it is with the Green Lantern himself that the art truly excels.  Even at rest green energy radiates from him.  When Batman tries to remove his ring it crackles and explodes.  Terrifying constructs of Sinestro, the rings former owner, scream forth from it causing Batman to leap back.  Simon Baz is as surprised as anyone at this defence mechanism which he concludes will prevent him getting a fair hearing from the League.  He conjures up a car from the inside out.  I’m a sucker for intricate detail in my comic book machinery and the panel of the naked engine is worthy of Jack Kirby himself. 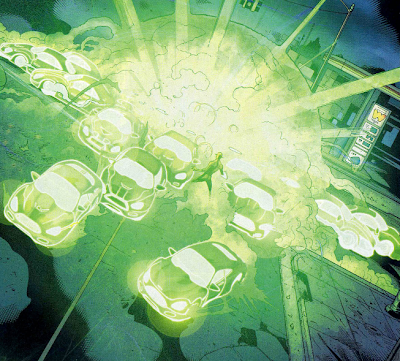 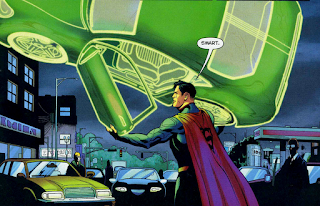 He finally manages to shake off the heroes my creating multiple car constructs to cover this getaway.  The geek in me questions why Flash didn’t use his speed to zoom round them all, or Cyborg didn’t satellite track the occupied vehicle, or even Superman utilise his X-Ray vision but it’s easy to set aside.  The sight of Supes holding aloft a green sports car like a kid shaking his money box is just too good to pass up on.

Baz meets his sister who gives him an address which he hopes might lead him to the bomb-maker while our attention is turned back to the Chamber of Shadows last seen in Green Lantern Annual #1.  The Maltusans contemplate their fate at the hands of the Guardians unaware that they share their prison with Black Hand who is trapped in the adjoining chamber with the body of their murdered brother.  The payoff has been worth waiting for.  GL fans knew that Black Hand locked in a room with a corpse could not pass without incident.  Not one to disappoint he turns the dead man into his own billion year old zombie oracle.  A close up image of Hand’s Black Lantern ring is laden with meaning.  It owner’s involvement with this title is far from over.

And there is also something else.  Within the black ring, somehow, Hal Jordan and Thal Sinestro have been transported into another world, a land of the dead.  Ominously, they are not alone.  A hooded figure suggests that even here in limbo Sinestro cannot escape his many enemies.  The creative team of Johns, Mahnke and co. hit a home run in scene after scene in Green Lantern #14 but never more so than in these final few pages.  I’ve read the book at least four times now and my heart races each time I come across the character gesturing towards a dark apocalyptic cityscape behind him.  The anticipation for the next issue teased as “The Dead Zone” is almost too much to bear.  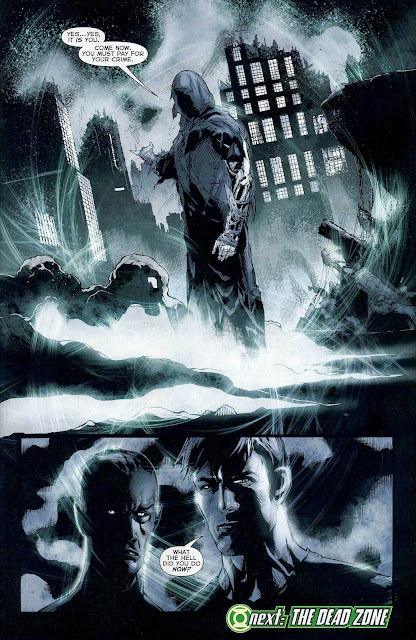