THE GOOD, THE BAD AND THE VERY, VERY UGLY – RED LANTERNS #13 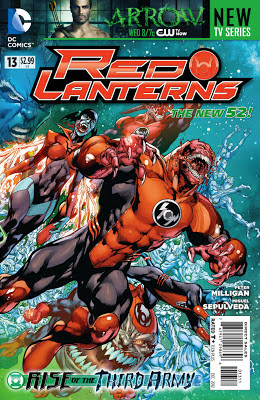 When Sergio Leone described the personalities of his three protagonists in Il buono, il brutto e il cattivo he could not have known how apt it would become in summing the single figure of Atrocitus in DC Comic’s Red Lanterns.  Atrocitus and his Corps dispense a lethal, rage fuelled justice across the Green Lantern universe on behalf of the victimised and abused. Herein, of course, lies both the good and the bad.  And the resulting devastation, much like their leader himself, sure as heck ain’t pretty.
In honour of this undeniable comparison I have elected to keep my overview of the story brief and instead review RL #13 by looking at elements of the book in relation to Leone’s famous movie title.
The issue is part of the GL crossover event ‘Rise of the Third Army’ and the plot is simple enough.  On some distant planet two sisters are enslaved by marauding misogynists for the purposes of serving their every physical need.  The older sister is slain trying to protect her sibling. The younger sister escapes into the care of a local lady only for her husband to betray both of them to the hoard in hope of earning financial reward.  The women are sliced down by Cord, the barbarian king, moments before Red Lanterns arrive and take bloody retribution on all and sundry. The Guardian’s Third Army join the scene to forcibly recruit the Red Lanterns (and anybody else in the immediate vicinity) into their Army.  Atrocitus notices that their eyes have not changed during their horrific transformation and deduces this to be their Achilles heel.  He plunges his thumbs into the eye sockets of their newest inductee, who until moments ago had been the Red Lantern Skorch.  In the final heart wrenching panel the surviving sister is also subsumed into the Third Army’s ranks. 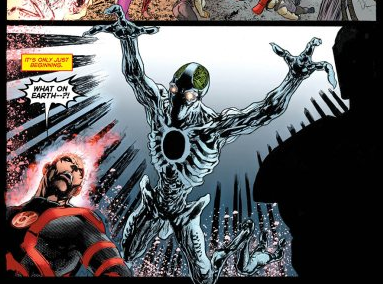 The Good:
** After a year of trudging through the angst of the Atrocitus seeking affirmation of his goals we have finally jumped into some good old fashioned story telling.  In addition we get something that you don’t come across very often in an on-going comic book series - namely a beginning, a middle and an ending.
** The narrative placed the young sister, Taya, as the central character for most of the issue and it was with relief that I discovered Peter Milligan hadn’t the adopted obvious formulaic approach of having her wind up becoming another Red Lantern.
** As the fourth chapter in the ‘Rise of the Third Army’, Red Lanterns #13 works very well.  We have witnessed the parasitic spread of the Army take place gradually over theprevious three episodes.  Now we’re invited to explore their disturbing mission in greater detail.  The tension has been built up sufficiently and now it is ready to pop.
The Bad:
** The dialogue in this book continues to irk me a little.  For the most part the characters talk as if they have just walked off the set of an English period drama.  Even the neanderthalic villains of the piece annunciate with all the clarity of a trained butler.
** The Thirdites (I made that word up.  Feel free to use it!) weakness is in their eyes.  The seemingly invincible, ring-energy-proof servants of the Guardians can be taken down in one with a swift chopstick to the eyeball.  They have gone from ‘Texas Chain Saw Massacre‘ scary to pretty lame.  It’s reminiscent of the Keepers in the first arc of the current Green Lantern Corps book who were impervious to the all-powerful GL rings but not to basic weaponry like lead bullets.
** There are too many narrative voices taking centre stage.  Three different characters, Taya, Atrocitus and Red Lantern Rankorr each take a turn as storyteller in the text boxes littering this issue.  It’s a bit distracting for a book that only runs to 20 pages.
The Ugly:
** Miguel Sepulveda appears not to have received the editorial memo explaining what the Thirdites looked like (see what I did there?).  Or rather he received and chose to ignore it in favour of his own brand of over the top grotesque that suits the tone of Red Lanterns so well.  The creatures are positively skeletal here in comparison to their depictions in the other GL titles brought out earlier this month.  Hip bones and rib cages are on full shocking display.
** Carrying on in the same vein the transformation of a regular person is handled very differently in this book.  Whereas victims elsewhere are touched by a Third Army recruit and shown to have their mouths seal over in the first stage of their mutation, in this case a web fluid extends from their captor’s fingers and wraps itself around their mouth and face.  I actually like the effect quite a lot but it is inconsistent with the rest of the titles included in the ‘Rise’ event.
** Atrocitus rips King Cord’s head clean off his torso in a bloody display fitting for the commander of a rage powered lantern corps.  For gore fans like me it is a juicy delight of a panel. 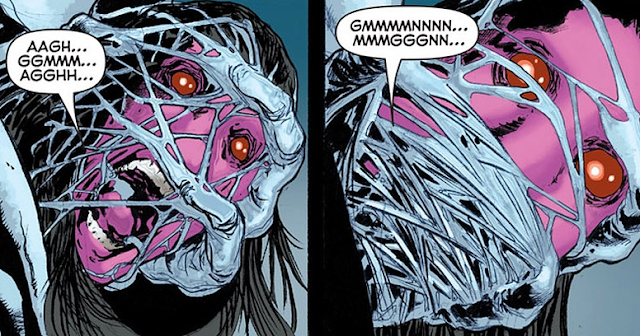 So there you have it. Red Lanterns #13 shares a few great touches and woeful errors in common with the most famous of spaghetti westerns. However, while the book is certainly worth a read, it is never going to be a timeless classic.