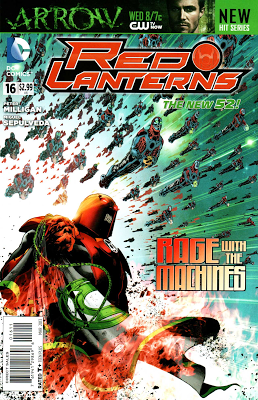 Brightest:
- Possibly due to his reluctance to completely relinquish the hold on his human side, Rankorr has the unique ability among the Red Lanterns of generating constructs.  Unlike the Green Lanterns Corps he does not have complete control of his creations.  He is attacked by a giant manifestation of his late grandfather made real by the insecurities of his own mind.  He realises the power he possesses and refuses to fall for Bleez’s seductions when she tries to manipulate the male Lantern so as to share his dubious gift.  She would make a formidable force if she managed to couple her singularly venomous rage with the potential to produce deadly weapons with a mere thought .
- Another exciting element of Red Lanterns #16 is the hook of slowly introducing the Inversions again.  In this issue they confront Ratchet who stumbled into their lair.  They are hugely ominous.  Peter Milligan has excelled himself in conjuring a dread around these creatures that leaves us with little doubt of the danger they pose to Atrocitus and his followers.   And with the sudden appearance of Krona’s ghostly projection on the final page I am at last on board with the cliff-hangers in this book.  I want to know what comes next.
Blackest:
- The art was a bit ragged at times.  It had none of the horror that we have been spoiled with by Miguel Sepulveda.  The fill-in penciller was Andres Guinaldo.  He didn’t seem overly familiar with the characterisation we’ve had previously.  Rankorr and his compatriots lack their usual menace as do the Inversions.  I was slightly confused when there appear to be six members to the notably named the ‘Five Inversions’.
- The Manhunters.  I can’t quite explain this one which I realise is of very little use in a written medium but there was something that just seemed a little off.  They chatter witlessly like some two-bit henchman from a Batman book.  Like one of the Riddler’s goons.
Beware its power…
- The original Sepulveda cover is staggering.  Atrocitus cuts the figure of a tyrannical war lord, clutching an enflamed Green Lantern flag - or Guardian tabard perhaps!  His terrifying Manhunter army fly in formation behind him.  They stretch out into the distant and each one brandishes a decapitated skull.  Explosions of blinding red and green energy light the sky behind them all.  This is a cover that demands attention. 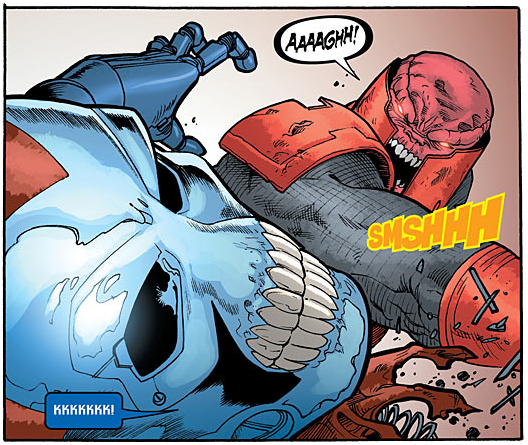