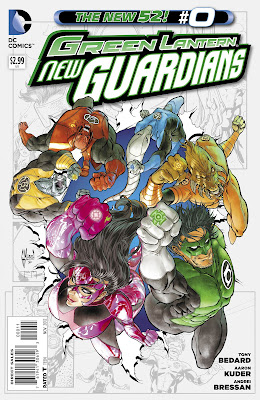  Zero Month continues in the New 52 universe as the spotlight falls on the origins and histories of the DC pantheon.  In Green Lantern Corps #0 Guy Gardner’s convoluted back story has been given a trimming.  Green Lantern #0 is another origin story, albeit the debut of earth’s newest GL, Simon Baz (presumably 2814.5!).  Life, however, is a little different here at Green Lantern: New Guardians #0 basecamp. The story of Kyle Rayner continues right where issue #12 left off and also picks up the pieces of the fallout from the Green Lantern Annual #1.  The cover of the book heralds the coming of an updated team which now includes Atrocitus, leader of the Red Lanterns, and Agent Orange himself, Larfleeze.  This image is a little misleading given that the only two characters depicted that actually feature in the issue are Kyle and Star Sapphire, Carol Ferris.  The book opens with Carol and long-time Green Lantern side-kick Tom Kalmaku getting stuck into their day jobs at Ferris Aircraft.  They are disturbed by an inbound Kyle Rayner seeking out Hal Jordan.  It appears to be some sort of New 52 clean up underway here.  Kyle and Carol exchange introductions in a manner that suggests that they knowledge of each other but have never met before.  In the background a TV newsflash alerts them to Hal’s battle with Black Hand and his undead minions as had already played out in last month’s Green Lantern Annual. 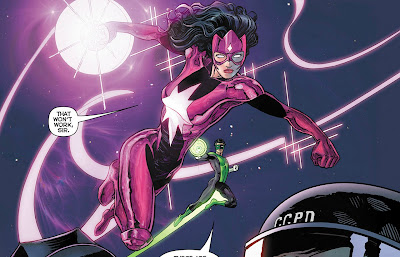 Before long Kyle and the transformed Star Sapphire have joined Coast City P.D. holding back zombies on the perimeter of the local cemetery.  This is the first time we have seen Carol in costume since the DC relaunch and the powers that be have elected to attire her in something a little less revealing and a little more practical than before.  The two heroes recall from Blackest Night canon that Green Lantern energy must be combined with another energy from the emotional spectrum to destroy a Black Lantern.  They join their efforts but are eventually overwhelmed by the sheer weight of numbers opposing them.  All seems lost until Kyle whispers a prayer which allows him to unexpectedly tune into the blue energy of hope.  Artist Aaron Kuder produces an emphatic splash page showing a luminescent Kyle destroy his enemy with blue and green beams extending from his power ring in all directions. 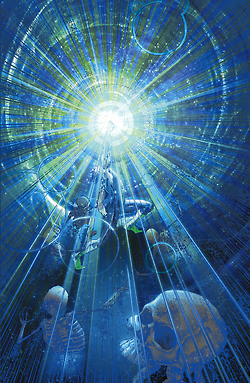 There is another lovely little panel just after this in which he recalls the events of New Guardians #3 when he attempted to wield six different coloured power rings at once.  Demonstrating the residual effects of this event his remaining green ring pops and flares with the energies all six emotions, each one forming a different physical shape above his hand.  The next few pages are basically exposition.  Kyle’s ring informs the pair of Hal’s and Sinestro’s apparent deaths while Carol’s ring contests that Hal is still alive.  The Star Sapphire ring can also predict the future, in this case Kyle’s.  Via the well-trodden GL universe technique of an inconclusive vision, Tony Beddard’s script telegraphs his intention to have Kyle master the powers of the whole emotional spectrum.  We see the six versions of the Green Lantern costumed in each of the other Corps’ uniforms.  The artist has tried to make this a visually eye-catching moment but, for me, it is not nearly as strong as the Book of the Black Vision seen in the recent GL main title.  They have basically tried too hard to put Kyle’s twist on the design of each of these uniforms with hugely lacklustre results. 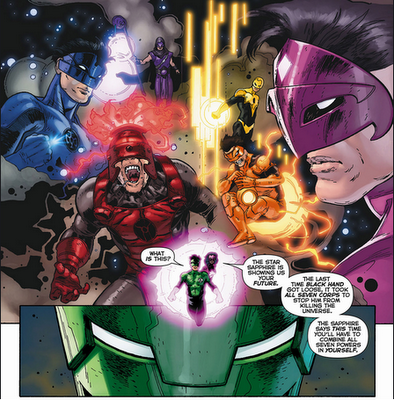 The final page contains an dramatic twist which will have massive consequences for the Star Sapphires in particular.  Their leaders, the Zamorans, have made a pact with the Guardians of the Universe to join their fellow immortals in eliminating all of the lantern Corps including their own followers.  I must admit I did not see this one coming as it rare that the Zamorans and the Guardians agree on anything.

Overall I would consider this book to be a solid read without being in any danger of setting the world alight.  The characterisations ring true and the art is clean.  The zombie scene is pretty well done.  I got a sense of the claustrophobia Kyle faced when he was swarmed by them.  That being said I recall the occupiers of the cemetery as having been defeated thoroughly in the annual by Sinestro’s exploding power battery and I was a bit confused to see them popping  up again here so soon after that book was released.  Instead of being an exciting fresh look at the New Guardians in the way other zero month books have been for their subject matter, this book plods through a good number rehashed and reworked concepts form previous Green Lantern stories over the last five years. 