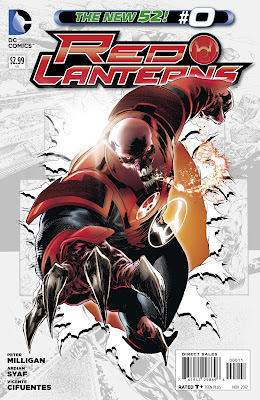 Oh dear… just as the Red Lanterns title looked to be turning a corner this zero issue lands on our pull pile. It is a case of one step forward, two steps back.  Well, that is not entirely fair of me.  The issue sheds light on Atrocitus’ origins.  Geoff Johns and Peter Milligan have both touched on the Manhunter’s massacre of Sector 666 but now we get to see first-hand what the psychiatrist Atros and his family actually went through.  We learn about the formation of the Five Inversions and the creation of the Empire of Tears.  We stand with Atros as he makes his first blood prophecy on the freshly slain corpse of a Guardian of the Universe, and the Guardians punishment of the Inversions in return.  We behold the igniting of the rage fuelled red power battery and the rebirth of Atrocitus as the first Red Lantern.
And all of this is exactly the back-story that I wanted to see in RL #0.  From the opening splash page showing a terrifying giant of a manhunter looming over Atros’ plucky young daughter, through to the final panel prophesying the rise of Bleez and her fellow lanterns, Ardian Syaf’s pencils are superb.  With the exception of a couple of colouring issues (most notably the murdered Guardian’s blood runs red instead of yellow) the art in this book is strong throughout.  The annihilation off 666 and the subsequent destructive path of the Inversions is undisputedly vivid. Yet even with all these great attributes my enjoyment of the book was far from complete. 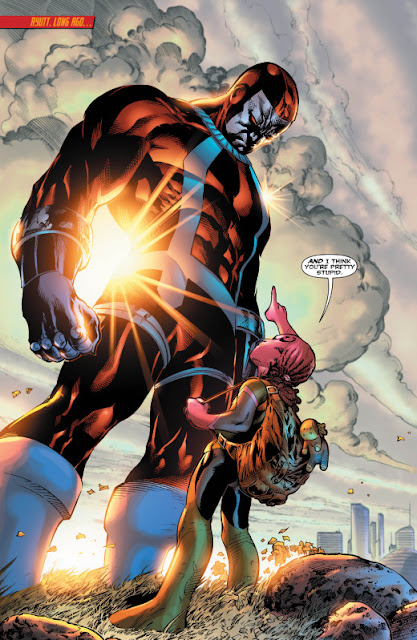 The blame for this lamentable predicament must lie firmly at the door of the writer, Peter Milligan.  The majority of the story is told in narrative form by Atrocitus.  Text boxes litter the comic on every page.  Atrocitius ‘voice’ is poorly written.  He communicates by necessity in monologue, as do many other zero issue characters recounting their own back-story.  But in this case the language is laboured and dry.  Action sequences are reduced to the tone of amateur dramatics or a role playing text written by a first time dungeon master.  This one inexcusable fact makes it impossible to sympathise with the plight of the shattered family man or to revel in righteous anger of the avatar of rage.  His fall from grace in the company of the insidious Inversions should be resplendent in spine tingling horror and is instead ultimately forgettable.  In Red Lanterns #0 a good man became a bad man, and bad did meet evil but the implied tension was just not present.  Shame though it is to say, I suspect the simple truth is that this issue will sit in the back of many long-boxes and never be read again. 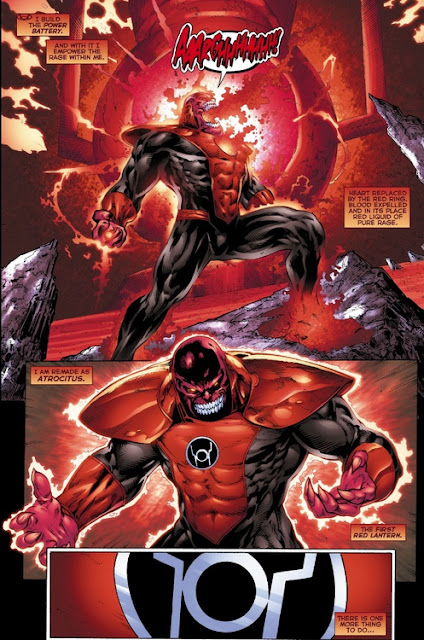