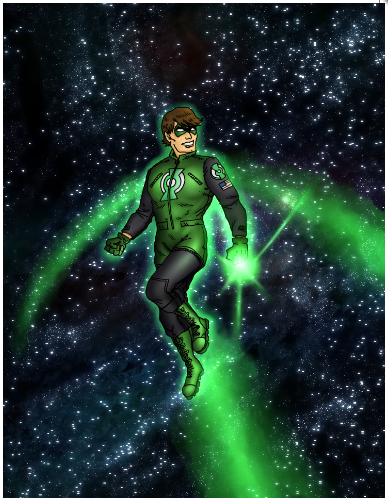 ‏ I was wiling away the hours on twitter a few weeks ago when I came across the following tweet in my timeline: "@Kap_L: First to Rt and Reply gets a free #CBDCU redesign of any DC Vehicle, Superhero or Supervillain.”


@Kap_L is the twitter handle for an artist I follow called Andrew Kapellusch.  Andrew can regularly be found gifting his followers with the spot-prize sketches on all sorts of geekery but this #CBDCU was new to me.  My interest was piqued to say the least.  A challenge had been proffered and I was only too happy to rencounter.


I quickly tweeted back: "@GL875: @Kap_L How about a Guardians of the Universe redesign? Something that says 'Evil little bastards' :)”.  And twitter being what it is I thought that was that, my words would lost in the electronic ether forevermore.  Within mere minutes, however, my smartphone ‘pinged’ and a little blue bird told me somebody had mentioned me on their feed.  Andrew had replied: “#CBDCU Guardians Rough draft. Won and Requested by @GL875 !!! “, and included a link to the awesome sketch below.
I didn’t just win one design, I got three and with a backstory by the looks of things too.  Before long the tweets were pouring in to explain to me the do-over my little blue immortals had received.  I’ve posted the originals tweets below to give you an insight into the weird and wonderful mind that has set about reinventing the DC Comics universe one character at a time.  Not only that but we can see where Andrew worked out the concept of his Green Lantern symbol - of vital importance in any GL mythos! After clicking on a few links Andrew had provided I discovered that he had been commissioned for this project by the fine people at Comic Booked.com, hence the hash tag #CBDCU.  At the time my Guardians were sketched out he had completed redesigns for the DC’s most famous heroes, Superman, Batman and Wonder Woman.  As I post this he has already added Flash, Aquaman and Green Lantern, including the great colour rendition at the top of this blog of Hal Jordan in all new GL flight suit costume.


I am always keen to promote great Green Lantern indie art on Flodo’s Page and Andrew has been gracious enough to let me interview him and to give us a little more insight into what goes into a project like the CBDCU.

FP: Thanks very much for taking time to share a few of words with Flodo's Page.  I first came across you on twitter when you were doing sketches at random as gifts for your followers.  You must like to challenge your skills if you are prepared to have a crack at drawing nearly anything that gets thrown at you?

AK: I love a good challenge...a controlled challenge, that is.  Usually when I run non-CBDCU "free sketch" contests I have a set of rules.  No cartoons, no animals, no anime.  I stopped drawing anime about 10 years ago.  Everybody was doing it. I can't do it anymore!  Cartoons and animals I just suck at.  I hate being locked into a style. I drew a Kingdom Hearts picture for a friend's birthday, but I drew all of them "realistic" because I dislike copying cartoons. (Laughs) ...I'm a big baby.  But I love drawing superheroes so that's what I normally draw for my followers.

FP: As a sequential artist you obviously have a passion for the comic strip format.  Are you a superhero guy at heart or are you interests more wide reaching than that?

AK: I'm a flights and tights guy at my core.  I rarely read other stuff, not to besmirch those other non-hero books at all.  Sequential art is a powerful format and can make a lot of boring stuff interesting but that's a two sided coin.  It can also make really interesting stuff boring.  I love watching documentaries and have a pretty decent hunger for knowledge, but I hate reading comics about real world stuff.  I read comics to escape so I read a lot of superhero stuff.  Kirby-era Marvel, Valiant and everything DC.  I can't get enough of DC Comics!  So happy Aquaman is finally getting the respect he deserves in mainstream comics.  Not all of the changes have been good.  I think I vastly prefer my version but then again I'm partial.

FP: I've been blown away by your DCU redesigns for Comic Booked.  You have a spin that respects the original character but brings something a little different to the table. How do you come up with your ideas? Does the art come first with the origin story filled in later?

AK: You are far too kind. Seriously, thank you.  That's what I've been striving for, different but new.  Something nobody else has really touched on before.  I talked a lot with my friends and followers online to get the story down.  Batman was the only one I started drawing before I knew what I was doing.  Like the DCAU, I kind of spun off of (my ‘Tactical’ version) Batman.  From that foothold I kind of knew where I wanted to go with Supes, then Wondy.  After that the story was a piece of cake. I bounced a lot of ideas off of my buddy Sam at Ravingnerd and we kind of collaborated on a few heroes.  He's a good dude.  My Dad is also a huge DC guy, so I got a lot from him.  Crowdsourced DC - by the fans, for the fans.


FP: The CBDCU is really capturing the imagination of comic fans with a number of sites and blogs supporting you outside of Comic Booked themselves.  But where did the original idea come from for the CBDCU and how did you get involved in the project?

AK: I actually drew Batman for a ‘Redesign’ free sketch contest for my now good friend, Jordan, who is the Chief Creative Officer for Comic Booked.com.  He was really excited about it, so he was like "We gotta have you do something for the site".  I was like, "Right on, man!".  I knew my love of DC Comics would come in handy some day! (Laughs)  I've been super lucky with the opportunities given by Comic Booked and Jordan.  It's a lot of work but it's something I love and you can't beat that.

FP: You started the project by redesigning the 'Big 3', the holy trinity of DC Comics: Superman, Batman and Wonder Woman.  Now that you have established the world of the CBDCU who would you most like to redesign?  Are there any obscure characters that you are itching to turn your talents to?

AK: Oh, man. Great question.  The JLI come to mind.  Booster and Ted are two of my all-time favorites, so that'll be great. Looking forward to a lot of the Green Lantern Corps, Blue Lanterns, Red Lanterns.  Characters like Tomar-Re, Kilowog, Mogo, Saint Walker, Atrocitus and Dex-Starr.  I'm a huge Blue Lantern fan.  The deeper you go into Batman or Flash's rogues galleries the crazier things get.  I've got a KILLER Kite Man worked up.  It will make you cry.  He's one of the lamest guys ever but my redesign is so sad…  I'm starting to mist up just thinking about it.  The JSA is going be a big deal!  Mark my words.  I've got 30 redesigns easy between the two earths.  So yeah, I guess... all of ‘em!

FP: You've done some great images for Flodo's Page and you can clearly produce your initial designs at speed. How much work is involved in bringing those concept sketches up to CBDCU standards with the color templates, background script and everything else that goes into them?

AK: I usually work about five to seven hours on them. Thank goodness I had my teen sidekick Lil' Luke Fairhead from Australia throwing some awesome colors down on the initial seven redesigns. You'll be seeing more of his coloring along the way, also some of my watercolors. I enjoy every moment I spend working on it though. Seriously, I have no idea how Jordan edits all of my words in time to get them up. I'm horrible with grammar’ and type like I speak. He hasn't sent anything back yet but I'm waiting. I know one week he'll just send it back with a one word reply of like "No."

FP: I don't want to take up too much of your time so one last question for the road... If you could give the CBDCU treatment to one person or character outside of the DCU and bring them into your world who would it be? Another comic book or movie character, or maybe a real living person. What would you do to put the 'A to the K' flavour on their story?

AK: A tough question to be sure. Let me see... Ok, I've got it!  For comics, definitely down the road I'll be doing the original Avengers, and maybe some Spidey stuff. I'd love to take a crack at the current stable of Valiant characters. I'm probably the world's biggest Archer and Armstrong fan so that'd be cool. I'd probably do them as characters in the thirties. Make then pulp heroes. I'm writing that down. That's a good idea! It's as easy as that kids!

From TV I’d love to do Doctor Who! Also Being Human, Community. And No Ordinary Family. They needed costumes! COSTUMES!!

Cartoons would be Thundercats, breaking my "No Animals" and "No Cartoons" rules. That's how much I love Thundercats. And maybe Adventure Time. And Dexter's Lab. Like Dexter as a teen or something.

Real Life? Oh man... I don't watch wrestling anymore, like, since 2000 but I'd love to redesign the WWE and their sort of universe. Give them some better, less racist and sexist story lines.

FP: It sounds like you are going to be busy! Thanks again for taking the time to speak to us today and, of course, for all the great sketches. I'll be looking out for more Green Lantern Corps redesigns in the future and in the meantime the CBDCU Flodo Span will be taking pride of place here at Flodo's Page.

AK: Thanks! Anytime. I'll be keeping Flodo's Page updated with any and all GL stuff as it gets made. Thanks for having me! And remember... Hope burns bright!