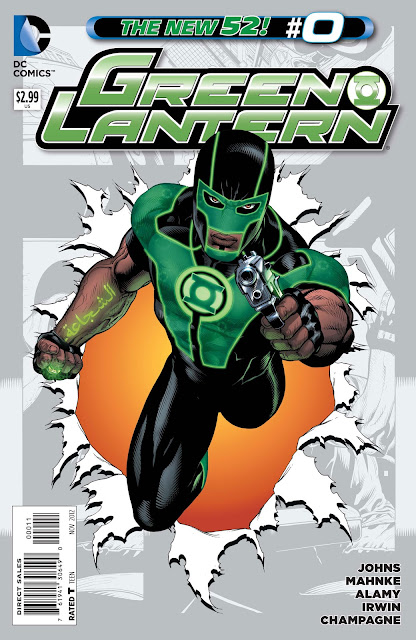  As most visitors to Flodo’s Page will no doubt be aware September was “zero month” in the DC universe.  After a year of getting to know our heroes DC decided that it was high time to drop a few origin stories in our laps.  Where Green Lantern differed to most of the rest of these books is that we didn’t get the origin to either of the characters we have been following in the title over the previous 12 months, Hal Jordan and Thal Sinestro.  Instead we were introduced to Simon Baz, a brand new character gracing our pages and taking up the Green Lantern mantel for the very first time.
It was an audacious move by the publisher and one not without controversy.  Images of this cowl attired lantern wielding a semi-automatic pistol have been splashed across the comic book back pages and blog sites for months.  Opinion has been firmly split, albeit between the’ I’m not too sure yet’ crowd and the ‘this is a complete bloody travesty, I’m cancelling my pull-list and switching to Marvel’ crowd.  If twitter were to be believed this creation, one that is clearly close to writer Geoff Johns' heart in that it was reputedly modelled after his own experiences, was never going to get a fair hearing.

As a result I held off on posting a review for GL #0 when it was released last month.  I wanted to be sure how I felt about Baz and his introduction into the Green Lantern universe.  I took a chance that his origin was too long to share completely in 20 pages and held off publishing my conclusions until after the release this following month of Green Lantern #13.  And in that regard I was not disappointed.  For me then, GL#0 and GL#13 read together as one complete double issue prologue in preparation for the main event – the trials and tribulations of Green Lantern Baz of sector 2814.
Johns had no intention of steering away from the controversy that preceded this book beginning as he does with images of an Arabic-American family watching television with looks of horror and tears streaming down their faces.  Reflected in the eyes of their eldest child are the burning twin towers of the World Trade Centre attack.  As a result of that tragedy the boy spends  the next 10 years of his life being abused and victimised by a culture who treat all Muslims as potential terrorists.  Personally, I found these two pages very moving.  Doug Manke’s pencils capture the adversity Baz and his family face in a very impactful manner.  But at the same time the geek in me recognises that 9/11 did not happen in the DC universe, at least not prior to the reboot as the New 52. 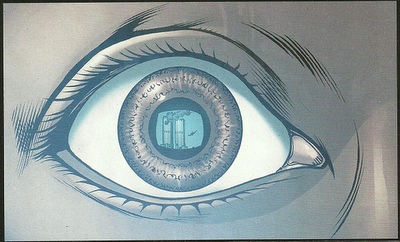 We fast forward to the present day were Simon is caught up in a police chase when he is startled by the realisation that the stolen van he’s driving contains a massive time bomb.  The digital display confirms that it is live and slowly ticking down to zero.  Showing little regard for his own safety the former automotive engineer takes immediate evasion action and drives the bomb into the grounds of an abandoned factory and just manages to throw himself from the moving vehicle before it detonates.  This is bravery indeed but if he hadn’t it might have been a very short book…

The action switches to a prison in Guantanamo where our hero has understandably been detained for committing acts of terrorism against the United States.  The security services best interrogators can’t get Baz to admit that he is complicit in the bomb plot.  The tension is ramped up when he is hooded and escorted to a room contained a table fitted out with arm and leg restraints.  The implication is torture and even the US agents can’t agree on the moral proclivities of the line of questioning they are about to pursue.  There is a great panel in this sequence showing the terrified prisoner’s face from under hood.  Manke provides us with enough stylized light with to see the fear in his eyes and sweat beading on his forehead.   With the instincts of a cornered animal he punches wildly in the dark to make a futile break for freedom. 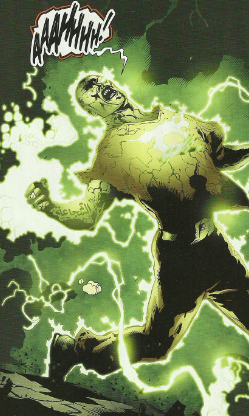 Just as all seems lost a Green Lantern ring comes crashing through the prison walls and attaches itself to Simon’s finger.  But something is wrong.  The ring has an error in its programming.  Instead of transforming him into a Lantern as expected, the ring electrocutes him.  Lightning crackles and stabs at him causing him to scream out in pain.  I don’t know if this is a deliberate choice by the colourists, Avina and Sinclair, but in comparison to other GL books the green light given off by the ring here is unpleasant and sickly.
Baz is launched with a boom through the ceiling of the interrogation cell.  And make no mistake about it.  This was not the exit of a silver-age lantern gliding effortlessly like a ghost through solid wall.  This departure leaves a gaping hole and a trail of destruction in its wake.  News of his escape is immediately passed to Amanda Waller and does not go unnoticed by the Justice League.  In a teaser panel we briefly glimpse the transformed Third Army slave introduced in Green Lantern Annual before our attention is brought back to an unconscious Simon Baz lying prostrate in a field.  Green energy wisps and smokes around him like the aftermath of an explosion.  He is unaware that his new ring is trying to alert him to a mysterious waiting message.

Elsewhere, in a one page epilogue, Hal Jordan and Sinestro apparently survived their ordeals of the previous issue and are trapped by an unearthly black energy. 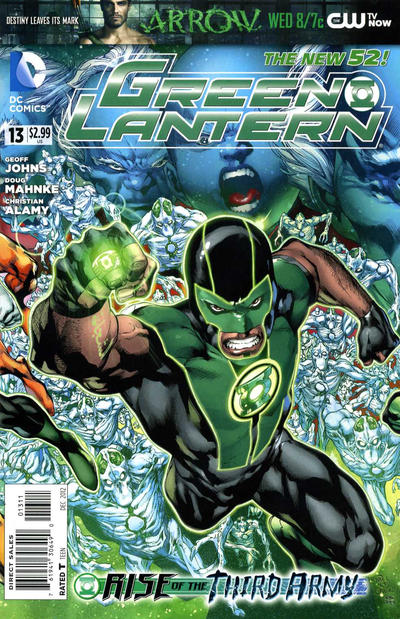 As Green Lantern #13 opens we are back with Amanda Waller, this time briefing the US president on the identities of earth’s Green Lanterns and, of course, the recent activity of Simon Baz. The president demands that she call in the Justice League to pursue the escaped terror suspect.  Meanwhile the man in question continues to lie unconscious somewhere on the southern coast of Florida while the ring recalibrates itself to him, making the reader aware of an incident in his past that involved street racing.  He wakes suddenly to find himself floating a foot or two above the ground in a GL uniform.  The message telegraphed at the end of the previous issue begins to play. 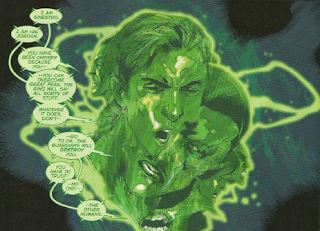 The message itself is conveyed via a great piece of artwork.  The vibrant greens of Alex Sinclair’s colourings are back at their best in the rendering of  a contorted morphing of Hal and Sinestro into a light construct that is reminiscent of Pablo Picasso on LSD.  The words attached are a mesh of the two previous ring wielder’s final thoughts before their sudden disappearance in a battle with Black Hand and the Guardians of the Universe.  Despite this, the message could not be clearer.  Get help, and stay the hell away from Oa!
A tattoo quoting the word ‘courage’ in Arabic glows green on Simon’s arm as he flies into the heavens, one step ahead of the authorities who are hot on his tail.  The newest lantern’s use of the green energy is bold.  He doesn’t just ‘take off’ or ‘land’.  A more accurate description is that he ‘launches’ himself into the air and when he returns to terra-firma it is with all the force of a meteorite carving out craters from the ground beneath him.

In this issue Geoff Johns sets out to give us a deeper exploration of the lead character’s background.  Away from the action, scenes with his father and sister show the problems his predicament has heaped upon his family.  His sister, Sira, is sacked from her job amidst fears for her colleagues’ safety.  It transpires Simon had already brought hardship down on those closest to him when his brother-in-law was left comatose in an illegal car race between the two.  He is desperate to lift the shame he has brought to their doors and wants to use his sister’s contacts to help identify the person he believes is responsible for setting him up.  Despite all that has passed between them in recent years his sister clearly loves him and remembers times when he fought to protect her from the torments of bigoted troublemakers.

Elsewhere the Guardians Third Army expands relentlessly, adding a transformed truck driver and hitchhiker to their numbers.  Under the Guardians instruction their primary pursuit is to track and assimilate Green Lantern ring slingers.  Like all the best horror movies the mouthless aberrations seem unstoppable.  In one panel they appear to reach out through the fourth wall to grab at us readers and drag us into the page, another unwilling victim of their ghoulish nightmare.

Back in his hometown of Dearborn, Michigan, Simon wills a full head mask to cover his features from a prying security camera.  In my opinion, this latest GL costume is pretty poor.  There is barely any green on it.  The back appears to be a black one piece leotard that would be more suited to a winter Olympian.  Where the green does appear on the chest, shoulders and boots, it glows in a way that just doesn’t sit right.  It is, perhaps, most similar to John Stewart’s uniform but it has none of the tangibility of his new look metallic shoulder pads.  The mask is worst of all - it looks like a bad imitation of Mr Terrific’s facial T-plate. 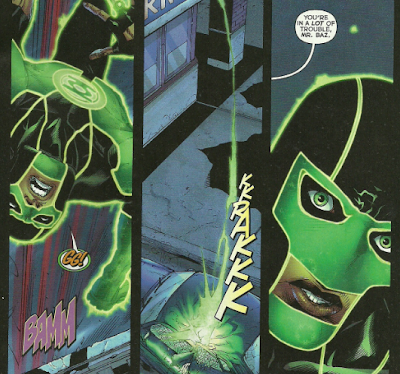 Suddenly, a blue red blur knocks Baz from his rooftop perch.  Before he can draw breath a heroic voice informs him he is in a lot of trouble, “like Justice League trouble”.  In the final poster-worthy splash page the entire league led by Superman bear down on him.  Manke draws a mighty cool JL, better in my assessment than the work Jim Lee does in the League’s own title.  But for the record the yellow glowing lines on Flash’s costume look just as terrible as the Green ones on Baz’s, and he doesn’t even have the excuse of being new to the super-hero business!  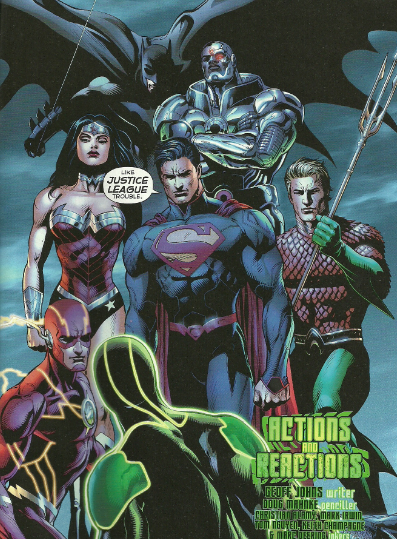