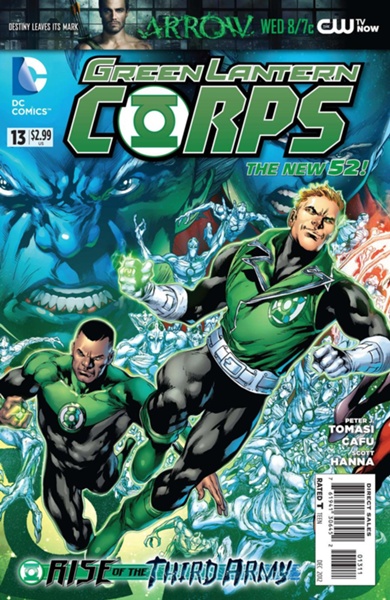 With GLC #13 the Rise of the Third Army storyline kicks up a gear, so if you’re getting tired of the Guardians evil machinations you might want to sit this one out. Me, I’m in it for the long haul and happy to be there.

As plans go the attack strategy of the Army is a simple one: travel through space and possess any innocents who are unfortunate enough to cross their path. At the moment they really do seem unstoppable, defeating all before them with the merest touch. And to be quite honest, this 'invasion of the body snatchers' scenario is the main focus of this issue. In the opening pages a team of space miners are added to their ranks in moments. Although this was great dialogue free story-telling I have got to ask the question to anyone who has read the book: page 2, panel 2 – does that guy have Third Army fingers growing out of his head?! Most confusing…

Guy’s zero issue origin is referenced as, Xar, the big bad from his rookie showdown is busted out of the Oan subcells (hmm… I wonder who did that?) Guy himself is supposedly ‘honoured’ with a promotion to the highest rank a Lantern can have as Sentinel of the Corps. The ceremony takes place in front of the legendary Book of Oa which is a geek out moment for any GL fan. That book looks mighty impressive.

While Guy gathers a crew to act as a security envoy for some intergalactic warmongers engaged in peace talks, John Stewart is summoned by the Guardians to investigate the apparent regeneration of Mogo, the sentient planet executed by Stewart in War of the Lanterns. This should be geek out moment number two. There’s barely a Green Lantern fan alive who wouldn’t relish the return of Mogo to the Corps but I can’t help thinking this is a play on the Guardian’s part to manipulate John so I am not getting my hopes up just yet.

I love the artwork we get from Cafu, Scott Hanna and Gabe Eltaeb. It is clear and well defined. Admittedly a lot of the story is set in deep space with black star studded backgrounds but at least we don’t drown in green and green on a green background as can sometimes be the case with this title. I particularly like the panel of the hovering Guardians drawn from a lower perspective. It looks like the immortals have evolved beyond feet! There is a reminiscence of Orco from the old He-Man cartoons but with less funny side kick and more EVILLL. 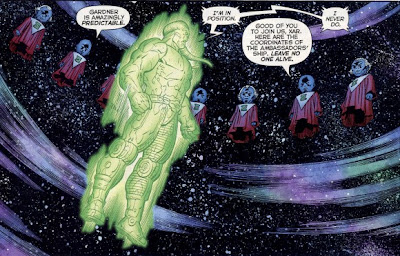 When Guy hears about the escape of his greatest enemy he assumes the worst and breaks from his appointed mission to determine the safety of his family millions of miles away on Earth.  The Guardians predict he would abandon his post.  They send Xar to annihilate the negotiators and presumably intend to pin the disaster on Gardner for disserting his post.  It has to be said that Guy comes across as fairly two dimensional in this issue.  He serves more as a plot device to keep the narrative moving than as a character of any depth and the words put in his mouth don’t have the depth or conviction I would normally expect from Peter Tomasi’s writing.

Matters go from bad to worse for the Lantern Sentinel and his crew when agents of the Third Army attack them en route. Worryingly, the assailants show a healthy resistance to the effects of power rings. The book closes on the final moments of Vandor of sector 3212 as he succumbs to the powers of the Guardian’s silent minions and is transformed into one of their number. As ever, Green Lantern Corps does not shy away from graphic depictions of violence. In this instance Vandor’s arm is ripped from his torso only to be replaced by a new appendage as part of his transformation. Another panel shows his heart been pulled bloodily from his chest. The scene runs to five pages which may seem overlong in a twenty page monthly comic book but Vandor isn’t just another bit character. He was introduced by Dave Gibbons in the first issue of Green Lantern Corps Vol. 2 back in 2006 and his death represents a notion that no character should be considered safe in this crossover event. The final full page splash of his new form surrounded by the ruined trappings of his GL uniform and torn limbs is poignant. Only Vandor’s pure white eyes remain, staring out from the skull of this frightening vestige. 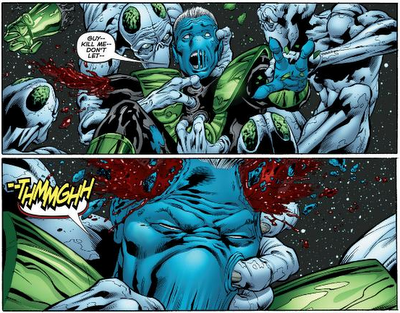